‘Europa in a can’ may be the clue to what’s happening on Jupiter’s most intriguing moon. Created by JPL’s Kevin Hand and Robert Carlson, ‘Europa in a can’ is the nickname for a laboratory setup that mimics conditions on the surface of Europa. It’s a micro-environment of extremes, as you would imagine. The temperature in the vacuum chamber is minus 173 degrees Celsius. Moreover, materials within are bombarded with an electron beam that simulates the effects of Jupiter’s magnetic field. Ions and electrons strike Europa in a constant bath of radiation.

What Hand and Carlson are trying to understand is the nature of the dark material that coats Europa’s long fractures and much of the other terrain that is thought to be geologically young. The association with younger terrain would implicate materials that have welled up from within the moon, providing an interesting glimpse of what is assumed to be Europa’s ocean. Previous studies have suggested that these discolorations could be attributed to sulfur and magnesium compounds, but Hand and Carlson have produced a new candidate: Sea salt. 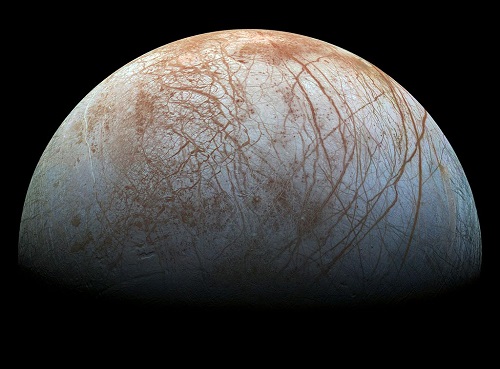 Image: The Galileo spacecraft gave us our best views thus far of Europa, with the discolorations along linear fractures rendered strikingly clear in this reprocessed color view. Credit: NASA/JPL.

Intense radiation peppers Europa’s surface with particle accelerator intensity. It becomes part of the story, causing the discoloration evident in the terrain. Hand and Carlson tested a variety of candidate substances, collecting the spectra of each to compare them with what our spacecraft and telescopes have found. Sodium chloride and various salt and water mixtures proved the most potent substance. When bombarded with the electron beam, they turned from white to the same reddish brown hues found on Europa in a timeframe of tens of hours, which corresponds to about a century on Europa. Spectral measurements showed a strong resemblance to the color within Europa’s fractures as seen by the Galileo spacecraft. 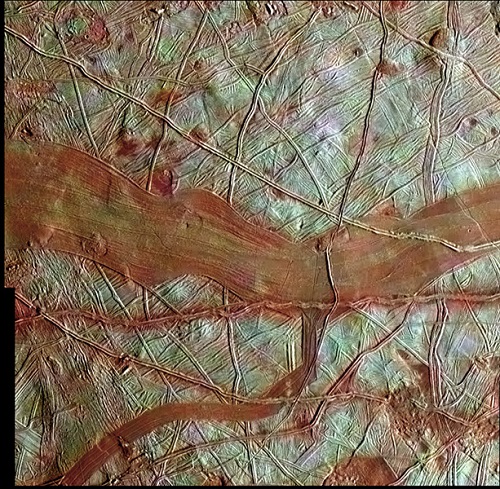 Image: A closer look at Europa. This is a colorized image pulled from clear-filter grayscale data from one orbit of the Galileo spacecraft combined with lower resolution data taken on a different orbit. The blue-white terrain indicates relatively pure water ice. The new work indicates that although some of the colors of Europa come from radiation-processed sulfur, irradiated salts may explain the color of the youngest regions. Highly intriguing is the possibility that these surface features may have communicated with a global subsurface ocean. Credit: NASA/JPL.

Finding sea salt on Europa’s surface would imply interactions between the ocean and the rocky seafloor, according to this JPL news release, with astrobiological implications. In any case, “This work tells us the chemical signature of radiation-baked sodium chloride is a compelling match to spacecraft data for Europa’s mystery material,” says Hand, who speculates that because the samples grew darker with increasing radiation exposure, we might be able to use color variation to determine the age of features on the moon’s surface.