Exoplanets: The Hunt for Circular Orbits

If you’re looking for planets that may be habitable, eccentric orbits are a problem. Vary the orbit enough and the surface goes through extreme swings in temperature. In our own Solar System, planets tend to follow circular orbits. In fact, Mercury is the planet with the highest degree of eccentricity, while the other seven planets show a modest value of 0.04 (on a scale where 0 is a completely circular orbit — Mercury’s value is 0.21). But much of our work on exoplanets has revealed gas giant planets with a wide range of eccentricities, and we’ve even found one (HD 80606b) with an eccentricity of 0.927. As far as I know, this is the current record holder.

These values have been measured using radial velocity techniques that most readily detect large planets close to their stars, although there is some evidence for high orbital eccentricities for smaller worlds. Get down into the range of Earth and ‘super-Earth’ planets, however, and the RV signal is tiny. But a new paper from Vincent Van Eylen (Aarhus University) and Simon Albrecht (MIT) goes to work on planetary transits. It’s possible to work with Transit Timing Variations to make inferences about eccentricity, but these appear only in a subset of transiting systems.

Instead, van Eylen and Albrecht look at transit duration. The length of a transit can vary depending on the eccentricity and orientation of the orbit. By measuring how long a planetary transit lasts, and weighing the result against what is known about the properties of the star, the eccentricities of the transiting planets can be measured, as explained in the paper:

Here we determine orbital eccentricities of planets making use of Kepler’s second law, which states that eccentric planets vary their velocity throughout their orbit. This results in a different duration for their transits relative to the circular case: transits can last longer or shorter depending on the orientation of the orbit in its own plane, the argument of periastron (ω)… Transit durations for circular orbits are governed by the mean stellar density (Seager & Mallen-Ornelas 2003). Therefore if the stellar density is known from an independent source then a comparison between these two values constrains the orbital eccentricity of a transiting planet independently of its mass…

Using these methods, the researchers have measured the eccentricity of 74 small extrasolar planets orbiting 28 stars, discovering that most of their orbits are close to circular. The systems under study were chosen carefully to avoid false positives — the team primarily used confirmed multi-transiting planet systems around bright host stars, and pulled in asteroseismological data — information on stellar pulsations — to help determine stellar parameters. Asteroseismology can refine our estimates of a star’s mass, radius and density. The stars in the team’s sample have all been characterized in previous asteroseismology studies. 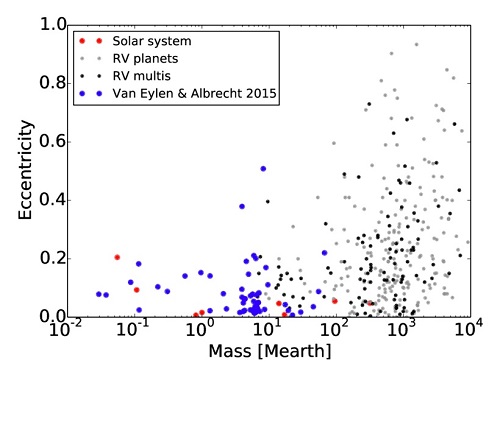 Image: Researchers measuring the orbital eccentricity of 74 small extrasolar planets have found their orbits to be close to circular, similar to the planets in the Solar System. This is in contrast to previous measurements of more massive exoplanets where highly eccentric orbits are commonly found. Credit: Van Eylen and Albrecht / Aarhus University.

No Earth-class planets appear in the team’s dataset, but the findings cover planets with an average radius of 2.8 Earth radii, while orbital periods range from 0.8 to 180 days. Van Eylen and Albrecht conclude that it is plausible that low eccentricity orbits would be common in solar systems like ours, a finding that would have ramifications for habitability and the location of the habitable zone.

Interestingly, when weighed against parameters like the host star’s temperature and age, no trend emerges. But in systems with multiple transiting planets on circular orbits, Van Eylen and Albrecht believe that the density of the host star can be reliably estimated from transit observations. This information can help to rule out false positives, a technique they use to validate candidate worlds in several systems — KOI-270, now Kepler-449, and KOI-279, now Kepler-450, as well as KOI-285.03, now Kepler-92d, in a system with previously known planets.

The work has helpful implications for upcoming space missions that will generate the data needed for putting these methods to further use:

We anticipate that the methods used here will be useful in the context of the future photometry missions TESS and PLATO, both of which will allow for asteroseismic studies of a large number of targets. Transit durations will be useful to confirm the validity of transit signals in compact multi-planet systems, in particular for the smallest and most interest[ing] candidates that are hardest to confirm using other methods. For systems where independent stellar density measurements exist the method will also provide further information on orbital eccentricities.

The TESS mission (Transiting Exoplanet Survey Satellite) is planned for launch in 2017, and is expected to find more than 5000 exoplanet candidates, including 50 Earth-sized planets around relatively nearby stars. PLATO (PLAnetary Transits and Oscillations of stars) will likewise monitor up to a million stars looking for transit signatures, with launch planned by 2024.

The paper is Van Eylen and Albrecht, “Eccentricity from transit photometry: small planets in Kepler multi-planet systems have low eccentricities,” accepted for publication at The Astrophysical Journal (preprint). An Aarhus University news release is available.