LightSail Glitch: Hoping for a Reboot

The Planetary Society’s LightSail won’t stay in orbit long once its sail deploys, a victim of inexorable atmospheric drag. But we’re all lucky that in un-deployed form — as a CubeSat — LightSail can maintain its orbit for about six months. Some of that extended period may be necessary given the problem the spacecraft has encountered: After returning a healthy stream of data packets over its first two days of operations, the solar sail mission has fallen silent.

Jason Davis continues his reporting on LightSail, with the latest update on the communications problem now online. We learn that the suspected culprit for LightSail’s silence is a simple software glitch. Everything else looked good when communications ceased, with power and temperature readings stable. Davis explains that during normal operations, LightSail transmits a telemetry beacon every 15 seconds. The Linux-based flight software writes data on each transmission to a .csv file, a spreadsheet-like record of ongoing procedures.

This file continues to grow, and when it reaches a certain size, trouble can happen:

As more beacons are transmitted, the file grows in size. When it reaches 32 megabytes—roughly the size of ten compressed music files—it can crash the flight system. The manufacturer of the avionics board corrected this glitch in later software revisions. But alas, LightSail’s software version doesn’t include the update.

Late Friday, the team received a heads-up warning them of the vulnerability. A fix was quickly devised to prevent the spacecraft from crashing, and it was scheduled to be uploaded during the next ground station pass. But before that happened, LightSail fell silent. The last data packet received from the spacecraft was May 22 at 21:31 UTC (5:31 p.m. EDT). 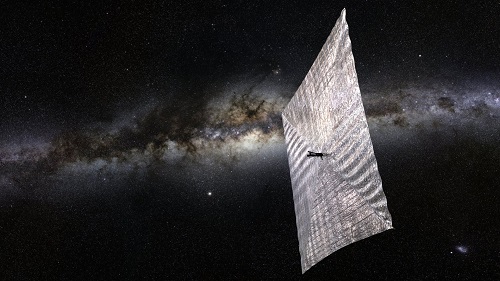 Let’s hope we’ll still see a deployed LightSail, as in the image above. But anyone who has stared at a PC frozen into immobility knows the feeling that LightSail’s ground controllers must have experienced. The machine is not responding, which means it’s time for a reboot. A manual reboot being out of the question, a reboot command from the ground has to be used, and more than one has been sent. In fact, Cal Poly has been transmitting a new reboot command every few ground station passes. So far, no luck.

A fix may still be in the works from a natural source, but first, the situation led to a bit of humor, in the form of an email Davis received, as recorded in this tweet:

Davis also suggests a LightSail successor to be called BourbonSat, a flight spare that sits in each team member’s kitchen to offer quick stress relief. The humor is edgy but that’s because we may now be reliant on a hands-off fix: Charged particles striking an electronic component in just the right way to cause a reboot. If that sounds extreme, be aware that the phenomenon is not unusual in CubeSats. In fact, Cal Poly’s experience says that most reboot within the first three weeks of operations. You can place this in the context of the 28-day sail deployment timeline and see we might come out just fine.

What happens next depends upon when — and if — that reboot occurs, assuming the continued reboot commands from the ground are not effective. Various software fixes are being tested to see which could be inserted after contact is restored, so that the troublesome .csv file doesn’t cause further problems. Davis also says that when LightSail comes back online, the team will probably begin a manual sail deployment as soon as possible. Let’s make sure, in other words, that when we have a communicating spacecraft, we do what we sent it out there to do.