A Kuiper Belt in the Making

The Scorpius-Centaurus OB association is a collection of several hundred O and B-class stars some 470 light years from the Sun. Although the stars are not gravitationally bound, they are roughly the same age — 10 to 20 million years — their formation triggered by a series of supernovae explosions in large molecular clouds. Now the Gemini Planet Imager on the Gemini South instrument in Chile has uncovered a young planetary system within the association, one with solid similarities to our own Solar System in its infancy.

In fact, says lead author Thayne Currie (Subaru Telescope), the ring orbiting the star HD 115600 could be a Solar System clone. “It’s kind of like looking at [our] outer solar system when it was a toddler,” the astronomer adds, noting that the ring is about the same distance from its host star as the Kuiper Belt is from the Sun, receiving about the same amount of light from an F-class star that is about fifty percent more massive than our own G-class Sol. 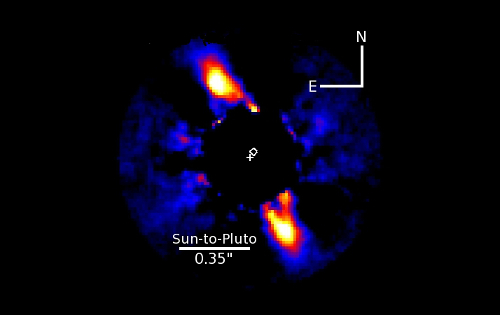 Image: The F-class star HD 115600 showing a bright debris ring viewed nearly edge-on and located just beyond a Pluto-like distance to its star. One or more unseen planets are causing the disk center to be offset from the star’s position (cross). Credit: Thayne Currie/NAOJ.

Distortions in the observed debris disk indicate that it is interacting with at least one thus far unseen planet, creating an eccentricity in the disk itself that is among the largest yet observed. A gas giant of Jupiter or Saturn class could explain the distortions, but there are also other possibilities depending on the models used — the researchers explored ‘gap opening’ models as well as ‘planet stirring’ explanations. From the paper:

Interior to ∼ 30 AU only a superjovian-mass planet can sculpt the ring by gap opening… Planets with masses and semimajor axes comparable to the outer solar system planets could stir the disk to appear as a bright debris ring with an eccentricity of 0.1–0.2 (e.g. a Saturn with e = 0.2). In both cases, Super-Earths just interior to the ring edge could sculpt the ring.

So we have a range of planetary possibilities here amidst a disk whose spectrum shows similarities to the Kuiper Belt, with a composition of ice, silicates and dust, although the researchers note that HD 115600’s disk is, in comparison with other debris disks, more efficient at scattering starlight, implying a higher percentage of ices:

Even so, it’s clear that HD 115600 is a promising source for further information about the early development of disks like the Kuiper Belt, with clear evidence for the sculpting effects of at least one planet. This work was conducted with the Gemini Planet Imager, a new generation of adaptive optics instruments whose numbers are soon to grow. The HD 115600 system thus becomes a useful reference as we tighten our focus on planet-disk interactions.

The paper is Currie et al., “Direct Imaging and Spectroscopy of a Young Extrasolar Kuiper Belt in the Nearest OB Association,” in press at The Astrophysical Journal Letters (preprint). A Subaru Telescope news release is available.