What a time for space missions, with data returning from far places and a nail-biter close at hand. On the latter, be advised that the LightSail mission team has decided to divide sail deployment into two operations, one of them starting today as the CubeSat’s solar panels are released and an imaging session verifies the craft is ready for sail deployment. The actual deployment will then follow on Friday, and is currently scheduled for 1647 UTC (1247 EDT).

The first indication the sail sequence has started should come from the spacecraft’s automated telemetry signals, which include a motor revolution count for the boom system. The next few orbits will be used to check LightSail’s health and status, transfer imagery from the cameras to flight computer, and begin sending home to Earth.The last contact of the day comes during a Cal Poly ground pass at 4:16 p.m. EDT (20:16 UTC). By then, the team hopes to at least part of a sail image on the ground. If not, the next series of ground pass orbits begin at 2:45 a.m. EDT Saturday.

At the outer edge of the system (or, if you prefer, the inner edge of the Kuiper Belt), New Horizons pushes on toward Pluto/Charon. As we wait with great anticipation for the views that lie ahead, a new study published in Nature looks at what we have learned about Pluto’s moons, with interesting findings regarding Nix and Hydra. Evidently the gravitational interactions in this system are complex, with the smaller moons tumbling unpredictably. But if the rotational motions are odd, the Plutonian moons’ orbits are governed by resonance.

“The resonant relationship between Nix, Styx and Hydra makes their orbits more regular and predictable, which prevents them from crashing into one another,” says Douglas Hamilton (University of Maryland). “This is one reason why tiny Pluto is able to have so many moons.”

We also learn that tiny Kerberos, discovered in 2011, is distinctively dark compared with the other moons. We can hope that New Horizons helps to solve the riddle of this variation. The study in Nature is based on a new analysis of Hubble Space Telescope data on the four smaller Plutonian moons. Hamilton notes that because Pluto and Charon comprise a binary system, what we learn about the orbits of moons here may help us understand how planets could behave orbiting a binary star, useful information for the exoplanet hunt.

Meanwhile, the New Horizons team has reported that the first set of hazard-search images of Pluto/Charon show, at least so far, no signs of trouble for the approaching spacecraft.

Image: This image shows the results of the New Horizons team’s first search for potentially hazardous material around Pluto, conducted May 11-12, 2015, from a range of 76 million kilometers. The image combines 48 10-second exposures, taken with the spacecraft’s Long Range Reconnaissance Imager (LORRI), to offer the most sensitive view yet of the Pluto system. Credit: New Horizons / JHU/APL.

You would think New Horizons principal investigator Alan Stern would have enough on his plate just now, but Stern is also principal investigator for the Alice instrument at the Southwest Research Institute in Colorado. Alice has just made the news again in relation to its findings aboard the European Space Agency’s Rosetta spacecraft, which show that electrons near the surface of comet 67P/Churyumov-Gerasimenko cause the swift breakup of water and carbon dioxide there rather than photons from the Sun, which had been the prior explanation.

“The discovery we’re reporting is quite unexpected,” said Stern. “It shows us the value of going to comets to observe them up close, since this discovery simply could not have been made from Earth or Earth orbit with any existing or planned observatory. And, it is fundamentally transforming our knowledge of comets.”

Rosetta has been orbiting within about 160 kilometers of the comet since last August. What the Alice spectrograph does is to study the far-ultraviolet wavelength band in order to reveal the chemistry of the gases in the cometary coma. Much of the water and carbon dioxide being found in the coma comes from eruptions on the surface. Analysis of the Alice data shows that it is seeing water and carbon dioxide being broken up about one kilometer from the cometary nucleus by electrons produced by solar radiation. 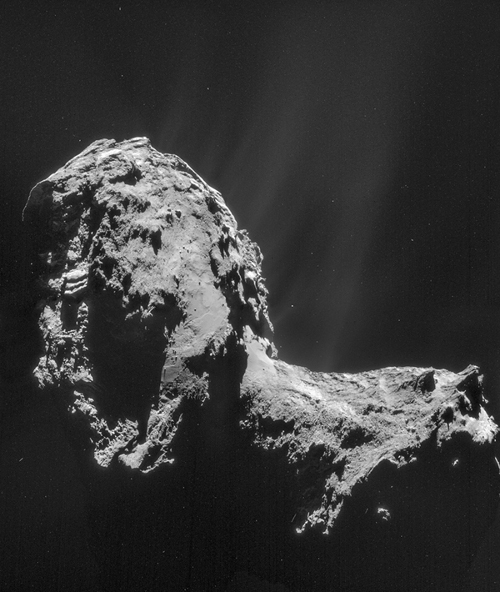 Image: This composite is a mosaic comprising four individual NAVCAM images taken 31 kilometers from the center of comet 67P/Churyumov-Gerasimenko on Nov. 20, 2014. The image resolution is 3 meters per pixel. Credit: ESA/Rosetta/NAVCAM.

And on to Ceres

The Dawn spacecraft sent the image below back to Earth on May 23, after which it moved toward its second mapping orbit, which it is scheduled to enter today. The spacecraft will spend the rest of June observing Ceres from roughly 2400 kilometers above the surface. What we see below is part of a sequence of images from 5100 kilometers, with resolution of about 480 meters per pixel. This image is part of OpNav9, the final set of Ceres imagery taken by Dawn for navigation purposes. Note the numerous secondary craters now visible, caused by the impact of debris from the larger impact sites. 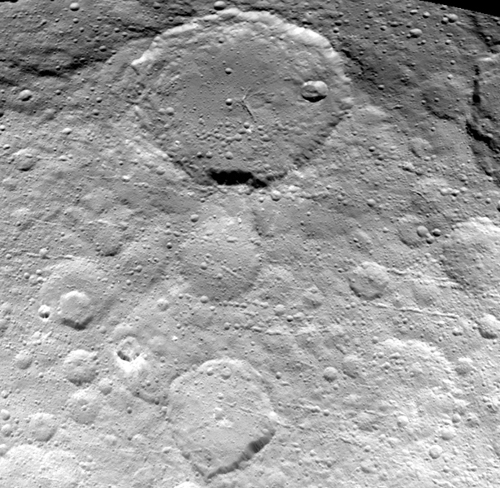 Cassini has been doing yeoman work for years now, but the image below shows its final close approach to Saturn’s moon Hyperion. Given the wide range in moons we’ve found at both Jupiter and Saturn, the discovery of the odd surface of Pluto’s moon Kerberos swims into context. When has a new encounter in deep space failed to offer up a few surprises? In the face of this, Hyperion’s odd, sponge-like appearance fits right in, an indication that the moon has an unusually low density and is porous, so that impactors compress the surface. 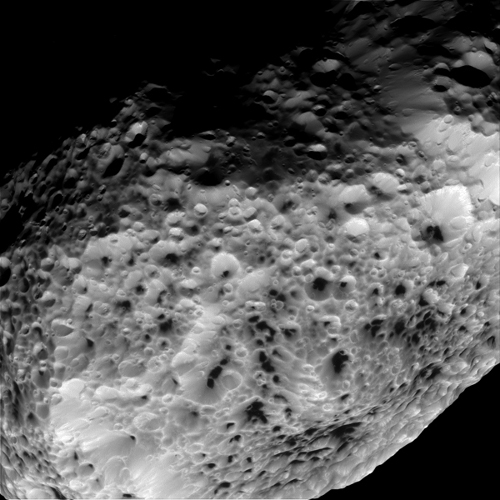 Image: Cassini’s view of Hyperion was acquired at a distance of approximately 38,000 kilometers from Hyperion and at a Sun-Hyperion-spacecraft, or phase, angle of 46 degrees. Image scale is 230 meters per pixel.

Cassini does have several more close flybys of Saturnian moons scheduled for 2015, but after that follows a departure of the planet’s equatorial plane as controllers prepare the craft for its final events. The ‘Grand Finale’ plunge, closing to within 4000 kilometers of Titan’s cloud tops, is part of this, as are maneuvers close enough to the F ring to do radar backscatter measurements for the first time. Cassini will ultimately burn up in Saturn’s atmosphere, and this seems like a good time to quote The Planetary Society’s Emily Lakdawalla on the matter:

When Cassini finally flies low enough to fall into Saturn’s atmosphere on September 15, 2017, it will be a day not to mourn it, but rather to celebrate its achievements. The day for mourning will come a month or few later, when Juno’s mission likewise comes to an end. On that day, for the first time since the 1970s, Earth will have no active missions exploring any of the giant planets. There won’t even be a mission on the way. The Voyagers and New Horizons will (hopefully) still be active way beyond Neptune, but Jupiter, Saturn, Uranus, and Neptune will only be visible through telescopes on Earth.

All of which makes the constellation of space achievements we’re celebrating this summer both dazzling and a bit poignant. At the very least, an exploration hiatus approaches.