After a nerve-wracking week in which contact was repeatedly lost and then regained, The Planetary Society’s LightSail has successfully charged its batteries and deployed its solar sail. Deployment began at 1947 UTC (1547 EDT) June 7, just off the coast of Baja California, with telemetry showing climbing motor counts and power levels consistent with ground testing. In a late afternoon update, Jason Davis also noted that the spacecraft’s cameras were on (see Deployment! LightSail Boom Motor Whirrs to Life).

If you’re following this mission closely, you’ll want to know about Ted Molczan’s page LightSail-A: Estimated Post-Sail Deployment Orbital Elements, with early predictions on
orbital decay with the sails extended. Bonnie Link (hflink.com) produced a map showing Monday’s LightSail passes over North America that you can see below. Here the white boxes are UTC times. The green arcs are sunlit, the blue in shadow and thus not visible. 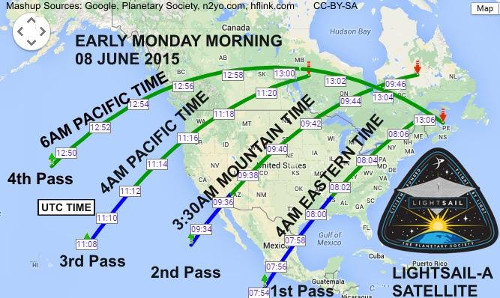 Further confirmation of sail deployment came in a tweet from Davis noting that early post-deployment telemetry showed the spacecraft’s tumble rate had slowed dramatically. So a tiny spacecraft the size of a shoebox paid for by private donors has apparently managed to achieve its primary goal despite early questions about the effectiveness of its solar arrays and battery and a series of communications breakdowns caused by software issues. We’ll learn more later today, with the first team teleconference scheduled for 1330 UTC.

Images of full sail deployment should become available at some point today and I’ll update this post then. LightSail is likely to remain in space no more than about three days, given the drag it’s already experiencing. Remember that this was expected, as the first LightSail mission wasn’t designed as a test of true solar sailing, but rather a way to shake out deployment issues (and plenty of them, obviously, turned up, especially with regard to attitude control).

Cees Bassa reported the first visual observations from Dwingeloo (NOTE: In The Netherlands, not Australia, as I previously wrote) post-deployment, noting the increase in the rate of orbital decay:

LightSail [40661/15025L] was with the video camera! At about 15 deg elevation it first was invisible, but then gave a long flare up to about 4th or 5th magnitude. It was running about 10s early on the last JSpOC elset, suggesting the sail has deployed, increasing the drag significantly. Congratulations to the Planetary Society!

A subsequent observation (via Ron Dantowitz, Clay Center Observatory) was of about 4th magnitude and stable in brightness. As Ted Molczan points out, you can go to the Heavens Above page, enter your location, and view a chart of visible passes of LightSail. Or check the LightSail viewing tips Jason Davis gives in the article referenced above. Flyovers around dawn and dusk are the best time to see a spacecraft still illuminated by sunlight.