Mission Updates Far and Near

The Planetary Society’s Emily Lakdawalla tells us (via Twitter) that she has a history with jigsaw puzzles, one that finally paid off in the image below. You’re looking at her work on a partially de-scrambled image from LightSail, fragmentary because the entire image was not downloaded during a Cal Poly (San Luis Obispo) overflight on the afternoon of the 8th. The complete image should be downloaded later today, and perhaps shown at an upcoming press conference with LightSail engineering team leaders scheduled for Wednesday June 10 at 1730 UTC (1330 EDT). 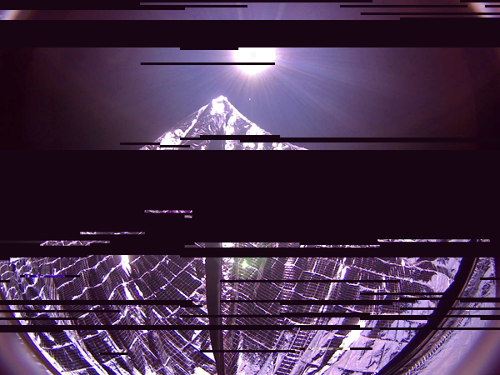 At any rate, LightSail’s deployed sails are in view. Bill Nye, CEO of The Planetary Society, was on National Public Radio yesterday (audio here) in a brief spot in which he described the unfurling of the solar sail as a ‘sail Mary pass,’ a longshot required by circumstance as the spacecraft continued to tumble. If the phrase ‘sail Mary pass’ is inscrutable to you, you may not be familiar with American football, where ‘hail Mary pass’ has become a routine way of describing desperate plays made under pressure (this exhausts my knowledge of football — I know only baseball — and I will send you to the Wikipedia for details). At any rate, sail deployment was the purpose of this first LightSail mission, and sail deployment we had [although I’m now hearing we have only ‘partial’ deployment – stay tuned].

Meanwhile, spectacular views from ongoing space missions continue to flow in. The next few weeks in particular are going to be rich in imagery as New Horizons closes on Pluto/Charon and Dawn continues its work at Ceres. The latest video animation from Ceres is something to enjoy more than once with a cup of coffee. If this doesn’t start your day right, what will?

Eighty images were combined to create the video, with the vertical dimension exaggerated by a factor of two. The views are from Dawn’s first mapping orbit at 13,600 kilometers and include later navigation images from 5100 kilometers, providing a detailed view of the terrain. I’m using the copy of the JPL video that io9 kindly posted to YouTube.

Dawn’s second mapping orbit began on June 3, with the rest of the month slated for observations about 4400 kilometers above the surface. Of the video, Dawn team member Ralf Jaumann (DLR, Berlin) says: “We used a three-dimensional terrain model that we had produced based on the images acquired so far. They will become increasingly detailed as the mission progresses — with each additional orbit bringing us closer to the surface.”

The Ma’at region at comet 67P/Churyumov-Gerasimenko’s ‘head’ clearly stays active even after it falls into shadow, as we can see from the latest imagery from the Rosetta spacecraft. Here we’re looking at jets of dust escaping into space, the result, researchers believe, of the increased heating of the comet as it moves closer to the Sun. Perihelion is coming up in mid-August, and this image was taken with a scant 270 million kilometers separating Sun and comet. “Only recently have we begun to observe dust jets persisting even after sunset”, says OSIRIS principal investigator Holger Sierks (Max Planck Institute for Solar System Research). 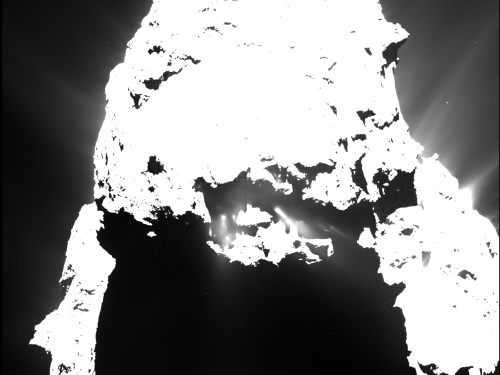 Image: This image of Rosetta’s comet taken on 25 April, 2015 from a distance of approximately 93 kilometers shows clearly distinguishable jets of dust after nightfall. Credit: ESA/Rosetta/MPS for OSIRIS Team MPS/UPD/LAM/IAA/SSO/INTA/UPM/DASP/IDA.

OSIRIS scientist Xian Shi (MPS) adds that although the dusty cometary surface cools rapidly after sunset, deeper layers of the comet — evidently containing frozen gases — retain their heat, a phenomenon that has also been observed on comet 81P/Wild 2 and Deep Impact comet 9P/Tempel 1. We’ll learn a good deal more about how comets awaken as Rosetta follows 67P/Churyumov-Gerasimenko into the summer in the long fall toward perihelion.