A question in a grad school astrobiology seminar at the University of Washington prompted Amit Misra to go to work on plate tectonics. The movement of huge blocks of a planetary surface is beneficial to life because it prompts recycling, as materials move back and forth between the inside of the planet and the atmosphere. We’ve learned a lot about plate tectonics on Earth, but the seminar question stuck with Misra. How could we detect plate tectonics on an exoplanet?

The result is a paper in press at Astriobiology. Misra and colleagues make the case that transient sulfate aerosols produced by volcanic outgassing could provide just the signature scientists need. Explosive volcanic events produced by subduction at the edges of tectonic plates inject such aerosols directly into the atmosphere, where they can persist over periods of months to years. The paper argues that future instruments like the James Webb Space Telescope or the European Extremely Large Telescope (E-ELT) will be able to detect eruptions via the atmospheric spectra of planets in transit across their star.

“I came up with the idea of looking at explosive volcanic eruptions as a proxy, or stand-in, for plate tectonics,” says Misra. “I had done some work modeling aerosols produced by volcanic eruptions for other projects, so I started looking into how we might detect an eruption and what it would tell us.” 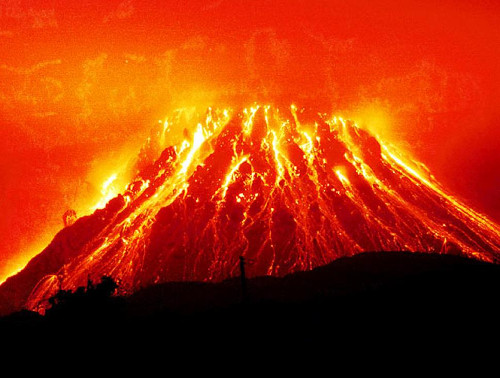 Image: Explosive volcanic activity on the edge of tectonic plates leaves a detectable signature in the atmosphere, one that may prove useful for characterizing conditions on an exoplanet. Credit: Kevin West/Liaison/Getty Images.

Geological activity is thought to be favorable for the emergence of life on planets in the habitable zone. Volcanic and hydrothermal activity during the Hadean and early Archaean eras, from the time of Earth’s formation to about 2.5 billion years ago, produced the energy necessary for early life and fostered the creation of organic carbon molecules. As for life’s survival, geological activity helps to stabilize long-term climates through the carbonate-silicate cycle, which continues to regulate the concentration of CO2 in Earth’s atmosphere.

So if we can detect explosive volcanism that is produced by tectonic action, we have another way to evaluate the potential habitability of terrestrial-class exoplanets. It’s true that we can also imagine habitats such as subsurface oceans on icy moons that persist without geological activity, but I think Misra has it right when he and his team note that for now, astrobiology focuses on biospheres at the largest scale, affecting the surface and atmosphere. These, after all, will be the first we will have the ability to detect and characterize.

The most readily detectable exoplanet biospheres will be large-biomass, high metabolism surface biospheres that persist for geologically significant timescales. This is because small biospheres or biospheres not in contact with the atmosphere will have minimal influence on atmospheric composition, and because short-lived biospheres are unlikely to temporally overlap with our observations… {W]e argue geological activity is necessary for the genesis and maintenance of these detectable biospheres. We propose that transient sulfate aerosols could be a spectral signature for volcanic activity and that the detection of transient sulfate aerosols would help inform habitability evaluations.

The researchers used transit transmission spectra with Earth as a model to test the detectability of transient sulfate aerosols in the stratosphere, with Earth-like assumptions for radius, mass and atmospheric composition. The models included Earth analogs around a Sun-like star as well as an M5 dwarf, in both cases assuming planets in the habitable zone. Aerosol data from Earth-observing satellites was used with different assumptions on cloud cover and altitudes.

The result: Evidence of volcanism is detectable using transit transmission spectra for planets within about 10 parsecs of the Sun. The trick will be to rule out false positives that could be the result of dust storms or impacts. And while transient sulfate aerosols are injected by explosive volcanism on Earth, occurring largely at converging plate boundaries, the paper notes the need for caution: “…even a tentative claim of plate tectonics would require a detection of transient sulfate aerosols coupled with other system/planetary observations and modeling.”

Detecting both transient aerosols and atmospheric oxygen together would be an even more interesting biosignature than a detection of oxygen by itself. The paper adds:

In the absence of surface fluxes of reduced gases, oxygen can potentially build up in an atmosphere even without the presence of life, making O2 alone an ambiguous biosignature. However the detection of volcanism would strongly suggest a source of oxygen-consuming reduced gases and would thus strengthen the case for biogenic oxygen.

The paper is Misra et al., “Transient Sulfate Aerosols as a Signature of Exoplanet Volcanism,”
in press at Astrobiology (preprint). A University of Washington news release is available.

Next post: Ceres Up Close (and a Bit of Bradbury)