Ceres Up Close (and a Bit of Bradbury)

I know I’m going to remember the summer of 2015 for a long time. The confluence of deep space missions has brought new images every week, including the latest view of Ceres and its enigmatic bright spots, which appears below. I’m already bracing myself for that Voyager-like sense of deflation once New Horizons gets past Pluto/Charon and the long-anticipated targets dwindle. Pluto has a special place for some of us because we grew up with it being considered the ninth planet. Dwarf planet or not, it’s the final act of a classic Solar System tour.

Not that we won’t be returning to many of these places, but the timing is uncertain and once Juno finishes its work at Jupiter, we’ll have no missions on their way to the outer planets. That makes this summer both energizing and a bit poignant, but let’s enjoy it while we can. This view of Ceres, taken on June 6, really is spectacular. We’re seeing the dwarf planet from 4400 kilometers as Dawn flies its second mapping orbit. The resolution is 410 meters per pixel. 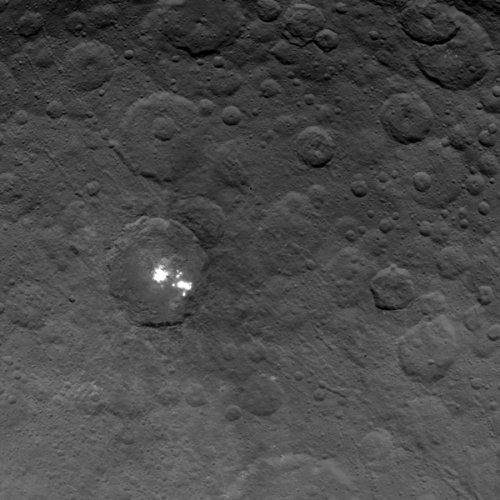 It’s the bright spots that continue to seize the imagination, as Chris Russell (UCLA), principal investigator for the Dawn mission, notes:

“The bright spots in this configuration make Ceres unique from anything we’ve seen before in the solar system. The science team is working to understand their source. Reflection from ice is the leading candidate in my mind, but the team continues to consider alternate possibilities, such as salt. With closer views from the new orbit and multiple view angles, we soon will be better able to determine the nature of this enigmatic phenomenon.”

The crater enclosing the brightest of the spots is about 90 kilometers across, and so far we have no clear explanation for where they appear or why they are as bright as they are. Like Vesta, Ceres reveals abundant cratering, but as this JPL news release makes clear, the latter shows a good deal more activity on the surface in the form of landslides and other flows. April’s color map, discussed at the 2015 General Assembly of the European Geosciences Union in Vienna, shows differences in color and terrain suggesting that Ceres was once an active body. 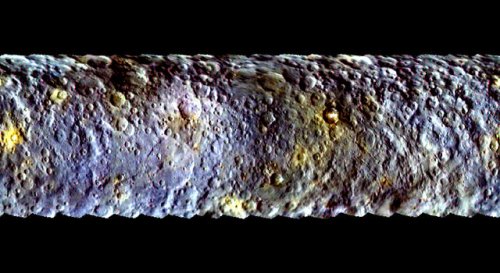 Image: This map-projected view of Ceres was created from images taken by NASA’s Dawn spacecraft during its initial approach to the dwarf planet, prior to being captured into orbit in March 2015. Credit: NASA/JPL-Caltech/UCLA/MPS/DLR/IDA.

The plan is for Dawn to continue in its 4400-kilometer orbit until June 28 before moving to 1450 kilometers, an altitude it will descend to in early August. The views, in other words, should continue to improve. Are we looking at an object that will one day become important to a system-wide infrastructure? John S. Lewis has suggested that Ceres could be a primary base for transport and operations in the asteroid belt, as well as a valuable stepping stone for the exploration of objects still further out, such as the icy moons of Jupiter and Saturn.

Working with Ken Roy and David Fields, Robert Kennedy has examined Ceres as a ‘shell world,’ one that could be ultimately transformed by being enclosed in a spherical shell of matter that could house an atmosphere and ecosystem. We’ve bandied the idea around extensively in the comments here ever since it was presented at the 2011 Tennessee Valley Interstellar Workshop session in Oak Ridge (see Terraforming: Enter the ‘Shell World’). The problems are formidable, but the authors note in a JBIS paper that a terraformed Ceres that is half ocean yields enough dry land to approximate the area of Indonesia, on a world with a gravity well only 1.5 percent that of Earth. Think of it as an enclosed micro-gravity tropic zone.

All of which, combined with this summer of deep space achievement, brings Ray Bradbury’s short story ‘Rocket Summer’ irresistibly to mind:

Rocket summer. People leaned from their dripping porches and watched the reddening sky.

The rocket lay on the launching field, blowing out pink clouds of fire and oven heat. The rocket stood in the cold winter morning, making summer with every breath of its mighty exhausts. The rocket made climates, and summer lay for a brief moment upon the land…

Such distant futures are fascinating in their own right and I applaud their exploration, but right now we’re in the midst of first-wave exploration by machine, and it’s clear that Ceres has many secrets yet to divulge, including the question of whether or not it has an internal ocean. Much rides on the outcome, but Ceres as refueling stop for Brian McConnell and Alex Tolley’s ‘spacecoach’ is an attractive proposition as we develop human missions to the outer planets.