In a summer already packed with interesting missions, we also have the unusual phenomenon of spacecraft ‘waking up’ after unexpected periods of dormancy. The European Space Agency’s Philae lander, which shut down on November 15, 2014 after operating on comet 67P/Churyumov-Gerasimenko for about sixty hours, came out of its hibernation on June 13. ESA reports more than 300 data packets have been received and are being analyzed. 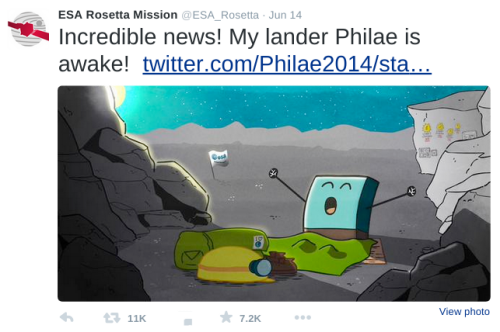 Image: Twitter lit up with news of Philae’s reappearance. Be sure to track @ESA_Rosetta to keep up with the latest.

This first contact since November lasted for 85 seconds, and according to reports from ESA, made it apparent that the lander had been retrieving data during the time of communications blackout. This ESA update notes that there are more than 8000 data packets in Philae’s memory that can be accessed (we hope) on the next contact, giving us information about the lander’s most recent activity as the comet and orbiting Rosetta continue toward perihelion.

DLR Philae project manager Stephan Ulamec adds this heartening note: “Philae is doing very well: It has an operating temperature of -35ºC and has 24 Watts available. The lander is ready for operations.” The lander and orbiting Rosetta have been at the comet for 313 days now, and just as with New Horizons, we have a countdown clock, this time showing 58 days to perihelion (New Horizons’ clock stands at 28 days, 23 hours, 57 minutes when last checked). 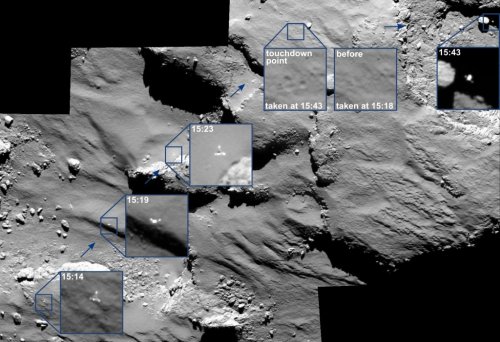 Image: The last moments of Philae’s descent, the imprint of its touchdown, and subsequent drift away from the Agilkia landing site was captured by Rosetta’s OSIRIS camera. All times in UT onboard spacecraft time. Credit: ESA/Rosetta/MPS for OSIRIS Team MPS/UPD/LAM/IAA/SSO/INTA/UPM/DASP/IDA.

Philae’s problems began when its harpoons did not deploy and the ice screws meant to secure it to the cometary surface proved ineffective on their own. The craft rebounded rather than landing at the Agilkia landing site and took two hours to come to rest at a site called Abydos. Along the way, the lander evidently struck a surface feature and tumbled, traveling more than a kilometer from its initial contact point. The rough terrain it wound up in is near a cliff and mostly in shadow.

Philae’s safe mode was triggered by lack of access to sunlight and apparent problems with the spacecraft’s orientation at the landing site. The theory had been that additional sunlight striking the solar panels by later this summer might reboot the lander. If we can continue to make contact with the craft, it will be an instance of rugged components surviving extreme temperatures (down to −160 °C). The lander’s battery is designed to recharge only when internal temperatures are above 0 °C, so we’ll just have to see what happens next.

What an opportunity Philae represents, riding on a comet as it heats during its approach toward the Sun, and of course the Rosetta orbiter remains healthy with its own view of cometary events. Meanwhile, this tweet from The Planetary Society’s Jason Davis announced the inevitable for a second mission that had experienced an ‘awakening’ during its flight. Atmospheric drag had, as expected, caught up with LightSail on Sunday.

As to that reawakening, LightSail suffered from software problems and needed a reboot of its own to get back into communication with ground controllers. Even after the event, communication problems continued, and the upcoming 2016 LightSail mission will also need to address the issues with attitude control that the first LightSail experienced. Nonetheless, this first go at a CubeSat solar sail succeeded at sail deployment and produced data that should make its successor a stronger craft. Here’s a June 8 view of LightSail from the Netherlands, a tough little spacecraft that got its job done despite huge problems along the way.