Astronomers at Penn State, NASA Ames, the University of Chicago and the SETI Institute are publishing news of an exoplanetary first: A planet smaller than Earth whose mass and size have both been measured. Kepler-138b is a Mars-sized world orbiting a red dwarf about 200 light years from Sol in the constellation Lyra. This is transit work, focusing on a system with two other transiting worlds, all three of which are too close to their parent star to make life a likely possibility.

If we look back at how far exoplanet research has come in the last fifteen years, it’s startling to realize that Kepler-138b, with a mass of about 6.7 percent that of the Earth, is 3000 times less massive than the first planet whose density was measured. That’s the word from Eric Ford (Penn State), a co-author on the study, which is being published today in Nature, and I assume he’s talking about HD 209458 b, whose size and density were first measured in 1999.

Previous work on the Kepler-138 system had measured the masses of the two outer planets, but the new work used additional Kepler data that not only allowed measurement of the small inner planet but tightened up mass measurements of the outer planets as well. Daniel Jontof-Hutter, a colleague of Ford’s at Penn State who led the study, comments on the methods used:

“Each time a planet transits the star, it blocks a small fraction of the star’s light, allowing us to measure the size of the planet. We also measured the gravity of all three planets, using data from NASA’s Kepler mission, by precisely observing the times of each transit. Each planet periodically slows down and accelerates ever so slightly from the gravity of its neighboring planets. This slight change in time between transits allowed us to measure the masses of the planets.”

Out of knowledge of both mass and size, exoplanet researchers can calculate the planet’s density. A low density planet is assumed to be primarily made of hydrogen and helium, while planets whose density is intermediate are thought to contain a high proportion of water. High density worlds are likely to have the same rocky composition as the Earth itself. 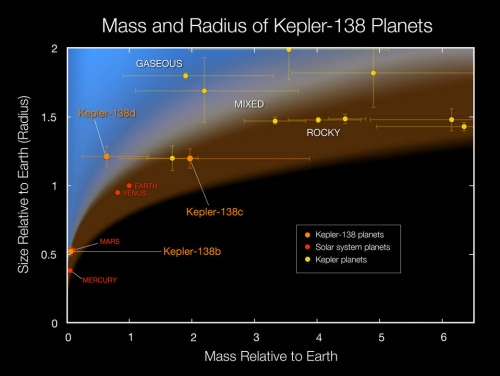 Image: This plot shows the masses and sizes of the smallest exoplanets for which both quantities have been measured. The solar system planets (shown in red) are for comparison. The three Kepler-138 planets (shown in orange) are among the four smallest exoplanets with both size and mass measurements. Kepler-138b is the first exoplanet smaller than Earth to have both its mass and size measured. This significantly extends the range of planets with measured densities. Credit: NASA Ames/W Stenzel.

Given its mass and size, Kepler-138b is probably a rocky world, but further observations will be needed to confirm this. The two outer planets in this system, Kepler-138c and Kepler-138d, are both approximately the size of the Earth, as this NASA Ames news release notes. The researchers believe Kepler-138c, whose density is similar to Earth, is rocky, while Kepler-138d, although roughly the same size, is less than half as dense, implying the presence of a greater proportion of low-density constituents like water and hydrogen.

“The substantial difference between the densities of the two larger planets tells us that not all planets similar to Earth in size are rocky,” said Jack Lissauer, co-author and planetary scientist at NASA’s Ames Research Center in Moffett Field, Calif. “Further study of small planets will help provide more understanding of the diversity that exists in nature, and will help determine if rocky planets like Earth are common or rare.”

Image: This animation shows the mass-radius diagram based on measurements of 127 exoplanets. The video begins by showing planets with masses similar to Jupiter and slowly zooms towards small masses and radii planets to display a comparison of the physical properties of the Kepler-138 planets relative to Earth, Venus, Mars and Mercury. The planet Kepler-138b is the first exoplanet smaller than the Earth to have both its mass and its size measured, and is one of three planets that orbit the star Kepler-138, and pass in front of it, or transit, every orbit. Each time a planet transits the star, it blocks a small fraction of the star’s light, allowing astronomers to measure the size of the planet. All three planets were identified by NASA’s Kepler mission that has discovered over a thousand planets around other stars. Credits: Jason Rowe, NASA Ames/SETI Institute.