It’s hard to consider a place with surface temperatures of –180°C ‘Earthlike,’ but there are reasons why we see the term so often applied to Titan. The most striking of these is the presence of surface lakes and seas, a phenomenon found nowhere else in the Solar System. The temperatures are cold enough to make the circulating fluid liquid methane and ethane rather than water, but we see things in Cassini imagery that are strikingly familiar, including seas fed by river-like channels and large numbers of shallow lakes that appear in flatter areas.

The European Space Agency’s Thomas Cornet has been leading a team investigating Titan’s surface features in greater detail. In particular, the lakes of Titan do not appear to be fed by rivers, making it likely that they are filled either by rainfall or by liquids welling up from below. Empty depressions can be found where lakes may once have been, and it is believed that some of the lakes dry out during Titan’s thirty-year cycle of seasons. Cornet and team wanted to learn how the depressions in which the lakes are found formed in the first place.

Image: A radar image of Titan’s north polar regions (centre), with close ups of numerous lakes (left) and a large sea (right). The sea, Ligeia Mare, measures roughly 420 x 350 km and is the second largest known body of liquid hydrocarbons on Titan. Its shorelines extend for some 2000 km and many rivers can be seen draining into the sea. By contrast, the numerous lakes are typically less than 100 km across and have more rounded shapes with steep sides. The radar images were created using data collected by the international Cassini spacecraft. Credit: NASA/JPL-Caltech/ASI/USGS; left and right: NASA/ESA. Acknowledgement: T. Cornet, ESA.

Here again we find a terrestrial analog for Titan, the ‘karstic’ landforms seen on Earth when rocks like limestone and gypsum erode because of the effects of rainfall and groundwater. Erosion depends on many factors, temperature, rainfall and chemistry among them, but what develops over time are sinkholes and caves in areas where there is abundant moisture, and salt-pans where conditions are more arid. The ESA team studied how long it would take for areas on Titan to go through similar processes, adjusting for the differences in terrain.

Rather than water, Cornet and colleagues assumed liquid hydrocarbons as the primary dissolving agent, while modeling a surface replete with solid organic material. Given what we know about Titan’s climate, the result was a period of 50 million years to create a 100-meter deep depression at Titan’s rainy high polar latitudes, where we see so many lakes. The team believes this time scale is compatible with what appears to be a relatively youthful surface.

Cornet describes the work and its results:

“We compared the erosion rates of organics in liquid hydrocarbons on Titan with those of carbonate and evaporite minerals in liquid water on Earth. We found that the dissolution process occurs on Titan some 30 times slower than on Earth due to the longer length of Titan’s year and the fact it only rains during Titan summer. Nevertheless, we believe that dissolution is a major cause of landscape evolution on Titan, and could be the origin of its lakes.” 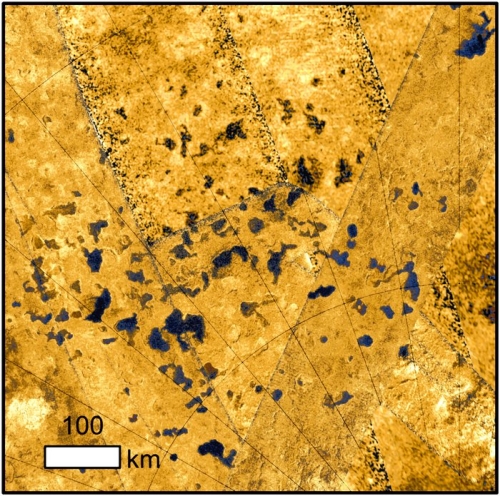 Those arid regions at lower latitudes, as you might expect, take much longer to develop the same kind of depressions, up to 375 million years according to the team’s modeling. Here again the time scale is consistent with the observed scarcity of depressions in these regions of the moon. Thus the comparison with Earth remains surprisingly useful, although the processes at work continue under entirely different climate and chemical conditions.

An atmospheric phenomenon on Titan is likewise replicated in its own way on our own world. Seven years of data from the Cassini probe have helped a team at University College London reach conclusions about the so-called ‘polar wind’ on Titan that is driving gas from its atmosphere. Data from the Cassini Plasma Spectrometer (CAPS) show that about seven tons of hydrocarbons and nitriles are being lost into space every day.

The question the study answers is why this is happening. Titan’s atmosphere is primarily nitrogen and methane. Nitriles are molecules with tight nitrogen/carbon bonds. Andrew Coats (UCL), who led the investigation of the polar wind, explains their interactions:

“Although Titan is ten times further from the Sun than Earth is, its upper atmosphere is still bathed in light. When the light hits molecules in Titan’s ionosphere, it ejects negatively charged electrons out of the hydrocarbon and nitrile molecules, leaving a positively charged particle behind. These electrons, known as photoelectrons, have a very specific energy of 24.1 electron volts, which means they can be traced by the CAPS instrument, and easily distinguished from other electrons, as they propagate through the surrounding magnetic field.”

A major difference between Titan and Earth is that the former has no magnetic field. It is, however, surrounded by Saturn’s rotating magnetic field, which forms a comet-like tail around the moon. The CAPS instrument, in 23 flybys in which Cassini moved through Titan’s ionosphere or its magnetic tail, detected photoelectrons up to 6.8 Titan radii out, showing how efficiently they move along magnetic field lines. What Coates and team have done is to show how the negatively charged photoelectrons create an electrical field that continues to pull hydrocarbon and nitrile particles out of the atmosphere wherever it is lit by the Sun. 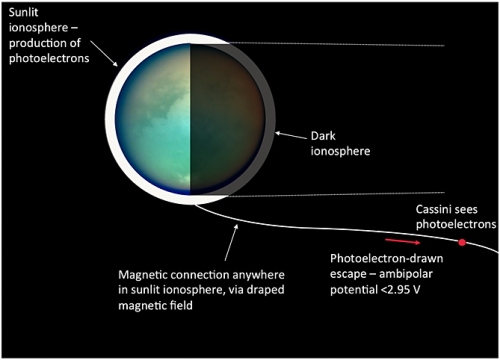 Image: Schematic illustration of the magnetic connection between the sunlit ionosphere (left) and Cassini in the tail. Credit: UCL/Andrew Coates.

The same phenomenon occurs on Earth but only in the polar regions, where the magnetic field is open. Titan is not similarly constrained, which is why we see much more widespread effects. As the paper notes: “…we have presented new observations of the photoelectron spectra in Titan’s sunlit ionosphere and in the tail. The results again confirm a magnetic connection between the sunlit ionosphere and tail, along the draped magnetic field lines.”

In both cases, we generate a polar wind, and similar processes may exist on Mars and Venus, making Titan, if not ‘Earthlike,’ a world with intriguing similarities to terrestrial-class planets.

The Coates paper is “A New Upper Limit to the Field-Aligned Potential Near Titan,” published in Geophysical Research Letters 18 June 2015 (abstract). The Cornet paper on Titan’s surface is “Dissolution on Titan and on Earth: Towards the age of Titan’s karstic landscapes,” accepted for publication in Journal of Geophysical Research – Planets.

Next post: Yarkovsky and YORP Effect Propulsion for Long-life Starprobes