With New Horizons scheduled for its flyby of Pluto/Charon in a matter of weeks and a Kuiper Belt extended mission to follow, it’s interesting to note a new paper on objects well beyond Pluto’s orbit. Lucie Jílková (Leiden Observatory) and colleagues address the problem of Sedna and recently discovered 2012VP113. The problem they present is that even at their closest approach to the Sun, these two objects are outside the Kuiper Belt, while their aphelion distances are too short for them to be considered members of the Oort Cloud.

So where do Sedna and 2012VP113 belong in our taxonomy of the Solar System? Thirteen such objects have now been discovered, a group collectively referred to as Sednitos. These objects have orbital elements in common: A large semi-major axis (with perihelion beyond 30 AU and aphelion beyond 150 AU), a common orbital inclination, and a similar argument of perihelion. A common origin seems likely. Jílková’s team is interested in the possibility that Sedna and its ilk were captured from the outer disk of a passing star, an event that would have happened in the Solar System’s infancy in its natal star cluster.

Digression: Have a look at the diagram below to clarify the orbital elements that explain the orientation of an orbit around a star. Here the orbital inclination is shown by (i) — you can see that the orbital plane differs by an appreciable angle from the plane of the ecliptic. The so-called ascending node is (Ω), showing the orbiting object passing from one side of the reference plane to the other. The argument of perihelion — the angle between the ascending node and the perihelion — is shown at (ω). The image comes from Swinburne University of Technology, whose pages on orbital parameters offer an excellent overview. They form part of COSMOS, The SAO Encyclopedia of Astronomy, an online resource I frequently consult. 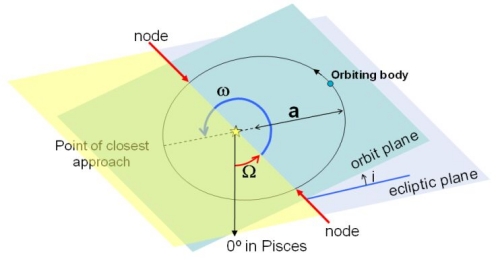 To make their case, the researchers simulated over 10,000 stellar encounters to constrain the parameters of the disrupting star. In each calculation, up to 20,000 ‘particles’ in the planetesimal disk were simulated, the calculations being run until at least 13 objects with perihelion of 30 AU and aphelion of 80 AU were captured by the Sun. The distributions thus generated were compared with the known population of Sednitos, a limited dataset but one that yields rough numbers for the mass of a flyby star, its distance at closest approach and its velocity.

We wind up with a star 1.8 times the Sun’s mass that would have passed by the Sun at roughly 340 AU at an inclination (relative to the ecliptic) of 17–34 degrees and a velocity in the range of 4.3 kilometers per second. During this encounter, the Kuiper Belt would have been disrupted, with many ice dwarfs being captured by the passing star, while others would have been pushed into the inner Oort Cloud. A large number would have been flung into the interstellar depths. The researchers estimate that the inner Oort would have acquired on the order of 440 planetesimals in the encounter, while over 900 should populate the Sednitos region.

Jílková and team believe that the orbital parameters for the Sednitos population fit the capture scenario (“Such clustering is a general characteristic of an exchanged population.”) The paper thus explains the orbital properties of Sedna and its ilk, while also contesting the theory that a distant, thus far unobserved planet is responsible for the Sednitos’ orbits. Such a planet would have been disrupted by the stellar encounter, although the researchers do not rule out the possibility that a planet that now affects their orbit could have been captured after the transfer of the Sednitos. 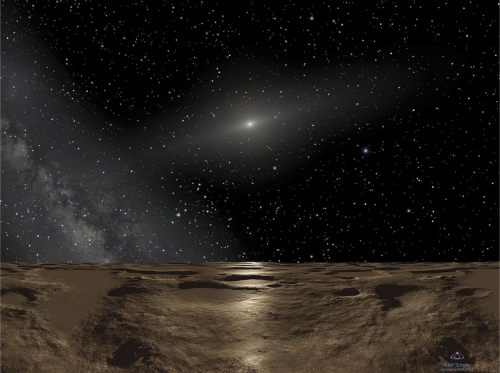 Image: This is an artist’s impression of noontime on Sedna, the farthest known planetoid from the Sun. Over 8 billion miles away, the Sun is reduced to a brilliant pinpoint of light that is 100 times brighter than the full Moon. (The Sun would actually be the angular size of Saturn as seen from Earth, way too small to be resolved with the human eye.) The dim spindle-shaped glow of dust around the Sun defines the ecliptic plane of the solar system where the major planets dwell. To the left, the hazy plane of our Galaxy, the Milky Way, stretches into the sky. The background constellations are Virgo and Libra. Credit: NASA, ESA and Adolf Schaller.

Do we have any prospect of finding the disruptive star? From the paper:

Understanding the origin of Sednitos and testing the theories for an outer planetary-mass object requires additional observations. The Gaia astrometric mission is expected to discover ∼ 50 objects in the outer Solar System. Being a solar sibling…, the encountering star may be also discovered in the coming years in the Gaia catalogues. Having been formed in the same molecular cloud, one naively expects that the chemical composition of this star is similar to that of the Sun…

It’s an interesting thought, though the paper speculates that by now, the culprit star has probably turned into a white dwarf, an outcome that happens within two billion years for a star in the 1.8 Solar mass range. The fate of the planetesimals the passing star presumably stole from Sol’s system is probably to wander without a host, free-floating objects cast loose after the parent star blew through its red giant phase. If the paper is right, objects like Sedna could one day become the first targets from another star we ever reach with our spacecraft.

The paper is Jílková et al., “How Sedna and family were captured in a close encounter with a solar sibling,” submitted to Monthly Notices of the Royal Astronomical Society (preprint).