A Disruptive Pathway for Planet Formation

Planet formation can be tricky business. Consider that our current models for core accretion show dust grains embedded in a protoplanetary disk around a young star. Mixing with rotating gas, the dust undergoes inevitable collisions, gradually bulking up to pebble size, then larger. As the scale increases, we move through to planetesimals, bodies of at least one kilometer in size, which are large enough to attract each other gravitationally. Some planetesimals break apart through subsequent collisions, but a few grow into protoplanets, then planets themselves.

It’s a reasonable theory that fits what we see around young stars as solar systems take hold. But what Alan Boss (Carnegie Institution for Science) has been working on is a question raised by the process: How do the dust grains and objects smaller than planetesimals keep from being drawn into the protostar before they can become large enough to attract the materials they need to grow? The pressure gradient of the gas in the disk should make smaller objects — particularly those between 1 and 10 meters in radius — spiral inward to inevitable destruction.

By modeling the interactions between protoplanetary disks and their stars, however, Boss has come up with a proposed solution. Stars like the Sun can undergo explosive bursts of a century or so in duration, accompanied by an increase in the luminosity of the star. An explosive phase like this, which Boss’s paper argues can be linked to a period of gravitational instability in the disk, can scatter objects in the 1 to 10-meter range outward from the infant star. 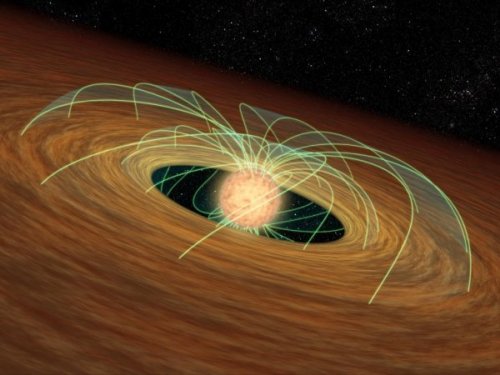 The paper refers to the disruptions of the disk under scrutiny as ‘marginally gravitationally unstable phases of evolution’ (MGU), but they’re more widely known as ‘FU Orionis events.’ The star FU Orionis is a pre-main sequence star showing just this range of fluctuation in magnitude. It has given its name to the entire class, with other examples being V1057 Cyg and V1647 Orionis. We’re apparently seeing mass from an accretion disk falling into the young star, creating a high-luminosity phase that can persist for lengthy periods.

It has been suggested that eruptions like these can occur from 10 to 20 times as a young star matures. The event is, in any case, striking when it occurs. When V1057 Cyg was first observed undergoing this behavior in 1970, it increased in brightness by 5.5 magnitudes (going from 17th magnitude to 12th) over a multi-year interval. But we have a lot to learn. No FU Orionis star has yet been seen shutting down from its high-luminosity phase. Mike Simonsen provides an excellent background discussion of FU Orionis stars in The Furor over FUORs.

Boss modeled protoplanetary disks undergoing FU Orionis events for disks at 1 to 10 AU containing a wide variety of solid particle sizes subject to gas drag and gravitational forces. Backing up this model of gravitational interaction, recent work has shown that young stars can form spiral arms in their disks like those thought to be involved in the disruptive events Boss has studied. The gravitational forces produced by these spiral arms may be the key to scattering boulder-sized bodies so that they can survive gas drag and grow into planetesimals.

Larger bodies, then, have a chance to survive. Boss’ models showed that over time scales of ~6 X 103 years or longer, about half the gaseous disk mass was accreted onto the protostar, but during this same period, few objects between 1 and 10 meters were lost through inward migration. A much greater fraction of particles between 1 and 10 centimeters were lost to the protostar during the same period, but even here, a significant fraction survive.

“This work,” Boss adds, “shows that boulder-sized particles could, indeed, be scattered around the disk by the formation of spiral arms and then avoid getting dragged into the protostar at the center of the developing system. Once these bodies are in the disk’s outer regions, they are safe and able to grow into planetesimals. While not every developing protostar may experience this kind of short-term gravitational disruption phase, it is looking increasingly likely that they may be much more important for the early phases of terrestrial planet formation than we thought.”