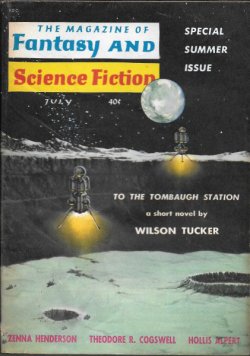 As I write, we’re thirteen and a half days out from the Pluto/Charon encounter. New Horizons will make its closest approach to Pluto at 0749 EDT (1149 UTC) on July 14. All of which has had me reading Pluto-related science fiction that I missed along the way, including most recently Wilson Tucker’s “To the Tombaugh Station.” The story, which ran in the July, 1960 issue of Fantasy and Science Fiction, is a murder investigation that includes a journey to the station of the title, which had been established to investigate a ‘Planet X’ still further out in the system. Isaac Asimov has an essay on Pluto in this issue as well.

Image: The cover of the July, 1960 Fantasy and Science Fiction shows a generic moon landing scene by artist Mel Hunter. But if you look at it with our post-1978 (discovery of Charon) eyes, it could be seen as an imaginative take on a Pluto landing, with the Earth on the horizon being replaced by Charon. Given the prominence of “To the Tombaugh Station” on the cover, I found myself doing a double-take.

As to the real Pluto, we now learn that the infrared spectrometer on New Horizons has detected frozen methane on the surface, a compound first observed on the dwarf planet as early as 1976. What New Horizons will bring to the table is the chance to study differences in methane ice from one part of the surface to another. According to this NASA news release, Dale Cruikshank (NASA Ames, and a member of the New Horizons team) led the team of ground-based astronomers that made the original methane detection. 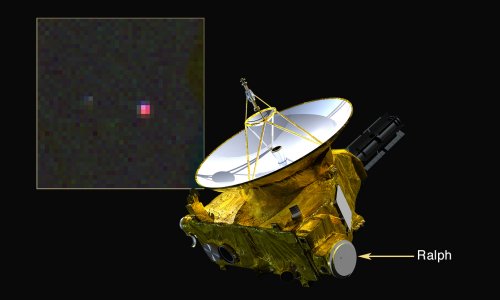 I hope you’re taking advantage of the fact that the raw images from New Horizons are being made available on the JHU/APL website. There you can see images from the spacecraft’s Long Range Reconnaissance Imager (LORRI) displayed without special processing. They’re posted within about 48 hours after coming in to the New Horizons Science Operations Center.

And below is the latest time-lapse movie, this one showing changes in the apparent size of Pluto and Charon as the spacecraft moves from 56 million kilometers to 22 million kilometers. The images involved in this time-lapse approach movie were taken between May 28 and June 25. Pluto continues to show a surface marked by a bright northern hemisphere, with darker material in a discontinuous band along the equator. It’s exciting to see differences emerging on Charon as well, along with the previously noted dark polar region.

The short video below is an annotated version of the above in which Pluto’s prime meridian (the region of the planet that faces Charon) is shown in yellow and the equator is shown in pink.

New Horizons’ Alice ultraviolet imaging spectrograph performed a test observation of the Sun on June 16 (this from a distance of 5 billion kilometers) to use in the interpretation of atmospheric observations to be taken on July 14. On that day, not long after the Pluto flyby, the spacecraft will study sunlight as it passes through Pluto’s atmosphere. New Horizons scientist Randy Gladstone (SwRI) puts it well: “It will be as if Pluto were illuminated from behind by a trillion-watt light bulb.” That backlight will tell us much about the atmosphere’s composition.

A thruster burn beginning at 1101 EDT (1501 UTC) on June 29, stopping 23 seconds later, was used to make the smallest of the nine course corrections since the spacecraft’s launch in 2006. New Horizons changed velocity by 27 centimeters per second, making a slight adjustment to its arrival time and position at close approach and flyby. The difference upon arrival: The craft would have reached close approach 20 seconds late without the burn, and 184 kilometers off-target.

“This maneuver was perfectly performed by the spacecraft and its operations team,” added mission principal investigator Alan Stern, of Southwest Research Institute, Boulder, Colorado. “Now we’re set to fly right down the middle of the optimal approach corridor.”