End of an Era in Planetary Exploration?

While both Alan Stern and Glen Fountain admitted to having anxious moments over the weekend when New Horizons went silent, it became clear at yesterday’s news conference that those moments were short and quickly subsumed with ongoing duties. Stern is principal investigator for New Horizons, and the man most closely identified with making the mission a reality, while Fountain is project manager for New Horizons at JHU/APL in Maryland. It was Stern who pointed out that the spacecraft has been in safe mode a number of times already.

Nine times, as a matter of fact, since launch, although as of yesterday we are back in the realm of normal operations. So the circumstances were not unfamiliar even if this safe mode came so close to destination that it raised inevitable concern and a flutter of worry on Twitter. Stern said he was in the control center six or seven minutes after getting the call that something was wrong. It also turns out that this was the first safe mode occurrence in which the backup computer was involved. So what exactly happened? Here’s Fountain’s explanation:

On the third of July we were preparing for the main event, with encounter mode starting on the 7th. That means loading those commands that are sequenced to get observations from the 7th of July to encounter and on through July 16th. This is a single command load that was to be put on the primary as well as the backup computer.

We had already loaded to the backup and on the 4th were loading to the primary computer, while at the same time taking data we had not been able to get down to the ground and compressing it, to free up the rest of the recorder for all the other data. So we were doing multiple things on the processor at the same time, and as we were doing the compression, the computer couldn’t handle the load. The processor said it was overloaded. The spacecraft then switched to the backup computer and went into safe mode, exactly as it should have.

Thus a timing conflict in the spacecraft command sequence is the culprit. Stern said that the data loss was minimal, with all science operations for Sunday and Monday lost as well as part of Saturday. Altogether, New Horizons lost 30 observations out of a total of 496 scheduled to be made between July 4 and the end of the close approach (the last of these occurring two days after the flyby). Because the team weighs the value of observations according to how close to the planet they are made, these lost sessions aren’t critical, and Stern figures the mission has experienced zero impact in terms of its highest priority science.

“We wish this hadn’t occurred,” Stern added,” but as PI, I can tell you that this is a speed bump in terms of the total return we expect from this flyby. We’re looking forward now to getting back to data collection. Pluto and Charon are already surprising us with their surface appearance.”

Science observations resume today at 1234 EDT (1634 UTC). Meanwhile, we have images captured by the Long Range Reconnaissance Imager (LORRI) between July 1 and 3, which were released immediately after the news conference. 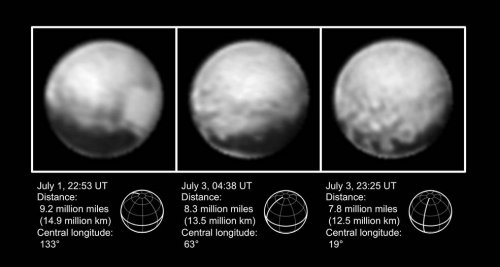 Image: The left image shows, on the right side of the disk, a large bright area on the hemisphere of Pluto that will be seen in close-up by New Horizons on July 14. The three images together show the full extent of a continuous swath of dark terrain that wraps around much of Pluto’s equatorial region. The western end of the swath (right image) breaks up into a series of striking dark regularly-spaced spots, each hundreds of miles in size, which were first detected in New Horizons images taken in late June. Intriguing details are beginning to emerge in the bright material north of the dark region, in particular a series of bright and dark patches that are conspicuous just below the center of the disk in the right image. In all three black-and-white views, the apparent jagged bottom edge of Pluto is the result of image processing. The inset shows Pluto’s orientation, illustrating its north pole, equator, and central meridian running from pole to pole. Credit: NASA/JHUAPL/SWRI.

The image below adds color to the July 3 LORRI image using data gathered by the Ralph instrument, which performs visible and infrared imaging and spectroscopy. 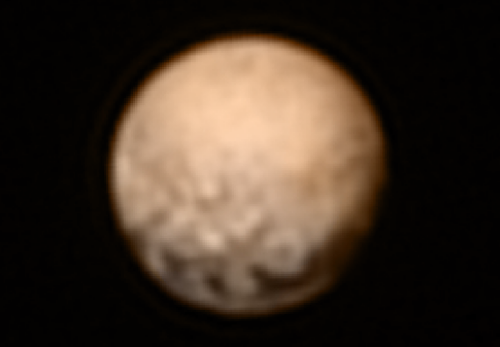 Be sure to read Dennis Overbye’s fine essay in the New York Times on what New Horizons’ flyby of Pluto means in the larger scheme of planetary exploration (you also get the benefit of a video Overbye produced). I owe a lot to Dennis Overbye, whose Lonely Hearts of the Cosmos (HarperCollins, 1991) reignited my long-standing ambition to move from technology writing into astronomy and astrophysics. In the Times essay, he sees New Horizons as the beginning of the end of at least one phase of human exploration.

Beyond the hills are always more hills, and beyond the worlds are more worlds. So New Horizons will go on, if all goes well, to pass by one or more of the cosmic icebergs of the Kuiper belt, where leftovers from the dawn of the solar system have been preserved in a deep freeze extending five billion miles from the sun…

But the inventory of major planets — whether you count Pluto as one of those or not — is about to be done. None of us alive today will see a new planet up close for the first time again. In some sense, this is, as Alan Stern, the leader of the New Horizons mission, says, “the last picture show.”

We are at the edge of a vast sea, as Overbye notes, the one that separates us from the stars. Innumerable explorations await us as we learn more about the Solar System and push outward into the Kuiper Belt. But what a poignant moment as we realize that of the nine ‘classical’ planets (let’s not argue about ‘dwarf’ planets for now), there will never be another moment when one swims into focus for the first time. Let’s cherish the week ahead, and hope that one day humans will experience a similar kind of moment with a new planet in a new solar system.