Detection of Pebbles in a Circumstellar Disk

Not long ago we looked at a new paper from Alan Boss that modeled interactions in young protoplanetary disks (A Disruptive Pathway for Planet Formation). The idea here is that as dust grains and larger objects bump into each other on the way to forming planetesimals, a mechanism must exist to keep them from spiraling into their star. Boss’ models show explosive phases in young stars that lead to gravitational instabilities of the sort needed to scatter these small objects outward and preserve their prospects for forming into planetesimals, and perhaps one day, planets.

Watching infant solar systems form is akin to studying embryology in animal species, a chance to understand the myriad interactions that affect growth and set it in particular directions. Now we have work out of the University of St. Andrews, recently presented at the National Astronomy Meeting in Llandudno, Wales, that announces the discovery of a ring of small rocks circling the star DG Tauri, a 2.5 million year old object some 450 light years from Earth. 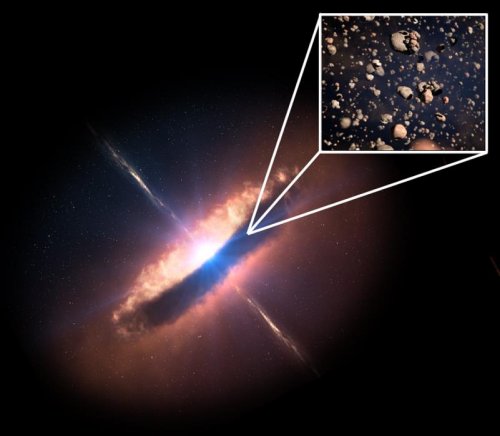 Image: An artist’s impression of the belt of ‘pebbles’ in orbit around the star DG Tauri. The inset is a close up view of a section of the belt. Credit: J. Ilee. Adapted from original work by ESO/L. Calçada/M. Kornmesser, ALMA (ESO/NAOJ/NRAO)/L. Calçada (ESO).

The work of Jane Greaves and Anita Richards (University of Manchester) is based on data from the e-MERLIN array of radio telescopes centered in Jodrell Bank (Cheshire) and extending over southern England to form an interferometer, giving it the resolution of a single large telescope. The instrumentation proved up to the considerable challenge, as Greaves relates:

“The extraordinarily fine detail we can see with the e-MERLIN telescopes was the key to this discovery. We could zoom into a region as small as the orbit of Jupiter would be in the Solar System. We found a belt of pebbles strung along a very similar orbit – just where they are needed if a planet is to grow in the next few million years. Although we thought this was how planets must get started, it’s very exciting to actually see the process in action!”

The observations, as this Royal Astronomical Society news release explains, were made at a wavelength of about 4.6 cm. They revealed a signature that requires chunks of rock at least a centimeter in size. This is a useful finding, for as we’ve seen in the work of Alan Boss, we’re in the process of tuning up our computer models of protoplanetary disks and their interactions. Now we can identify, at least in some systems, the location of pebble-like material that will one day accrete into larger objects. A deeper analysis of young disks should emerge from all this. 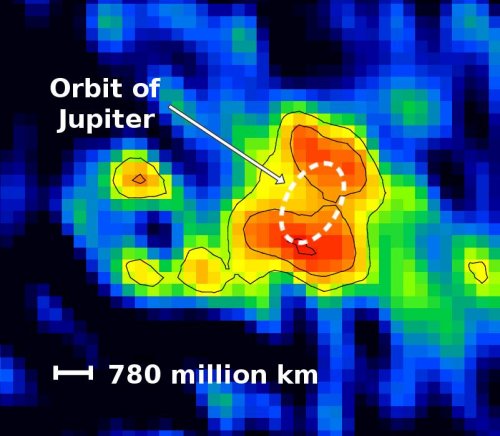 Image: An e-MERLIN map of the star DG Tauri. The yellow and red areas show what is thought to be a ring of pebble-sized clumps in orbit around the star. Credit: J. Greaves / A. Richards / JCBA.

Studying the results will be, among others, a group called the Planet Earth Building Blocks Legacy e-MERLIN Survey (known by its fitting acronym — PEBBLeS). The team plans to extend studies like this to a number of stars that are in the process of forming their own solar systems. Right now we’re using equipment sensitive to regions as small as Jupiter’s orbit, but the logical goal is to move in five times closer to witness the formation of planets like our own. The researchers believe that upgrades to e-MERLIN and the coming capabilities of the Square Kilometer Array will make such observations possible.