New Horizons makes its closest approach to Pluto, at approximately 12,500 kilometers above the surface, at 0749 EDT (1149 UTC) on Tuesday July 14. Be aware that for much of that day, we’ll be out of communication with the spacecraft while it’s busy gathering data. About 2102 EDT (0102 UTC on the 15th), we should receive a confirmation of a successful flyby — the spacecraft is scheduled to send a preprogrammed signal that it has survived the close approach. Then the data flow begins and will continue for months.

NASA offers the schedule for the flyby here, with information on NASA TV coverage. We should be looking at close-up images of Pluto and hearing early reactions from the science team by mid-afternoon of Wednesday the 15th. And of course it will be possible to follow the mission on Facebook or on Twitter (also #PlutoFlyby). The nail-biting time will be the wait on the 14th for the signal announcing a successful transit of the system. It doesn’t take a large object to silence a spacecraft moving at 14 kilometers per second and we can only hope for the best. 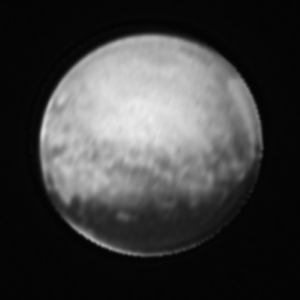 Meanwhile, the imagery keeps improving, with both Pluto and Charon beginning to swim out of the image-processing mist. We’re seeing bright and dark features on Pluto’s surface, while Charon presents a more uniform light gray terrain with a large dark polar region. This NASA news release speculates on the possibility of impact craters on Charon, quoting Jeff Moore (NASA Ames): “If we see impact craters on Charon, it will help us see what’s hidden beneath the surface. Large craters can excavate material from several miles down and reveal the composition of the interior.”

Image: Pluto from the New Horizons’ Long Range Reconnaissance Imager (LORRI), July 8, 2015. Most of the bright features around Pluto’s edge are a result of image processing, but the bright sliver below the dark “whale,” which is also visible in unprocessed images, is real. 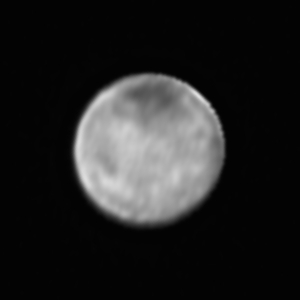 The differences between Pluto and Charon are increasingly apparent, with Charon lacking the reddish color of the former, a hue that has reminded some of us of early, blurry photos of Mars. While frozen ices like nitrogen, carbon dioxide and methane have been detected on Pluto, Charon’s surface seems to be mostly frozen water and ammonia compounds. Unlike Pluto, Charon has no atmosphere, and its interior is composed of rock and ice in equal measures, whereas Pluto’s interior is predominantly rock. The lower surface contrast of Charon has been abundantly clear as New Horizons returns images of the two dissimilar worlds.

As New Horizons nears its closest approach, the Cassini orbiter will take images of Pluto/Charon from its distant station around Saturn, and beginning July 23, the Spitzer Space Telescope will take seven days of observations at infrared wavelengths. The plan is to study ices on Pluto’s surface. New Horizons will also be backed up by Kepler observations, with the K2 mission focusing on Pluto for a three month period beginning in October.

“K2 observations will expand the time coverage of the speedy New Horizons flyby of Pluto, making observations of the dwarf planet-moon system every 30 minutes,” said Steve Howell, project scientist for Kepler/K2 at NASA’s Ames Research Center in Moffett Field, California. “We are excited to turn the planet-hunting Kepler spacecraft’s attention to this distant solar system object to provide additional scientific insight into this far-off, mysterious world, itself a miniature solar system of five moons in orbit about Pluto.” 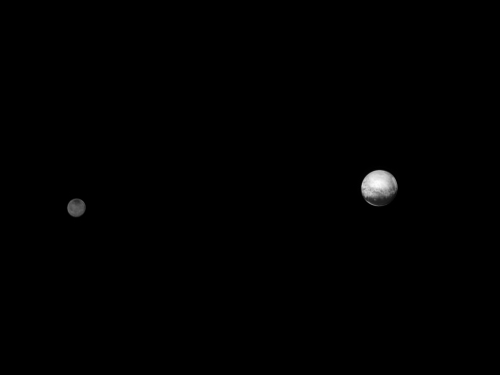 And we’ve already had one interesting study performed by the SOFIA airborne observatory, an infrared telescope mounted on a 747 aircraft. On June 28, Pluto occulted a distant star, creating a backlighting that could be studied to provide a baseline measurement of Pluto’s atmosphere. All of this, plus the data that the Hubble Space Telescope has gathered about Pluto’s smaller moons, will provide datasets that complement the abundant science return of New Horizons. 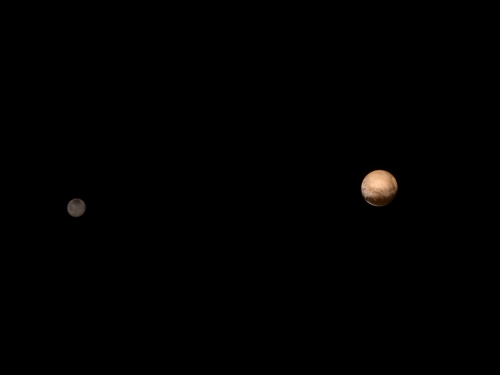 Image: This is the same image of Pluto and Charon from July 8, 2015; color information obtained earlier in the mission from the Ralph instrument has been added. Credit: NASA/Johns Hopkins University Applied Physics Laboratory/Southwest Research Institute.

Previous post: Detection of Pebbles in a Circumstellar Disk