Last Look at Pluto’s ‘Far Side’

The side of Pluto that always faces its large moon Charon is the side that New Horizons won’t see when it makes its close flyby on July 14. That makes the image below what principal investigator Alan Stern is calling “the last, best look that anyone will have of Pluto’s far side for decades to come.” 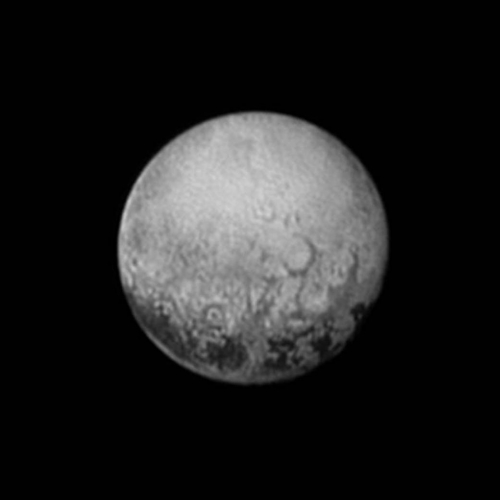 Four dark spots seem to be connected to the dark belt in Pluto’s equatorial region, their fairly regular spacing a source of considerable curiosity. The large areas are estimated to be roughly 480 kilometers across, with irregular boundaries between light and dark terrain. Jeff Moore (NASA Ames) gives a glimpse of what’s ahead:

“When we combine images like this of the far side with composition and color data the spacecraft has already acquired but not yet sent to Earth, we expect to be able to read the history of this face of Pluto.”

And of course, as this JHU/APL news release reminds us, we’ll soon be seeing the encounter hemisphere from as close as 12,500 kilometers.