We’re under the 24 hour mark for the Pluto flyby. NASA will offer a news briefing for New Horizons (check NASA TV), covering mission status and what to expect during flyby, at 1030 EDT (1430 UTC) today, a schedule change that moves the time up by half an hour. On Tuesday morning, the agency will present a live program called Arrival at Pluto Countdown starting at 0730 (1130 UTC). Remember that closest approach to Pluto is scheduled to occur at approximately 0749 (1149 UTC) on Tuesday, when the spacecraft comes within 12,500 kilometers of the surface. Gathering data, the spacecraft will be out of communication for much of that day. 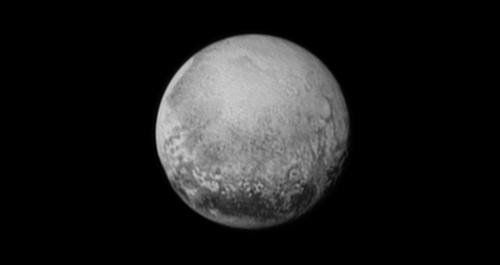 You can check NASA’s television coverage and media activities here, but I’ll also send you to Emily Lakdawalla’s page at The Planetary Society, where the indefatigable reporter has gathered in one place everything known about the schedule and other sources of information. Lakdawalla also offers a list of all the planned downlinks of image data during close approach. It’s interesting to see that Pluto will appear larger than the LORRI (Long-Range Reconnaissance Imager) field of view for less than 24 hours during the close approach. 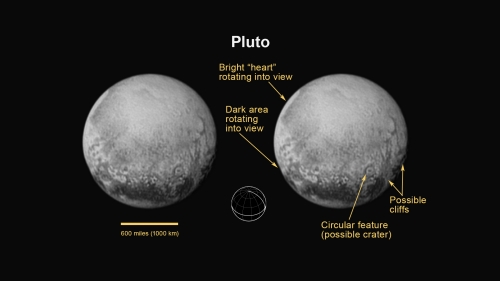 Image: On July 11, 2015, New Horizons captured a world that is growing more fascinating by the day. For the first time on Pluto, this view reveals linear features that may be cliffs, as well as a circular feature that could be an impact crater. Rotating into view is the bright heart-shaped feature that will be seen in more detail during New Horizons’ closest approach on July 14. The annotated version includes a diagram indicating Pluto’s north pole, equator, and central meridian. Credit: NASA/JHUAPL/SWRI

What we’ll all be waiting for with no little degree of tension is the downlink scheduled for the night of July 14, which will demonstrate that after its period of intense data-taking, New Horizons has survived the encounter and will be able to transmit stored data back to Earth. Assuming that all goes well, NASA has scheduled release of close-up images for the media briefing at 1500 (1900 UTC) on July 15.

Here is what happens next, as described by Emily Lakdawalla:

Following closest approach, on Wednesday and Thursday, July 15 and 16, there will be a series of “First Look” downlinks containing a sampling of key science data. Another batch of data will arrive in the “Early High Priority” downlinks over the subsequent weekend, July 17-20. Then there will be a hiatus of 8 weeks before New Horizons turns to systematically downlinking all its data. Almost all image data returned during the week around closest approach will be lossily compressed — they will show JPEG compression artifacts. Only the optical navigation images are losslessly compressed.

Data transmission takes quite a while, with the entire dataset (lossily compressed) being downlinked starting in mid-September and continuing over a ten week period. In November, the spacecraft will downlink the entire science data set compressed without loss, a process that will take a year to complete. We’ll be keeping up with New Horizons for a long time, and here’s hoping that will include a KBO encounter and an upload of the One Earth Message.

And let’s not forget Comet 67P/Churyumov–Gerasimenko, which for over a year now has been under study by the European Space Agency’s Rosetta spacecraft. We’re now one month away from perihelion for the comet, the point at which the comet is closest to the Sun in its orbit, and therefore likely to show the greatest amount of surface activity. When Rosetta reached the comet, both were 540 million kilometers from the Sun. That distance has now closed to 195 million kilometers, and will reach 186 million km by the 13th of August. 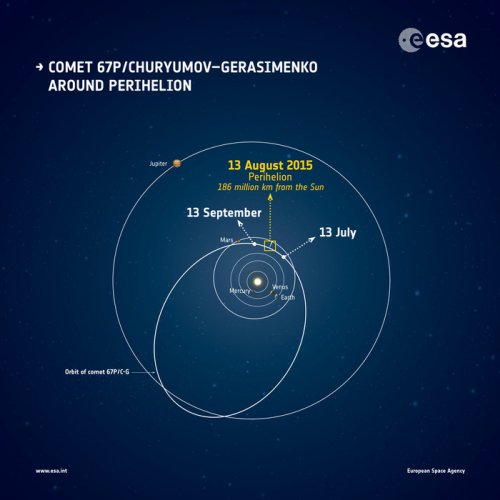 Image: The orbit of Comet 67P/Churyumov–Gerasimenko and its approximate location around perihelion, the closest the comet gets to the Sun. The positions of the planets are correct for 13 August 2015. Credit: ESA.

“Perihelion is an important milestone in any comet’s calendar, and even more so for the Rosetta mission because this will be the first time a spacecraft has been following a comet from close quarters as it moves through this phase of its journey around the Solar System,” notes Matt Taylor, ESA’s Rosetta project scientist.

“We’re looking forward to reaching perihelion, after which we’ll be continuing to monitor how the comet’s nucleus, activity and plasma environment changes in the year after, as part of our long-term studies.”

This ESA news release has more about Rosetta’s progress. Post-Pluto/Charon, we have a summer full of fascinating science ahead with Rosetta and, of course, Dawn’s continuing work at Ceres. But first let’s get New Horizons through that flyby.