I’m on the road and don’t have a lot of time for writing, but I want to go ahead and get these new Pluto images up. They’re now available on the NASA site, and were introduced at the news conference at JHU/APL that just concluded. I’ll also quote just a bit of the news release for each photo. 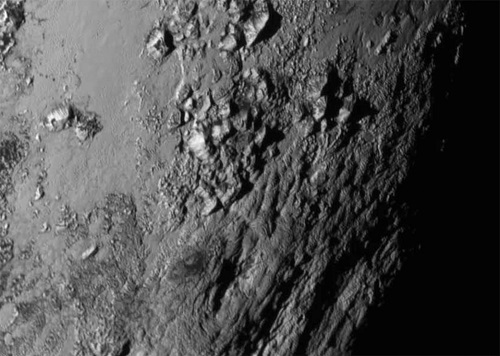 New close-up images of a region near Pluto’s equator reveal a giant surprise: a range of youthful mountains rising as high as 11,000 feet (3,500 meters) above the surface of the icy body.

The mountains likely formed no more than 100 million years ago — mere youngsters relative to the 4.56-billion-year age of the solar system — and may still be in the process of building, says Jeff Moore of New Horizons’ Geology, Geophysics and Imaging Team (GGI). That suggests the close-up region, which covers less than one percent of Pluto’s surface, may still be geologically active today.

This one I mis-typed in my Twitter coverage for those who were following it, but the correct number is 100 million years. Young mountains, and check that altitude! The lack of cratering implies a young surface, but we can rule out tidal effects as a driver for geology here. “This may cause us to rethink what powers geological activity on many other icy worlds,” says GGI deputy team leader John Spencer of the Southwest Research Institute in Boulder, Colo. 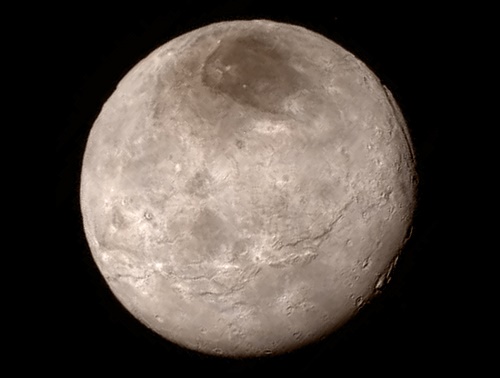 A swath of cliffs and troughs stretches about 600 miles (1,000 kilometers) from left to right, suggesting widespread fracturing of Charon’s crust, likely a result of internal processes. At upper right, along the moon’s curving edge, is a canyon estimated to be 4 to 6 miles (7 to 9 kilometers) deep.

Again, a relatively young surface shaped by geological activity. And note the diffuse boundary at the dark region at the north pole, suggesting we’re looking at a thin film of material. “Underlying it is a distinct, sharply bounded, angular feature; higher resolution images still to come are expected to shed more light on this enigmatic region.” 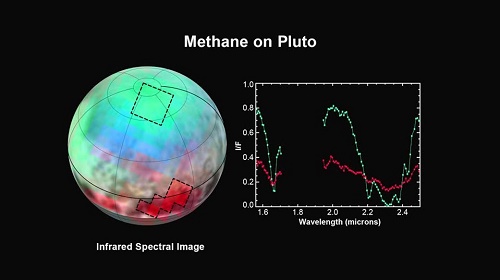 The latest spectra from New Horizons Ralph instrument reveal an abundance of methane ice, but with striking differences from place to place across the frozen surface of Pluto.

“We just learned that in the north polar cap, methane ice is diluted in a thick, transparent slab of nitrogen ice resulting in strong absorption of infrared light,” said New Horizons co-investigator Will Grundy, Lowell Observatory, Flagstaff, Arizona. In one of the visually dark equatorial patches, the methane ice has shallower infrared absorptions indicative of a very different texture. “The spectrum appears as if the ice is less diluted in nitrogen,” Grundy speculated “or that it has a different texture in that area.”

We have so much data to come in the next sixteen months, and given the surprises we’ve already been dealt, it’s clear we’ll be talking about Pluto/Charon for some time. As one of the participants in the press briefing yesterday said, we’re not just re-writing the books now. We’re going to be writing entirely new books.