Exoplanet hunter Greg Laughlin (UC-Santa Cruz), who could make a living as a poet (if it were possible to make a living as a poet) wrote recently of his hope for a Pluto image “ that will become a touchstone, a visual shorthand for distance, isolation, frigidity and exile.” We haven’t seen that one yet, but I suspect we will with one of the images we’re still to receive showing New Horizons’ view of a receding crescent Pluto again being folded into the deep.

Last night’s reacquisition of the New Horizons’ signal sets us up for many weeks of data return, and provides a triumphant exclamation point on the flyby. Our spacecraft punched right through the orbital plane of Pluto’s system and emerged unscathed. The joy and festivity apparent on those actually at JHU/APL and the wild and celebratory conversations on social media bring home how popular this diminutive spacecraft has become. What an accomplishment, and even now I’m wondering what advances in technology could do in an outer system follow-up.

But I also found myself thinking of that portion of Clyde Tombaugh’s ashes that are now further from us than Pluto. Recently I mentioned Michael Byers’ fine novel Percival’s Planet (Henry Holt, 2010), which contains a fictional account of the discovery of Pluto, seen through the eyes of Byers’ protagonist, an astronomer named Alan Barber, who works with the same equipment Tombaugh uses. Weaving fictional characters in with historical personages like Tombaugh, Vesto Slipher and Percival Lowell, Byers re-creates the era and the task. Here he’s talking about the ‘blink comparator’ methods employed in the hunt for ‘Planet X’: 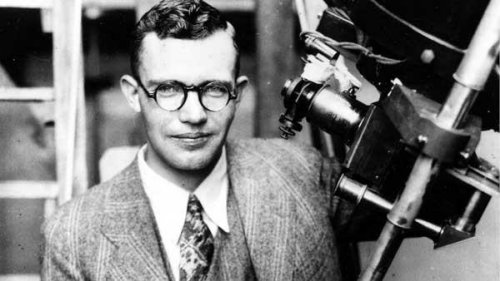 It is dreadful work, the blinking. You have two exposures of the same area of sky — long exposures a week apart or so; then the two exposed plates, ten inches square, are placed side by side in the big new Bosch, all brass fittings and an urgent smell of electricity and heated gas. Looking through an eyepiece you can see a very small portion of one of these plates — an area roughly the size of a nickel, showing about two hundred stars. Then you hit a switch and the comparator will show you the identical area of the other plate. And if you have managed against all odds to expose your two plates identically — if you’ve got the differential right, and the timing, and moreover if the weather hasn’t been hazy one night and clear the next, and if the telescope hasn’t slipped or jarred or just been slightly misaimed for some reason, and then if you’ve managed in the basement darkroom to develop both plates the same way — well, then you will see the same two hundred stars, looking the same way, appear again in the eyepiece as the blinker shows you the second plate.

The trick is to find a ‘star’ that vanishes or brightens or does something odd between one plate and another. You might be looking at a Cepheid variable, or you might find the track of an asteroid, or if you really get lucky, maybe you’ll find Planet X. Credit Clyde Tombaugh with a magnificent persistence. You can see from the discovery plates just how tricky this work was. 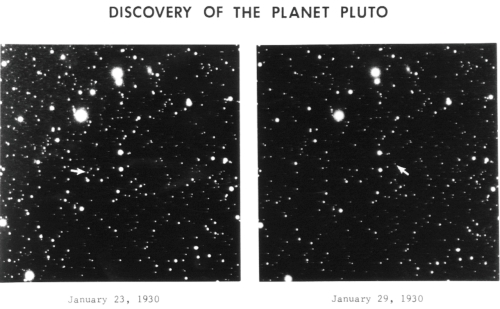 Next Steps in the Outer System

It was fifty years ago yesterday that Mariner 4 reached Mars, a fitting time to think about how far we have come and where we might go next. In What About the Next Pluto Mission?, Centauri Dreams regular Andrew LePage tackles the question of Pluto follow-ups, noting that given how infrequently we have low-energy launch opportunities, and considering the flight times necessary to reach Pluto, we should start thinking about an encore right now. We have a launch opportunity at the end of 2028 and the beginning of 2029 that LePage finds attractive. But there are other options depending on trajectory that he’s careful to analyze.

A follow-on mission, even a flyby, would benefit from advances in technology, remote sensing and miniaturization, allowing for more data to be collected, but LePage also speculates on the possibility of a design that would allow us to multiply our observing chances:

Depending on the available payload margin and, just as importantly, the new mission’s budget, it may prove possible to carry several lightweight but very capable sub-probes, with masses perhaps on the order of tens of kilograms, that the main spacecraft could deploy weeks or months before its 2039 Pluto encounter. These lightweight sub-probes could be directed to make observations of Pluto, Charon, or its other moons at closer range or under different viewing conditions than might be possible with the main spacecraft. This tactic would add flexibility to mission planning as well as the quantity and quality of the scientific data returned. While a traditional entry probe would be of little use in the thin atmosphere of Pluto (which has an estimated surface pressure on the order of a few microbars), a properly equipped sub-probe could be aimed to fly hundreds or maybe even tens of kilometers above Pluto’s surface to directly sample its atmosphere and any aerosol or cloud layers that may exist.

Moreover, there are various ‘energetically favorable’ launch windows in the early 2030s that could get flyby spacecraft to Uranus or Neptune, a follow-up to the grand work of the Voyagers. LePage suggests three separate missions to be launched toward Pluto, Uranus and Neptune in the 2028-2034 timeframe. Dedicated orbiters are, of course, the best choice for maximizing data return, but fast flybys give us the chance to get to the outer system again before any orbiters we choose to send arrive, which presumably wouldn’t be any earlier than mid-century.

The Allure of Sedna

Meanwhile, in At Pluto, the End of a Beginning, Lee Billings makes the case for renewed study of the outer system with his usual elegance. Even before we see the images and data we will be receiving over the next 16 months, we can take heart from the remarkable number of interesting features we’ve found:

Pluto bears a bright polar cap of methane and nitrogen ice, and mottled regions at its equator that signal strange and complex geology. Charon, by contrast, harbors a mysteriously dark polar region apparently bereft of bright ice, and an impact-generated chasm deeper and longer than Earth’s own Grand Canyon. More and better images will soon stream down from New Horizons’ far-distant memory banks, no doubt filled with even greater wonders – perhaps signs of ice volcanoes, or of ancient frozen seas, or of things so strange and unexpected they cannot yet be imagined. The only thing unimaginable is that they will contain nothing tantalizing enough to someday call us back.

All the questions seem to be multiplying. Why is Eris more massive than Pluto, a question that resonates even as we debate whether or not Pluto may not in fact be a bit larger? Surely there are major differences in composition, but why did these occur? And on beyond Eris there remains the king of outer system puzzles. Sedna’s orbit, which goes out thirty times as far as Neptune’s at aphelion, seems to imply gravitational nudges from something else. Is there, Billings asks, a planet as large as several Earth masses waiting to be discovered? And we can add, is Sedna itself a capture from a primordial stellar flyby, an object from another star? 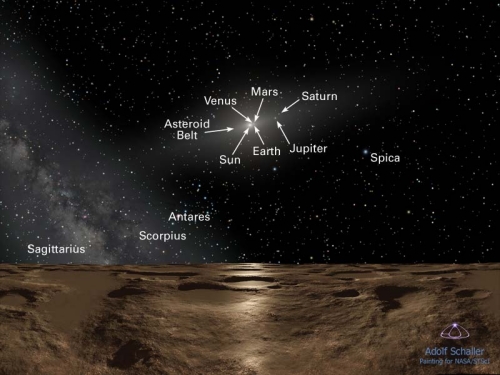 Image: An artist’s impression of the view from Sedna, with points of interest labeled. Credit: Adolf Schaller/NASA.

The questions abound, and we’ll start to tackle at least of few of them when New Horizons goes on to visit a Kuiper Belt Object, assuming an extended mission is approved (it’s hard to see it being rejected at this point). And closer in, we have only fragmentary looks at major satellite systems like those of Uranus and Neptune. Billings and LePage are pointing to what we need to be thinking about as we plan the next steps beyond New Horizons, a process that, given the length of time it takes to develop a mission and a spacecraft, we should have already begun.