The latest view of Charon shows us a 390-kilometer strip of Pluto’s largest moon with a unique feature, clearly visible below. We are looking at what Jeff Moore (leader of the New Horizons Geology, Geophysics and Imaging team, calls “a large mountain sitting in a moat.” Moore is the first to admit that the scenario has geologists stumped. 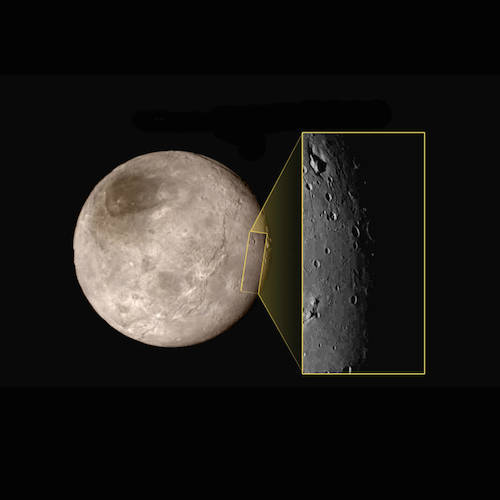 Image: This new image of an area on Pluto’s largest moon Charon has a captivating feature — a depression with a peak in the middle, shown here in the upper left corner of the inset. The image shows an area approximately 390 kilometers from top to bottom, including few visible craters. Credit: NASA-JHUAPL-SwRI.

This view of Charon was taken at approximately 0630 EDT (1030 UTC) on July 14, 2015, about 1.5 hours before closest approach to Pluto, at a range of 79,000 kilometers. Again, notice the lack of craters here, reinforcing what we’re learning about Charon’s relatively young surface. I know we were all curious about Charon from the outset, but I don’t know anyone who thought we would be talking about geologically young features on either of these worlds. We have sharper versions coming — this image is heavily compressed, but the Long Range Reconnaissance Imager (LORRI) on New Horizons will be returning richer data.