I’ve come to dislike the term ‘Earth 2.0.’ It’s not so much the idea of a second Earth as the use of 2.0, which in our technological era invariably recalls software updates. Windows 2.0 was better than Windows 1.0, but Windows 3.0 was the one that really took off — the idea here is that progressive iterations improve the product. I’d rather see us use ‘Earth 2’ than ‘Earth 2.0,’ for the latter implies a new and improved Earth, and I’m not sure just what that would be. Speculating about that is, I suppose, a key activity of philosophers.

But Earth 2.0 has stuck as a way of designating a planet much like our own. Here too we have to be careful. A planet with liquid water on at least parts of its surface might exist around a red dwarf, packed into a tidally-locked orbit and divided between a frigid night side and a day side with, perhaps, only a few zones where life might flourish. It’s not Earth 2.0 because it has a star that never moves in its sky and its susceptibility to solar flares offers evolutionary challenges much different from those life has experienced around our G-class Sun.

So we can reserve Earth 2.0 for planets that orbit around their star in roughly the same way we do, meaning a star much like the Sun and a planet of Earth size in a more or less circular orbit at about 1 AU. To really hammer home the comparison, we should ask for a star of a certain age. We might find a planet meeting all these characteristics circling a star so young that life is unlikely to have taken hold, assuming that life takes the same kind of path it did on Earth (obviously, nothing more than an assumption). But the Earth 2.0 that seizes the popular imagination will so closely mirror our own in age, orbit, and size as to suggest a living world. 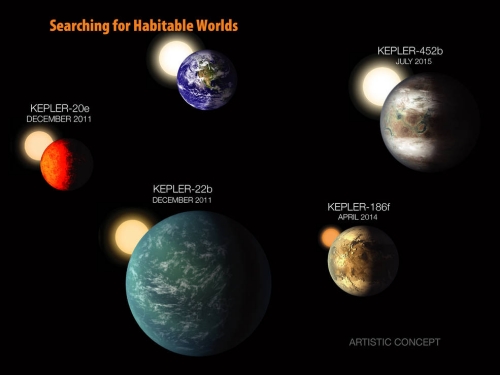 Image: The sweep of NASA Kepler mission’s search for small, habitable planets in the last six years. The first planet smaller than Earth, Kepler-20e, was discovered in December 2011 orbiting a Sun-like star slightly cooler and smaller than our sun every six days. But it is scorching hot and unable to maintain an atmosphere or a liquid water ocean. Kepler-22b was announced in the same month, as the first planet in the habitable zone of a sun-like star, but is more than twice the size of Earth and therefore unlikely to have a solid surface. Kepler-186f was discovered in April 2014 and is the first Earth-size planet found in the habitable zone of a small, cool M dwarf about half the size and mass of our sun. Kepler-452b is the first near-Earth-Size planet in the habitable zone of a star very similar to the sun. Credit: NASA Ames/W. Stenzel.

The beauty of the Kepler mission is that it just keeps on giving. The Kepler team has already identified over 4,000 planet candidates, and now we have a new catalog of more than 500. All planets are subjects of interest in their own right, but life-bearing ones still have considerable cachet, as witness Jeffrey Coughlin (SETI Institute), who comments thus:

“This catalog contains our first analysis of all Kepler data, as well as an automated assessment of these results. Improved analysis will allow astronomers to better determine the number of small, cool planets that are the best candidates for hosting life.”

Twelve planet candidates in the new catalog are less than twice Earth’s diameter and orbit in the habitable zone of their star, meaning that region where liquid water can exist on the surface. Among these, Kepler-452b, about 1400 light years from us, has now been confirmed as a planet, and it’s an interesting world, one that orbits a star much like the Sun, being about 5 percent more massive and 10 percent brighter. The planet itself is about 5 times the mass of the Earth, with a radius 50 to 60 percent larger. Moreover, Kepler-452b orbits only 5 percent farther from its parent star than Earth orbits the Sun, with a 385-day year. Jon Jenkins (NASA Ames) is lead author on the paper on this work. He pointed out at the NASA news briefing today that gravity on this world would be about 50 percent larger than that of Earth, on a world with a thicker atmosphere and a larger degree of cloud cover. The star is also older than our Sun, which has predictable consequences:

“Kepler-452b receives 10 percent more energy than the Earth. Bear in mind that stars in their youth are smaller and dimmer, but they get brighter with age. Kepler-452’s star is more than 6 billion years old, and should leave its habitable zone at about the 9 or 10 billion year mark. Earth will receive the same energy as Kepler-452 does today in about one and a half billion years.” 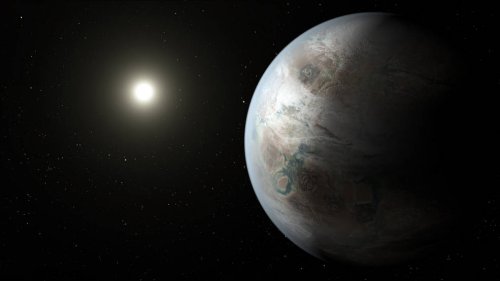 Image: This artist’s concept depicts one possible appearance of the planet Kepler-452b, the first near-Earth-size world to be found in the habitable zone of star that is similar to our sun. The habitable zone is a region around a star where temperatures are right for water — an essential ingredient for life as we know it — to pool on the surface. Scientists do not know if Kepler-452b can support life or not. What is known about the planet is that it is about 60 percent larger than Earth, placing it in a class of planets dubbed “super-Earths.” While its mass and composition are not yet determined, previous research suggests that planets the size of Kepler-452b have a better than even chance of being rocky. Kepler-452b orbits its star every 385 days. The planet’s star is about 1,400 light-years away in the constellation Cygnus. It is a G2-type star like our sun, with nearly the same temperature and mass. This star is 6 billion years old, 1.5 billion years older than our sun. As stars age, they grow in size and give out more energy, warming up their planets over time. Credits: NASA Ames/JPL-Caltech/T. Pyle

This is a planet that has been in its star’s habitable zone for longer than the age of the Earth, ample time, as Jenkins noted, for life to begin. Although the size of the world — intermediate between Earth and Neptune — makes it too large to be a true Earth analogue, Jenkins believes that it has a “better than even chance of being rocky.” Thus we could be looking at a world that models changes our planet will be making in the remote future.

We’ll get more habitable zone planets out of the Kepler data, according to Jeff Coughlin (SETI Institute), because we’re getting much better in our planet extraction techniques, but Coughlin noted at the news conference that for every planet we’ve detected, there are at least fifty we cannot see because they are not oriented so as to make transits possible. “Earth-like planets,” Coughlin said, “are common throughout the galaxy.” 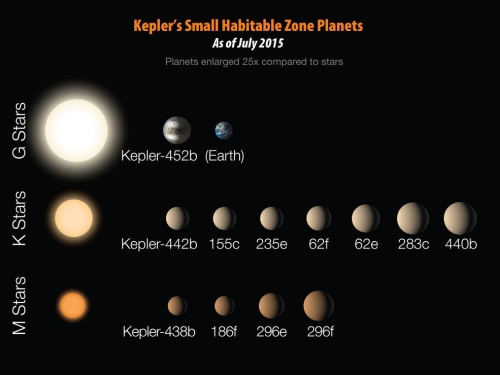 Image: Twelve Exoplanet discoveries from Kepler that are less than twice the size of Earth and reside in the habitable zone of their host star. The sizes of the exoplanets are represented by the size of each sphere. These are arranged by size from left to right, and by the type of star they orbit, from the M stars that are significantly cooler and smaller than the sun, to the K stars that are somewhat cooler and smaller than the sun, to the G stars that include the sun. The sizes of the planets are enlarged by 25X compared to the stars. The Earth is shown for reference. Credits: NASA/JPL-CalTech/R. Hurt

Earth 2.0? Not if we’re dealing with a super-Earth. But what an interesting world Kepler-452b seems to be. We have the example of planets like Kepler-438b and Kepler-442b to remind us of worlds that might be rocky like the Earth, but orbiting different kinds of stars, in this case red dwarfs. No Earth 2.0 among that lot either, but it’s clear we’re moving in the right direction. 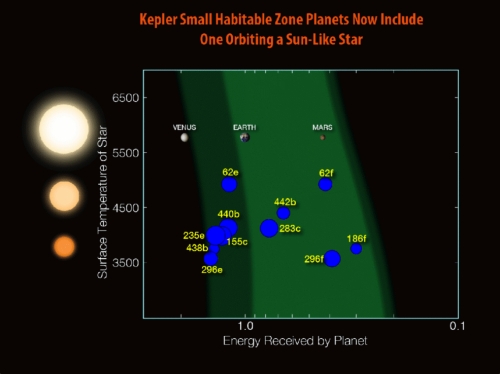 Image: Since Kepler launched in 2009, twelve planets less than twice the size of Earth have been discovered in the habitable zones of their stars. These planets are plotted relative to the temperature of their star and with respect to the amount of energy received from their star in their orbit in Earth units. The light and dark shaded regions indicate the conservative and optimistic habitable zone. The sizes of the blue disks indicate the sizes of these exoplanets relative to one another and to the image of Earth, Venus and Mars, placed on this diagram for reference. Note that all the exoplanets discovered up until now are orbiting stars which are somewhat to significantly cooler and smaller than the sun. Kepler-452b is the first planet less than twice the size of Earth discovered in the habitable zone of a G-type star. Credit: NASA Ames/N. Batalha and W. Stenzel.

Next post: Searching for Extraterrestrial Life and Intelligence: Knowable and Unknowable