New Horizons: Thoughts on Looking Back

The New Horizons imagery has been breathtaking, and never more so than in the image below. Here we’re seeing Pluto seven hours after the July 14 closest approach, looking back at Pluto as it occults the Sun. The backlit atmosphere shows us layers of haze reaching 130 kilometers above the surface. 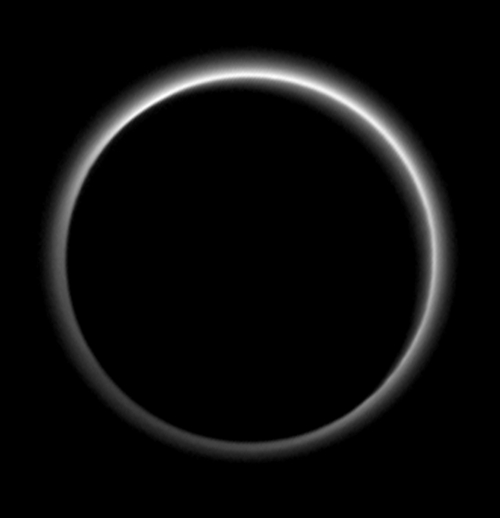 Image: Pluto sends a breathtaking farewell to New Horizons. Backlit by the sun, Pluto’s atmosphere rings its silhouette like a luminous halo in this image taken around midnight EDT on July 15. This global portrait of the atmosphere was captured when the spacecraft was about 2 million kilometers from Pluto and shows structures as small as 19 kilometers across. The image, delivered to Earth on July 23, is displayed with north at the top of the frame. Credit: NASA/JHUAPL/SwRI.

Alan Stern, principal investigator for New Horizons, speaks of having his jaw on the ground when he saw our first image of an atmosphere in the Kuiper Belt, and for good reason. We’ve known that Pluto had some kind of atmosphere, one that might well freeze out as the dwarf planet moved further away from the Sun, but here we actually see it in two distinct layers of haze, one about 80 kilometers up, the other at about 50 kilometers. The atmosphere is not a surprise, but the beauty of the image when first encountered is stunning.

Michael Summers (George Mason University) believes the hazes seen in the image help us understand the processes at work on the surface, helping to create complex hydrocarbon molecules that account for the reddish hue we all remarked on as New Horizons neared the world. Summers believes we are seeing hydrocarbons falling into the lower, colder parts of the atmosphere, condensing as ice particles to form the haze layers. Ultraviolet light from the Sun then converts the hazes into the dark hydrocarbons — tholins — found on Pluto’s surface. 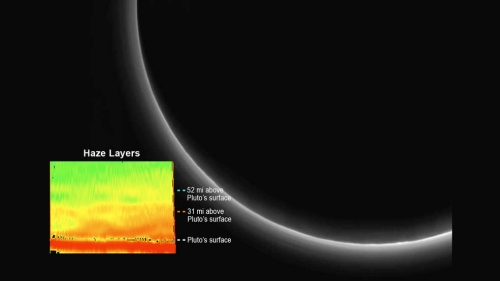 Image: Hydrocarbon hazes in Pluto’s atmosphere, extending as high as 130 kilometers above the surface, are seen for the first time in this image, which was taken on July 14. New Horizons’ Long Range Reconnaissance Imager captured this view about seven hours after the craft’s closest approach, at distance of about 360,000 kilometers from Pluto. Inset: False-color image of hazes reveals a variety of structures, including two distinct layers, one at 80 kilometers above the surface and the other at about 50 kilometers. Credit: NASA/JHUAPL/SwRI.

New Horizons’ LORRI instrument has also shown us details of Sputnik Planum, a region inside the western half of Tombaugh Regio, the now famous ‘heart’ of Pluto. A sheet of ice within the region appears to have flowed in ways similar to glaciers here on Earth, and indeed may still be flowing, a kind of surface we would expect only on active worlds. Meanwhile, we learn from the Ralph instrument that the center of Sputnik Planum is rich in nitrogen, carbon monoxide and methane ices.

“At Pluto’s temperatures of minus-390 degrees Fahrenheit, these ices can flow like a glacier,” says Bill McKinnon, deputy leader of the New Horizons Geology, Geophysics and Imaging team at Washington University in St. Louis. “In the southernmost region of the heart, adjacent to the dark equatorial region, it appears that ancient, heavily-cratered terrain has been invaded by much newer icy deposits.”

Take another look at Sputnik Planum, in an image that NASA released ten days ago. It’s a plain without craters that researchers believe to be no more than 100 million years old. 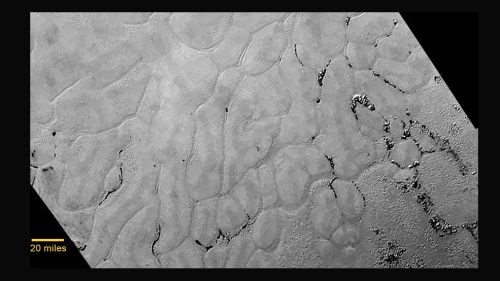 Image: This frozen region is north of Pluto’s icy mountains and has been informally named Sputnik Planum (Sputnik Plain), after Earth’s first artificial satellite. The surface appears to be divided into irregularly-shaped segments that are ringed by narrow troughs. Features that appear to be groups of mounds and fields of small pits are also visible. This image was acquired by the Long Range Reconnaissance Imager (LORRI) on July 14 from a distance of 77,000 kilometers. Features as small as 1 kilometer across are visible. The blocky appearance of some features is due to compression of the image. Credit: NASA/JHUAPL/SWRI.

Back in the days of Apollo 8, journalist David Brinkley was one of those covering the story when the spacecraft disappeared behind the Moon as the crew prepared for Lunar Orbit Insertion. The engine burn had to be performed on the far side, leaving controllers and journalists to wait for the signal that all had gone well. I remember Brinkley asking during the interminable wait, “What do you say when you come around from behind the Moon for the first time. For the first time?”

The chill down my spine at that thought back in 1968 was re-created when I saw the first of New Horizons’ ‘look back’ images. Even as our Voyagers pushed toward interstellar space, Pluto has remained a mystery, a symbol of all that is remote and at the edge of our knowledge. Now we have the view from behind Pluto, a lambent ring circling a place with features we have named. New Horizons reminds us that space exploration is transformative, its images shaping our identity as a species as we see what we have done and what we can become.