Looking for a good science fictional link to Saturn’s moon Tethys (you’ll see why in a moment), I came up short until I recalled Harry Bates’ story ‘A Matter of Size.’ First appearing in the April, 1934 issue of Astounding Stories, the novelette tells the breathless tale of giant humanoid beings who live on Tethys, the descendants of a long lost Earth civilization, and their micro-scale counterparts, who keep science alive and kidnap earthmen to use as breeding stock. Poor Tethys, it deserves better at the hand of science fiction authors, though I do note that Healy and McComas incorporated the story in their Adventures in Time and Space (1946), and to be fair, its manic humor includes a sinister ‘marriage machine,’ surely a science fiction first, and a device calculated to strike terror in the hearts of young readers in Bates’ era.

If you know of more respectable appearances of Tethys in science fiction, let me know. Meanwhile, the actual moon is starting to get intriguing. Just over 1000 kilometers across, Tethys was the third of Saturn’s moons to be discovered (by none other than Giovanni Domenico Cassini in 1684). It’s heavily cratered and sports a 400-kilometer impact crater called Odysseus, along with a 2000-kilometer fault known as the Ithaca Chasma. Its high reflectivity and low density (0.98 g/cm3) tell us that it is primarily made of water ice. 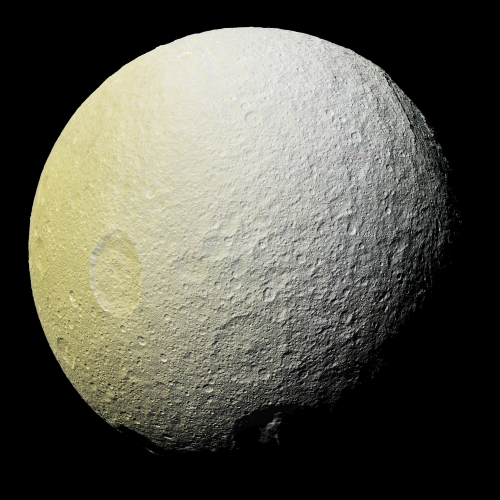 Image: This enhanced-color mosaic of Saturn’s icy moon Tethys shows a range of features on the moon’s trailing hemisphere. Tethys is tidally locked to Saturn, so the trailing hemisphere is the side of the moon that always faces opposite its direction of motion as it orbits the planet. Images taken using clear, green, infrared and ultraviolet spectral filters were combined to create the view, which highlights subtle color differences across Tethys’ surface at wavelengths not visible to human eyes. The moon’s surface is fairly uniform in natural color. Credit: NASA/JPL-Caltech/SSI.

Note the gradual color changes across the image, from yellowish to nearly white. A couple of things to keep in mind here: Tethys’ leading hemisphere, which is at the right side of the image, receives a bombardment of ice grains from Saturn’s E-ring. The moon is also subjected to charged particles from Saturn’s radiation belt on the trailing side, causing chemical changes and lowering the moon’s albedo by ten to fifteen percent. The pattern isn’t new — it appears on other Saturnian moons. What is new are arc-shaped reddish streaks now appearing on Tethys.

The unusual features show up in enhanced color imagery from the Cassini spacecraft, appearing as narrow, curved lines that this CICLOPS (Cassini Imaging Central Laboratory for Operations) news release likens to ‘graffiti sprayed by an unknown artist.’ A few of these red arcs show up in earlier observations, but the new images, made in April of this year, are the first to show the northern areas of Tethys under illumination bright enough to make out their extent. 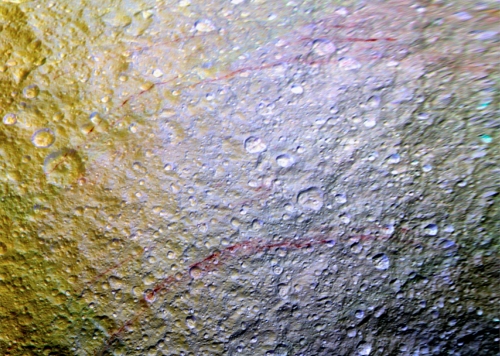 Image: Unusual arc-shaped, reddish streaks cut across the surface of Saturn’s ice-rich moon Tethys in this enhanced-color mosaic. The red streaks are narrow, curved lines on the moon’s surface, only a few kilometers wide but several hundred kilometers long. The red streaks are among the most unusual color features on Saturn’s moons to be revealed by Cassini’s cameras. Credit: NASA/JPL-Caltech/SSI.

What exactly are we looking at? One possibility is that these are features associated with fractures that are below the resolution of the available images. Another idea: Exposed ice with chemical impurities, perhaps resulting from outgassing from within the moon. In any case, we don’t find reddish features anywhere else in the Saturnian system except in a few of Dione’s craters. Where reddish features do occur in large numbers, of course, is on Jupiter’s moon Europa, where the surface is geologically young, just like the surface of Tethys.

“The red arcs must be geologically young because they cut across older features like impact craters, but we don’t know their age in years. If the stain is only a thin, colored veneer on the icy soil, exposure to the space environment at Tethys’ surface might erase them on relatively short time scales.”

Interesting. Remember that Cassini has been orbiting Saturn for eleven years now, and it’s clear that we still have surprises ahead. Mission scientists say they are planning to take a closer look at the red arcs of Tethys in November, one that will return images of higher resolution. As the Saturn system has moved into northern hemisphere summer over the past few years, northern latitudes have become much better illuminated. We’re now looking at features of surprising extent whose origin may tell us about Tethys’ composition and its interactions with Saturn.