A ‘Rosetta Stone’ for Super-Earths

The discovery and confirmation of the exoplanet HD 219134b give us a useful touchstone relatively close to the Solar System. At 21 light years away in the constellation Cassiopeia, HD 219134b distinguishes itself by being the closest exoplanet to Earth to be detected using the transit method. That’s useful indeed, because we’ll be able to use future instruments like the James Webb Space Telescope to learn about the composition of any atmosphere there. 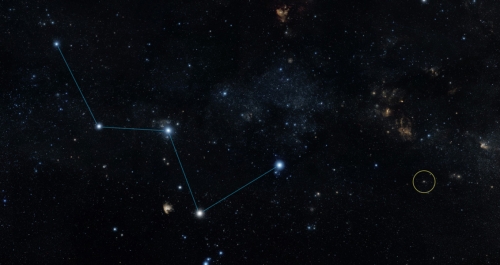 Image: This sky map shows the location of the star HD 219134 (circle), host to the nearest confirmed rocky planet found to date outside of our solar system. The star lies just off the “W” shape of the constellation Cassiopeia and can be seen with the naked eye in dark skies. It actually has multiple planets, none of which are habitable. Credit: NASA/JPL-Caltech/DSS.

Too close to its star to be considered a candidate for life, the new world is a ‘super-Earth,’ sighted by the HARPS-North instrument using radial velocity techniques, which measure the pull of the planet on its host star. HARPS-N was built by researchers at the University of Geneva and installed at the 3.6-meter Telescopio Nazionale Galileo on La Palma, in the Canary Islands. Ati Motalebi (UNIGE), lead author of the paper on this work, knew the significance of a potential transit in a world this close, a transit that radial velocity methods couldn’t uncover:

“When the first HARPS-N radial-velocity measurements indicated the presence of a 3-day planet around HD 219134, we immediately asked NASA for Spitzer space telescope time,” said Motalebi. “The idea was to check for a potential transit of the planet in front of the star, a mini eclipse, that would allow us to measure the size of the planet. To do this, we needed to go to space to reach the required precision.”

Initial readings were of a planet with a mass 4.5 times that of the Earth, orbiting the star — a K-dwarf a bit cooler and less massive than the Sun — in three days. Data from the Spitzer instrument then revealed the transit, its measurements indicating the planet to be about 1.6 times larger than the Earth. Combined with the earlier mass calculation, this radius yields a density of six grams per cubic centimeter, pointing to the possibility that this is a rocky planet. Michael Gillon (University of Liege), who led the Spitzer work, calls HD 219134b “a kind of Rosetta Stone for the study of super-Earths.”

HD 219134 turned out to host other worlds as well, with three additional longer-term planets discovered from the radial velocity work. The first of these is 2.7 times as massive as Earth, orbiting in a 6.8 day orbit. A second has 8.7 times Earth’s mass and orbits in 46.8 days. There is also a Saturn-class gas giant at 2.1 AU, orbiting the star in about 3 years.

The possibility exists that the two other inner planets are also transiting worlds, a prospect that has driven planning for future observations. Stéphane Udry (also at UNIGE) considers the potential:

“In particular, the future CHEOPS satellite of the European Space Agency (ESA), developed under Swiss leadership with a strong involvement of UNIGE and of the University of Bern, will provide the perfect tool for such observations. Being able to characterise three transiting super-Earths in a single bright and close system would provide incomparable constraints for planet formation and composition models, in particular for super-Earths.” 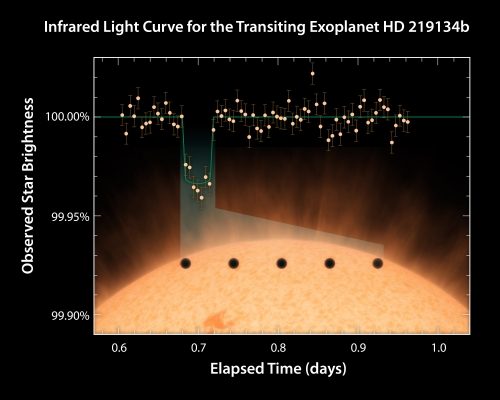 So HD 219134b, and perhaps its two inner-orbit cousins, could turn out to be a goldmine for future study as we turn CHEOPS as well as the JWST instrument toward them. JWST should be able to use transmission spectroscopy techniques to analyze starlight passing through any planetary atmosphere, while ground-based high-resolution spectroscopy should tell us still more, and there is the prospect of direct imaging of the outer planet in a system this close with the planned giant telescopes in the planning stage, including the European Extremely Large Telescope, the Giant Magellan Telescope, and the Thirty Meter Telescope.

The quality of the measurements of the radius, mass and then mean density actually foreshadows what can be expected from the future transit missions in preparation that will target bright stars (CHEOPS, TESS, PLATO). We also know from Kepler results that multi-transiting systems of small-size planets are numerous. It is then now highly suitable to search for traces of transits of the other planets in the systems. Finally, even if a potential atmosphere around the planet is expected a priori to be tiny, the brightness of the system makes it worth trying to detect features of this atmosphere in the UV, visible and NIR, from space and from the ground, especially in preparation for future measurements with larger facilities…

The paper is Motalebi et al., “The HARPS-N Rocky Planet Search I. HD219134b: A transiting rocky planet in a multi-planet system at 6.5 pc from the Sun,” accepted at Astronomy & Astrophysics (preprint). Both JPL and UNIGE offer news releases.