With the fanfare of the New Horizons flyby of Pluto/Charon, we learned that public interest in space can be robust, at least to judge from the number of people I spoke to who had never previously seemed aware of the subject. Here’s hoping that interest continues to be piqued — as it should be — by the ongoing events at Ceres and on Comet 67P/Churyumov-Gerasimenko. With Ceres we have another exploration of a hitherto unknown surface, while the Rosetta spacecraft is watching surface activity on a comet of the kind we’ve never seen up close.

We’ve already spent a year at the comet since Rosetta’s arrival on August 6 of last year, examining the object’s frozen ices and dust as they vaporize with increasing warmth from the Sun. The gas and dust ‘atmosphere’ thus created, called the coma, can produce the kind of spectacular tails we’ve long associated with comet observations from Earth. Perihelion occurs on August 13, when the comet reaches a distance of 186 million kilometers from the Sun. 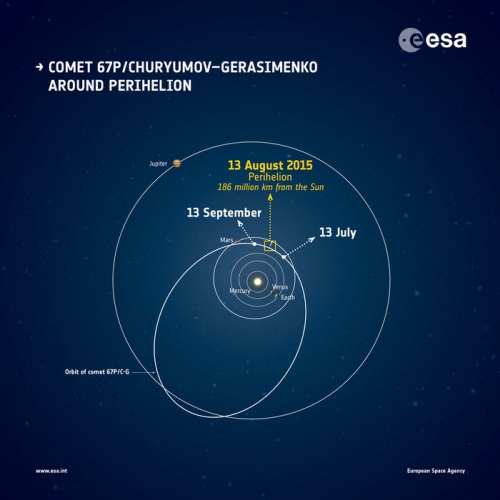 Image: The orbit of Comet 67P/Churyumov–Gerasimenko and its approximate location around perihelion, the closest the comet gets to the Sun. The positions of the planets are correct for 13 August 2015. Credit: ESA.

Comet 67P is hardly a Sun-grazer. Its orbit takes six and a half years, taking it to an aphelion of 850 million kilometers (just outside the orbit of Jupiter), while its perihelion is between the orbits of Mars and the Earth. Nonetheless, we’ve already seen increasing activity on the surface as frozen gases sublimate. No one can be sure what will happen as perihelion approaches, but this commentary on the Rosetta blog notes the 500-meter long fracture on the surface of the comet that will bear watching during peak activity. 67P is unlikely to break up (it has survived many previous orbits), but breakups do occur, as happened with Comet C/2012 S1 ISON in 2013.

It will be interesting to see how closely controllers bring Rosetta as perihelion approaches. The craft has been operating no closer than 150 kilometers in the last few months as a precaution against damage from the dust surrounding the nucleus, and because the distance depends on surface conditions, we don’t know just where Rosetta will be on August 13. We should have interesting imagery from perihelion passage relatively soon after the event. The Philae lander, meanwhile, has had only intermittent communications with controllers since regaining the link on June 13. An operational Philae at perihelion would be a bonus.

With just eight days left, keep an eye on the Rosetta blog, whose most recent entry covered the first release of pre-landing phase data from four of Rosetta’s instruments. The Archive Image Browser has also been updated with images from Rosetta’s NAVCAM and includes OSIRIS (Optical, Spectroscopic, and Infrared Remote Imaging System) images from the Earth, Mars and asteroid flybys that occurred enroute to the comet, between 2005 and 2010. You’ll also want to track Rosetta on Twitter @esa_rosetta and there is a Facebook page as well.

To get you in the proper frame of mind, ESA has released this animation.

Image: Images taken by Philae’s ROsetta Lander Imaging System, ROLIS, trace the lander’s descent to the first landing site, Agilkia, on Comet 67P/Churyumov–Gerasimenko on 12 November 2014. The first image was taken just over 3 km from the comet, and indicates the position of Agilkia and the area covered by the next image in the sequence, taken just 67 m away. The six images that follow were taken at approximately 10 second intervals prior to landing, with the final image of the sequence acquired 9 m above the touchdown site. The time the images were acquired, along with distance from the surface and image resolution, are marked on each image. The final slide is annotated with the estimated touchdown position and orientation of Philae, which has been calculated to within ±20 cm. Credit: ESA.

The coarse regolith seen close to touchdown shows grain sizes of 10 to 50 centimeters, and in the closest image, granules less than 10 cm across. Researchers believe the regolith extends to 2 meters deep in places and is free from fine-grained dust deposits. The large boulder visible in the early part of the animation is about 5 meters high. ESA points to its “peculiar bumpy structure and fracture lines running through it that suggest erosional forces are working to fragment the comet’s boulders into smaller pieces.” The trail of debris behind it shows us how particles move about on the surface of the eroding comet.

Next post: Orbital Change at Ceres (and a Note on the Euphrosynes)