Orbital Change at Ceres (and a Note on the Euphrosynes)

As we close in on perihelion at Comet 67P/Churyumov-Gerasimenko, the Dawn spacecraft continues its operations at Ceres. The contrast between Dawn’s arrival at Ceres in March and New Horizons’ flyby of Pluto/Charon could not have been more striking. With Dawn’s gentle ion push, we watched Ceres gradually grow in the skies ahead, and then settle into focus as the spacecraft began orbital operations. New Horizons was a thrilling, high-velocity fling, with a sudden transition to a backlit Pluto as we settled in to wait for months of data return.

Dawn is now heading for its third science orbit, gradually descending through 1900 kilometers toward an eventual 1500 kilometer altitude above the surface — this is fully three times closer to Ceres than the previous orbit. Again, the gentle nature of ion propulsion is evident, for the spacecraft will reach the new orbit in mid-August, when data operations and imagery again flow. Bear in mind as you think about Pluto and Ceres that the latter is about forty percent the size of Pluto, another dwarf planet (if you’re willing to buy the nomenclature).

Paul Schenk, a geologist at the Lunar and Planetary Institute in Houston, sees a different comparison, however, based on the nature of the surface Dawn has revealed. We’re seeing as much as 15 kilometers difference between crater bottoms and mountain peaks, according to this JPL news release. Says Schenk:

“The craters we find on Ceres, in terms of their depth and diameter, are very similar to what we see on Dione and Tethys, two icy satellites of Saturn that are about the same size and density as Ceres. The features are pretty consistent with an ice-rich crust.” 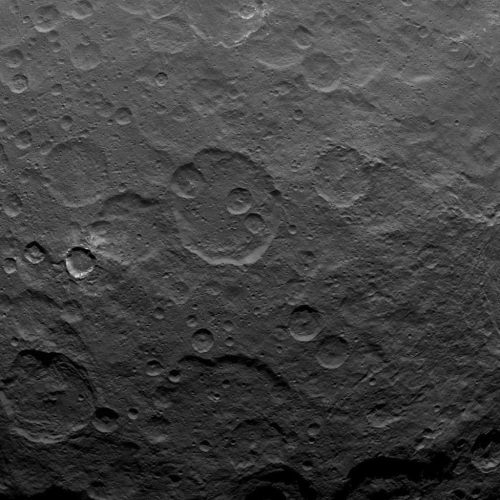 Image: A portion of the northern hemisphere of Ceres from an altitude of 4,400 kilometers. The image, with a resolution of 410 meters per pixel, was taken on June 25, 2015. Much closer images are on the way once the new science orbit is achieved. Credit: NASA/JPL.

NASA has released a topographic map based on images from Dawn’s framing camera taken at changing viewing angles and Sun positions. It’s a striking reminder of how much we’ve clarified what’s on the surface of the tiny world.

The process of turning terrain into features and thence into names is well advanced, with the International Astronomical Union’s recent approval of names like Occator, the crater in which we find the brightest of Ceres’ mysterious spots. Occator is about 90 kilometers in diameter and 4 kilometers deep. The name comes from a Roman agricultural deity, in keeping with the agriculture theme that begins with the name Ceres itself, Ceres being the Roman goddess of agriculture. A historical footnote: When Giuseppe Piazzi discovered Ceres in 1801, his own suggestion for naming it was Cerere Ferdinandea — Cerere (in Italian) for Ceres, Ferdinandea for King Ferdinand of Sicily. The dual name, thankfully, did not catch.

We also get craters like Haulani, which now designates the smaller of the craters with bright material, a 30-kilometer crater colder than the terrain around it. Other interesting picks: The crater Dantu, after a Ghanaian god, and Ezinu, after the Sumerian goddess of grain. We also have Yalode, a crater named for a Dahomey goddess, and Kerwan, a Hopi name associated with the spirit of sprouting maze. We’re learning a good deal about these craters already.

It was not Dawn but the NEOWISE mission (Near-Earth Object Wide-field Infrared Survey Explorer) that helped us understand the group of asteroids known as the Euphrosynes, objects with orbital trajectories that move well above the ecliptic. The eponymous Euphrosyne (you-FROH-seh-nee) is about 260 kilometers across, one of the ten largest asteroids in the main belt. According to this JPL news release, researchers believe it to be a remnant of a collision some 700 million years ago that formed the entire family of smaller asteroids.

The JPL work with NEOWISE was conducted in an attempt to learn more about their relationship with Near Earth Objects, those that have the potential to become problematic because of their close approaches to Earth. Gravitational interactions with Saturn are evidently the reason why the Euphrosynes are a source of some NEOs found on highly inclined orbits. We’re looking at a family of asteroids that can evolve into NEOs given enough time.

“The Euphrosynes have a gentle resonance with the orbit of Saturn that slowly moves these objects, eventually turning some of them into NEOs,” said Joseph Masiero, JPL’s lead scientist on the Euphrosynes study. “This particular gravitational resonance tends to push some of the larger fragments of the Euphrosyne family into near-Earth space.” 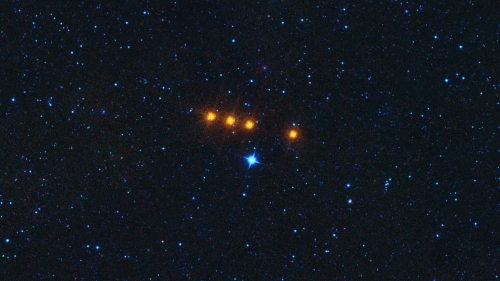 Image: The asteroid Euphrosyne glides across a field of background stars in this time-lapse view from NASA’s WISE spacecraft. WISE obtained the images used to create this view over a period of about a day around May 17, 2010, during which it observed the asteroid four times. Because WISE (renamed NEOWISE in 2013) is an infrared telescope, it senses heat from asteroids. Euphrosyne is quite dark in visible light, but glows brightly at infrared wavelengths. This view is a composite of images taken at four different infrared wavelengths: 3.4 microns (color-coded blue), 4.6 microns (cyan), 12 microns (green) and 22 microns (red). Credit: NASA/JPL-Caltech.

Remember that the WISE instrument, having surveyed the entire sky at infrared wavelengths, was put into hibernation in 2011 after cataloguing over 750 million asteroids, stars and galaxies. The spacecraft was re-purposed in the summer of 2013, focusing on asteroids. The JPL study took in 1400 Euphrosyne asteroids, finding them to be dark and in highly inclined, elliptical orbits. Because of their unique nature, says JPL’s Massiero, “…we are able to draw a likely path for some of the unusual, dark NEOs we find back to the collision in which they were born.”

Next post: A Brown Dwarf ‘Laboratory’ for Planet Formation