We’re in the immediate aftermath of Cassini’s August 17 flyby of Saturn’s moon Dione. The raw image below gives us not just Dione but a bit of Saturn’s rings in the distance. As always, we’ll have better images than these first, unprocessed arrivals, but let’s use this new one to underscore the fact that this is Cassini’s last close flyby of Dione. I’m always startled to realize that outside the space community, the public is largely unaware that Cassini’s days are numbered. It’s as if these images, once they began, would simply go on forever.

The reality is that processes are already in place for Cassini’s final act. The ‘Grand Finale’ will be the spacecraft’s close pass by Titan (within 4000 kilometers of the cloud tops), followed by its fall into Saturn’s atmosphere on September 15, 2017, a day that will surely be laden with a great deal of introspection. Bear in mind that not long after Cassini’s demise, we’ll also see the end of the Juno mission at Jupiter. We may still have our two Voyagers out there pushing toward the interstellar deep and New Horizons as well, but once we lose Juno, we’ll undergo a hiatus in which there will be no missions on the way to the giant planets. 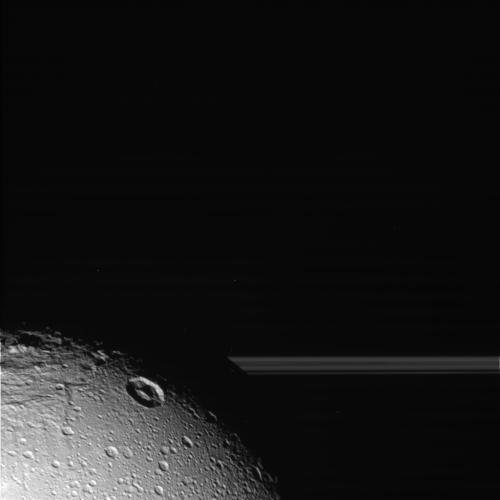 Image: A Cassini image taken on August 17, 2015. The camera was pointing toward Dione, and the image was taken using the CL1 and CL2 filters. This image has not been validated or calibrated. A validated/calibrated image will be archived with the NASA Planetary Data System in 2016. Credit: NASA/JPL-Caltech/Space Science Institute.

If you think back to the Voyager days, we were working ahead (on missions like Galileo) even as we tracked the Voyagers ever deeper into the Solar System. Cassini comes out of the Galileo days (it was launched in October of 1997, while Galileo was launched in October eight years earlier), a reminder of the parallel tracks that deep space exploration demands. Given the time to develop a mission and actually get it launched, we should always be a few steps ahead of ourselves. But as of 2018, we’re facing a long slog until the European Space Agency’s JUICE mission (Jupiter Icy Moon Explorer) and whatever NASA comes up with for Europa.

The Planetary Society’s Casey Dreier makes the case that the gap we’re facing will last at least eight years, between Cassini’s demise and any potential Europa mission from NASA. Eight years sounds like a long time, but it’s a best-case scenario, one possible only if we have a Europa mission ready to fly by 2022 and a fully functional SLS (Space Launch System) capable of launching it on a three-year trajectory.

.@elakdawalla 8-year gap is possible only if Europa is ready by 2022 *and* SLS launches it on a 3-year trajectory.

We’ve gotten so used to Cassini’s stunning images that it’s hard to imagine they’re going to stop, but perhaps that eight year gap or whatever it turns out to be will remind us of what we’ve had and how hard we have to work to make such missions happen again. All of which is why I’m paying particular attention to these final targeted flybys of places like Dione. The recent flyby should offer helpful comparisons between it and Saturn’s other icy moons. But it will also give us a glimpse of the moon’s north pole, and at a resolution of only a few meters. Cassini’s Composite Infrared Spectrometer will be mapping areas that show unusual thermal anomalies. 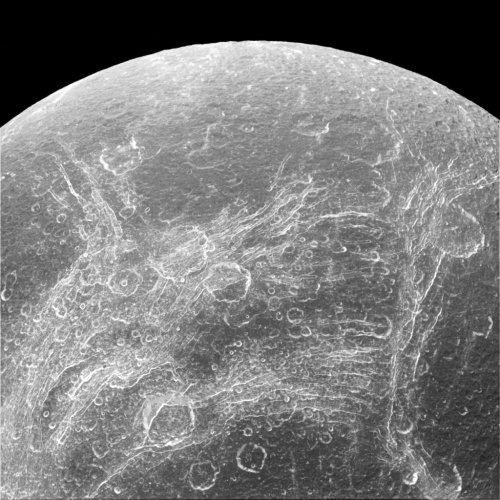 Image: Dione as seen by Cassini on an earlier pass, on April 11, 2015. This view looks toward the trailing hemisphere of Dione. North on Dione is up. The image was taken in visible light with the Cassini spacecraft narrow-angle camera. The view was acquired at a distance of approximately 110,000 kilometers from Dione. Image scale is 660 meters per pixel. Credit: NASA/JPL-Caltech/Space Science Institute.

Dione turns out to be an interesting place, quite different from Enceladus. Notice in the image the so-called chasmata, producing what the Voyager team once labelled ‘wispy terrain.’ Features that had once been assumed to be surface deposits of frost were later revealed, by Cassini, to be icy cliffs standing out brightly against the backdrop of surface fractures. We’re probably looking at the result of tidal stress and, as with Enceladus, we’re being given a graphic lesson in how such forces can shape the evolution of a moon both externally and internally.

Giovanni Cassini would discover four moons around Saturn — Tethys, Dione, Iapetus and Rhea — although naming the satellites wouldn’t occur until John Herschel suggested in the mid-19th Century that the four be named after the Titans of classical myth. It’s interesting to note that Dione has two co-orbital ‘moons’ of its own — Helene and Polydeuces — located at Dione’s Lagrangian points 60 degrees ahead and behind Dione. A subsurface ocean is a possibility here, based on observations and modeling of mountains like Janiculum Dorsa, and given inevitable tidal heating, it could explain some of Dione’s surface features. 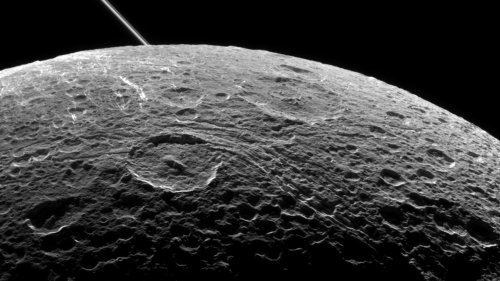 Image: A view of Saturn’s moon Dione captured by NASA’s Cassini spacecraft during a close flyby on June 16, 2015. The diagonal line near upper left is the rings of Saturn, in the distance. Credit: NASA/JPL-Caltech/Space Science Institute.

“Dione has been an enigma, giving hints of active geologic processes, including a transient atmosphere and evidence of ice volcanoes. But we’ve never found the smoking gun. The fifth flyby of Dione will be our last chance,” said Bonnie Buratti, a Cassini science team member at NASA’s Jet Propulsion Laboratory in Pasadena, California.

Last chance indeed, at least for a time. The close moon flybys of late 2015 will be followed by Cassini’s departure from Saturn’s equatorial plane to begin the set-up for the mission’s final year, in which the spacecraft will move repeatedly between Saturn and the ring system. Let’s hope that a new wave of exploration will get us back to Saturn’s moons so that images like these don’t take on the almost antique air now settling in over Apollo landing site photos, scenes that taunt us with where we have been and make us ask where we are truly bound.

Next post: A Supernova Trigger for Our Solar System