Yesterday’s article on supernovae ‘triggers’ for star and planet formation shed some light on how a shock wave moving through a cloud of gas and dust could not only cause the collapse and contraction of a proto-star but also impart angular momentum to an infant solar system. Today’s essay focuses on a somewhat later phase of system formation. Specifically, how is it that gas giants like Jupiter and Saturn can form in the first place, given core accretion models that have ‘trigger’ problems of their own?

Here’s the issue: To create a gas giant, you need plenty of hydrogen and helium, material in which a solar nebula would be rich. But we’re learning a lot about how planetary systems evolve, and the emerging reality is that the gas disks from which planets are made usually last a comparatively brief time, somewhere on the order of one to ten million years. That would imply that the gas giants had to accumulate their atmospheres within this timeframe.

But how? Jupiter’s atmosphere is massive enough that it requires a large solid core. Forming first, that ice and rock object, itself of planetary size, then causes the gravitational inflow of gas and dust. So we’re asking that a core perhaps ten times the size of Earth form in no more than than a few million years. Hal Levison (SwRI), lead author of a new study on this issue, calls this “the timescale problem,” as you can see in this news release from his parent institution. It’s a problem, says Levison, that “has been sticking in our throats for some time.”

Because if you look at rocky worlds like the Earth, the current thinking is that it needed at least 30 million years to form, and that’s a bare minimum — the number could reach 100 million years. During this period, small objects gradually interact, banging into each other to create larger rocks, and so on in a process that leads to planetesimals and ultimately to terrestrial-class worlds. So how do we get the gas giant’s core to form quickly enough to enable gas accumulation sufficient to produce the observed thick atmospheres of Jupiter and Saturn? 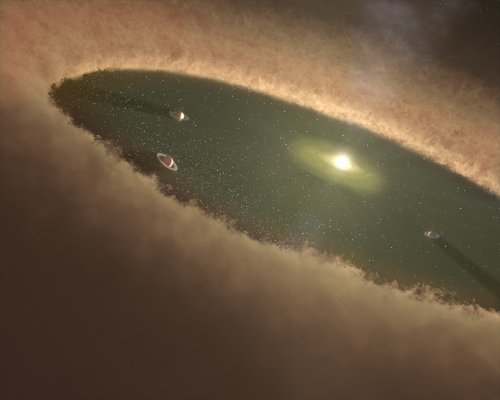 Image: This artist’s concept of a young star system shows gas giants forming first, while the gas nebula is present. Southwest Research Institute scientists used computer simulations to nail down how Jupiter and Saturn evolved in our own solar system. These new calculations show that the cores of gas giants likely formed by gradually accumulating a population of planetary pebbles – icy objects about 30 centimeters in diameter. Credit: NASA/JPL-Caltech.

The Levison paper, co-authored with Martin Duncan (Queen’s University, Ontario) and Katherine Kretke (SwRI) makes the case that a 10 million year timeframe for a gas giant’s core is sufficient if the infant planet accumulates small planetary ‘pebbles,’ here explained as objects of ice and dust about 30 centimeters in diameter. Objects in this size range quickly spiral onto a protoplanet when sufficient gas is present. The rapidly accumulating gas acts as the snare to gather the core materials, which are concentrated by drag and gravitationally collapse.

Levison and colleagues believe that this ‘aerodynamic drag and collapse’ model can produce cores of the needed size in timeframes as short as a few thousand years. Moreover, properly tuned, the method produces a Solar System not so different from what we see. That ‘tuning’ involves assuming pebble formation timed just right so that gravitational interactions among the growing planetesimals cause the larger of them to scatter the smaller out of the disk, slowing down their further growth. Ironically, we need pebbles that aren’t in too much of a hurry:

“If the pebbles form too quickly, pebble accretion would lead to the formation of hundreds of icy Earths,” said Kretke. “The growing cores need some time to fling their competitors away from the pebbles, effectively starving them. This is why only a couple of gas giants formed.”

We wind up with a system that forms between one and four gas giants some 5 to 15 AU from the Sun, which isn’t a bad match at all for our own Solar System, with its two gas giants and the ice giants Uranus and Neptune. This is a computer simulation that, unlike numerous earlier attempts at modeling the core accretion model, does produce gas giants in the timeframe and configuration needed. The formation of gas giants early in a system’s history, then, remains consistent with the basic model, with a short period of core formation no longer a deal breaker.

Previous post: A Supernova Trigger for Our Solar System