The mapping of Ceres continues at a brisk pace. The Dawn spacecraft is now operating at 1470 kilometers from the surface, taking eleven days to capture and return images of the entire surface. As this JPL news release points out, each eleven day cycle consists of fourteen orbits, so we’re accumulating views of this formerly faint speck in unprecedented detail. Within the next two months, Dawn will map Ceres — all of Ceres — six times.

Have a look, for example, at this view of one of Ceres’ more intriguing surface features. Taken by Dawn’s framing camera on August 19, the image has a resolution of 140 meters per pixel. 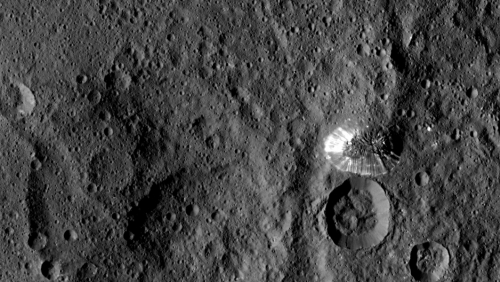 Image: NASA’s Dawn spacecraft spotted this tall, conical mountain on Ceres from a distance of 1,470 kilometers. The mountain, located in the southern hemisphere, stands 6 kilometers high. Its perimeter is sharply defined, with almost no accumulated debris at the base of the brightly streaked slope. Credit: NASA/JPL-Caltech/UCLA/MPS/DLR/IDA.

The naming of surface features also continues, the image below showing a mountain ridge at lower left that’s in the center of Urvara crater. The 163-kilometer Urvara takes its name from an Indian and Iranian deity of plants and fields. 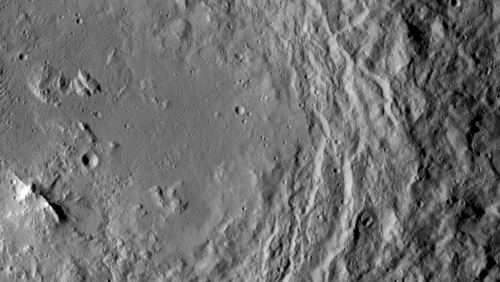 And below we have Gaue crater at the bottom of the frame, named after a Germanic goddess of the harvest. 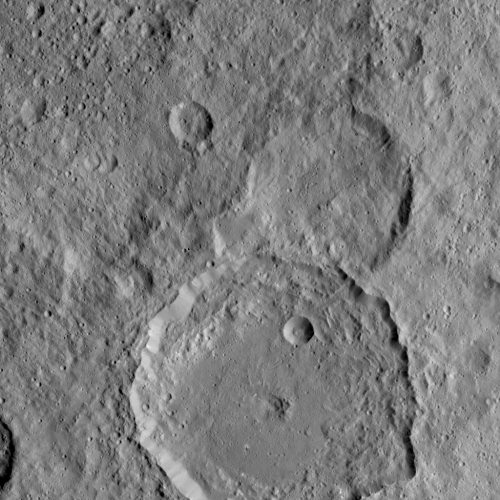 “Dawn is performing flawlessly in this new orbit as it conducts its ambitious exploration. The spacecraft’s view is now three times as sharp as in its previous mapping orbit, revealing exciting new details of this intriguing dwarf planet.”

How to get views as good as Dawn is currently sending without actually making the trip? Rayman points out in his latest Dawn Journal entry that a telescope 217 times the diameter of Hubble could provide the same images, which makes a click on the Ceres image gallery all the more preferable. At its current height, Dawn’s camera sees a square 140 kilometers to the side, which is less than one percent of the almost 2.8 million square kilometer surface of the world.

Ahead for Dawn is a set of six mapping cycles (the images above come from the first of these), with changes in camera angle providing stereo views that will help us understand the topography. As it records infrared and visible spectra of the terrain, Dawn is also returning a radio signal that will help researchers probe the dwarf planet’s gravitational field, a key to the distribution of mass inside the object. At 308 million kilometers from Earth, Dawn’s radio signals take 34 minutes to make the round trip. Remember that all this is being accomplished despite the earlier failure of two of the craft’s reaction wheels, a problem in spacecraft orientation that has been surmounted by ground controllers and will not affect the outcome of the mission.