Back to the Ice Giants?

As data return from New Horizons continues, we can hope that an encounter with a Kuiper Belt Object is still in its future. But such an encounter will, like the flyby of Pluto/Charon itself, be a fleeting event past an object at huge distance. Our next chance to study a KBO might take place a bit closer in, and perhaps we’ll be able to study it with the same intense focus that Dawn is now giving the dwarf planet Ceres. How about an orbiter around Neptune, whose moon Triton is thought by many to be a KBO captured by the ice giant long ago?

The thought is bubbling around some parts of NASA, and was voiced explicitly by the head of the agency’s planetary science division, Jim Green, at this week’s meeting of a working group devoted to missions to the outer planets. Stephen Clark tackles the story in Uranus, Neptune in NASA’s Sights for a New Robotic Mission, which recounts the basic issues now in play. What comes across more than anything else is the timescale involved in putting together flagship missions, multi-billion dollar efforts on the order of our Cassini Saturn orbiter. 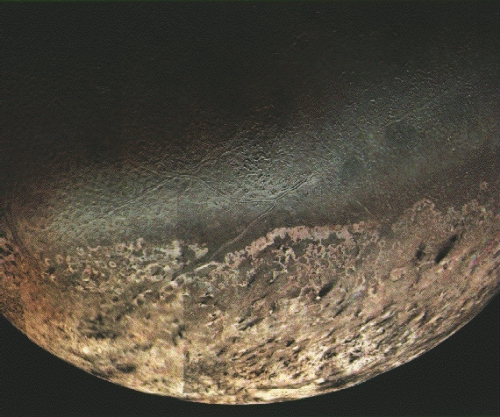 Right now Europa is the more immediate priority when it comes to outer planets work, and for good reason, since NASA has already approved a probe to the Jovian moon. Here we’re talking about 2022 as the earliest possible launch date for a spacecraft that would orbit Jupiter and perform repeated close flybys of Europa, a world we need to study close-up because of the evidence for a liquid water ocean beneath its crust and the possibility of life there. Whether such a probe actually flies as early as 2022 is problematic, and so is the launch vehicle, which in a perfect confluence of events could conceivably be NASA’s powerful Space Launch System.

I say ‘perfect’ confluence because the muscular SLS, if it lives up to expectations, would offer more robust mission options not just for Europa but for all the outer planets. Before any of that happens, of course, we have to build and fly SLS. While issues like that remain fluid, the current investigations into still later missions to Uranus and Neptune would seem to be premature, but they have to be, given not just the scientific but the bureaucratic issues involved. The JPL study on Uranus and Neptune ponders missions that could be launched probably in the 2030s, with the expectation of coming up with a mission design that could be used at both of the ice giants, although cheaper options will also be considered.

In any case, space missions begin with preliminary studies that launch a process feeding into the decadal surveys that set priorities for the next ten years of research. The last such survey, coming out of the National Research Council in 2011, gave particular weight to Mars sample return and the Europa probe. Getting an ice giant mission into the next decadal survey is no sure thing, given a strong case to be made for further investigation of Titan, and Clark notes that Venus is also likely to gain support.

So it’s early days indeed for Uranus and Neptune, but conceptual studies are a critical first step toward eventual approval. It’s daunting, and a bit humbling, to realize that if all goes well — if the bureaucratic gauntlet can be successfully run all the way through myriad technical studies and peer review into the budgeting phase and beyond — any mission to the ice giants will arrive half a century after Voyager 2 made our first and only encounters with these worlds. A return with orbiters would give us the opportunity to evaluate the major differences between the ice giants and the larger gas giants around which we’ve been able to conduct orbital operations. 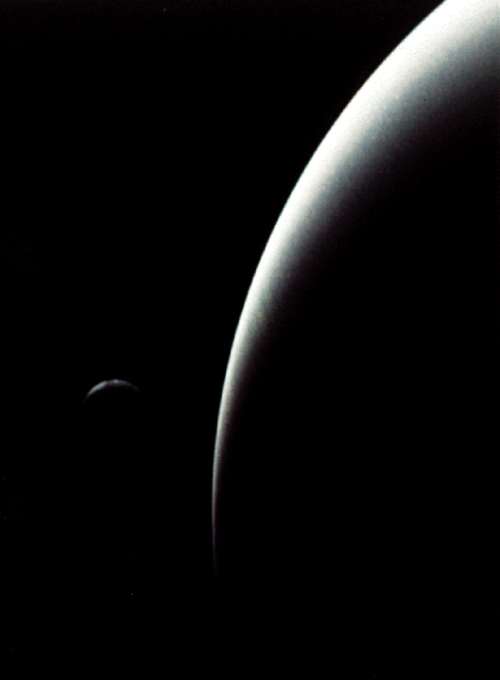 Image: Voyager 2 image of the crescents of Neptune and Triton taken on its outbound path, about 3 days after closest approach. The picture is a composite of images taken from a distance of almost 5 million km as Voyager 2 flew southward at an angle of 48 degrees to the ecliptic after its encounter with Neptune, the final encounter of its journey through the solar system. Credit: NASA/JPL.

It’s often said that we want missions that can be flown within the lifetime of the people who designed them, which is an understandable though mistaken thought. If you were a planetary scientist, would you turn down the chance to work on a Uranus/Neptune mission design even if you were unlikely to see it arrive? Clark quotes William McKinnon (Washington University, St. Louis) on the ice giant probe concept: “An ice giant mission, presumably an orbiter, is, alas, over the horizon as far as my lifespan is concerned, so I salute those who will live to see it!”

Which is what we do, looking forward to the next generation if we can’t complete a task within our own. On the individual level we can say little about the details of our own mortality, so there is no guarantee of survival to mission completion even for relatively nearby targets. We keep building spacecraft anyway. In the case of the outer system, we take decades to design, approve, build and fly spacecraft not in the name of individual ego but of a shared humanity.

The interstellar effort places this principle in even starker terms, for in terms of the physics we understand today, missions to another star will be a matter of, at best, decades and perhaps centuries of flight time. We can hope that rather than turning away from this effort, we continue to probe it with better designs, continuing missions and a determination to keep exploring.

Next post: The Prime Directive – A Real World Case