A KBO Target for New Horizons

What we’ll eventually want is a good name. 2014 MU69 is the current designation for the Kuiper Belt Object now selected as the next destination for New Horizons, one of two identified as possibilities, and the one the New Horizons team itself recommended. Thus we have a target — a billion and a half kilometers beyond Pluto/Charon — for the much anticipated extended mission, but whether that mission will actually occur depends upon NASA review processes that are not yet complete. Still, the logic of putting the spacecraft to future use is hard to miss, as John Grunsfeld, chief of the agency’s Science Mission Directorate, is the first to note:

“Even as the New Horizon’s spacecraft speeds away from Pluto out into the Kuiper Belt, and the data from the exciting encounter with this new world is being streamed back to Earth, we are looking outward to the next destination for this intrepid explorer. While discussions whether to approve this extended mission will take place in the larger context of the planetary science portfolio, we expect it to be much less expensive than the prime mission while still providing new and exciting science.” 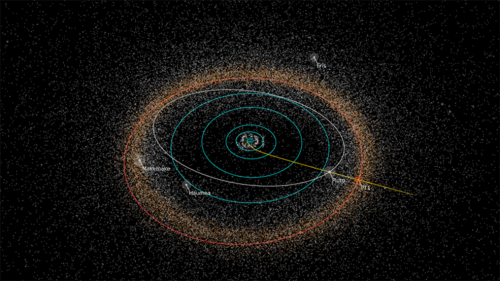 Image: Path of NASA’s New Horizons spacecraft toward its next potential target, the Kuiper Belt object 2014 MU69, nicknamed “PT1” (for “Potential Target 1”) by the New Horizons team. Although NASA has selected 2014 MU69 as the target, as part of its normal review process the agency will conduct a detailed assessment before officially approving the mission extension to conduct additional science. Credit: NASA/Johns Hopkins University Applied Physics Laboratory/Southwest Research Institute/Alex Parker.

We wind up with a situation where action precedes future decision. While the extended mission proposal will not be turned in to NASA until next year, the spacecraft can’t delay its preparations for a rendezvous with 2014 MU69 — trajectory changes factor into the equation. New Horizons, as this JHU/APL news release points out, will perform four maneuvers in late October and early November to make the necessary course changes for a January 1, 2019 flyby.

In anticipation of probable work beyond Pluto/Charon, New Horizons has the necessary hydrazine for a KBO intercept, and we’ll be able to monitor its communications and data return for years to come. Researchers had their eye on the kind of primitive object out of which dwarf planets like Pluto themselves may have been made, and the new target fits the bill.

“2014 MU69 is a great choice because it is just the kind of ancient KBO, formed where it orbits now, that the Decadal Survey desired us to fly by,” said New Horizons Principal Investigator Alan Stern, of the Southwest Research Institute (SwRI) in Boulder, Colorado. “Moreover, this KBO costs less fuel to reach [than other candidate targets], leaving more fuel for the flyby, for ancillary science, and greater fuel reserves to protect against the unforeseen.”

As to that new name, 2014 MU69 is already being called PT1, for ‘potential target 1,’ but will want something a bit more muscular, and certainly more poetic. You’ll recall how tricky it was to find a KBO for this encounter in the first place (see, for example, New Horizons: Potential KBO Targets Identified). Among those found after the search began in 2011, none were within range of the craft’s fuel supply. It took the Hubble Space Telescope to discover, in the summer of 2014, the two prime candidates. And it’s easy to understand Alan Stern’s enthusiasm. 2014 MU69. at about 45 kilometers across, is ten times times bigger than the average comet and a thousand times more massive, even if it’s about 1/10,000th the mass of Pluto.

It wasn’t that long ago — in August of 1992, to be specific — that David Jewitt and Jane Luu discovered the first trans-Neptunian object beyond Pluto/Charon, one that gave rise to the term ‘cubewano,’ named after the latter part of its designation, (15760) 1992 QB1. Jewitt and Luu liked the name ‘Smiley’ for the KBO, but there is already an asteroid with that name (1613 Smiley), so like 2014 MU69, even the first identified KBO could use a new monicker. Whatever we call it, 2014 MU69 should give us a look at the early days of Solar System formation some 4.6 billion years ago, preserved by distance and the outer system deep freeze.