Hitchhiker to the Outer System

At the Jet Propulsion Laboratory in Pasadena, Masahiro Ono has been using supercomputer simulations to model a new way of moving between small bodies in the Solar System. We’ve had a demonstration in the last few years of what ion propulsion can do to enable orbital operations at one asteroid (Vesta) followed by a journey to another (Ceres) and orbital insertion there. But Ono is looking at ways to simplify the process of asteroid and comet rendezvous that replaces the need for propellant during the orbital insertion and landing phases.

Call it Comet Hitchhiker. “Hitchhiking a celestial body is not as simple as sticking out your thumb, because it flies at an astronomical speed and it won’t stop to pick you up. Instead of a thumb, our idea is to use a harpoon and a tether,” says Ono, who presents the idea today at the American Institute of Aeronautics and Astronautics SPACE conference in Pasadena. The work has intriguing implications for our investigations of the Kuiper Belt and outer system.

Ono’s method uses reusable tethers that, as this JPL news release explains, are best understood by means of a deep sea fishing analogy. As when a fisherman, having hooked a fish, releases more line under moderate tension, letting the line play out but gradually braking, so a spacecraft would sling an extendable tether toward a comet or asteroid, with a harpoon attached to the tether acting as the ‘hook.’ The spacecraft then releases tether even as it applies a regenerative brake to harvest kinetic energy as the craft accelerates. 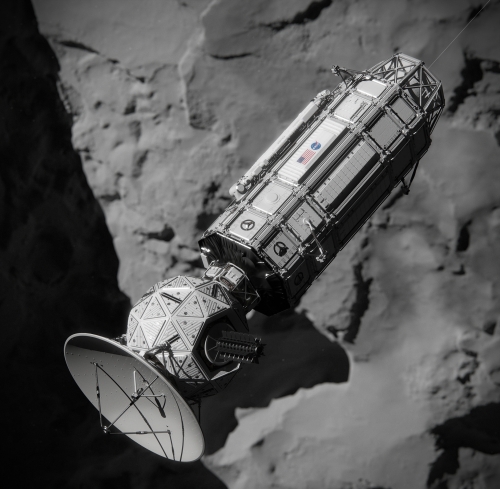 Image: Comet Hitchhiker, shown in this artist rendering, is a concept for orbiting and landing on small bodies. Credit: NASA/JPL-Caltech/Cornelius Dammrich.

According to Ono’s simulations, a long enough line allows Comet Hitchhiker to match velocity with the target gradually, after which it begins to reel in the tether for a gentle descent. The idea, Ono believes, works in both directions. After conducting its investigations at the object in question, the spacecraft uses harvested energy to retrieve the tether and accelerate away to another object. The potential for studying five to ten asteroids in a single mission is on the table. 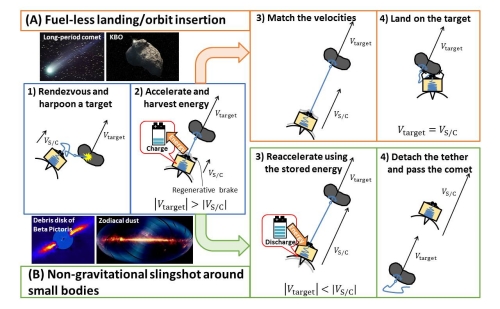 The question, of course, is what kind of tethers could handle both the harpoon impact on the surface and the demands of the subsequent maneuver. To study the prospects, Ono and colleagues have been using a mathematical formulation they call the Space Hitchhike Equation, relating the specific strength of the tether, the mass ratio between spacecraft and tether, and the needed velocity change to make the operation work. Enormous tension will be placed on the tether and heat will be generated by the rapid decrease in speed for orbit and landing.

The hitchhike maneuver would require a tether anywhere from 100 to 1000 kilometers long. Ono is reporting that a velocity change of 1.5 kilometers per second can be managed with existing materials like Zylon and Kevlar, but a 10 kilometer per second velocity change would be possible with future technologies like carbon nanotubes and a diamond harpoon. The latter would give us sufficient delta-V to land on or orbit long-period comets or Kuiper Belt Objects, objects for which current methods only offer us flyby options.

Consider, too, the prospects for non-gravitational slingshots around small bodies, as Ono reports in a description of this work:

A comet hitchhiker can obtain ~5 km/s of additional delta-V by utilizing just 25% of the harvested energy for reeling in the tether and/or driving electric propulsion engines. The tether is detached from the target after the desired delta-V is obtained. Our concept enables to design a fast trajectory to a wide range of destinations in the Solar System by taking full advantage of the high relative velocity, abundance, and orbital diversity of small bodies. For example, by hitching a comet with q=0.5 AU, a comet hitchhiker can reach the current orbital distance of Pluto (32.6 AU) in 5.6 years and that of Haumea (50.8 AU) in 8.8 years.

With the European Space Agency’s Rosetta spacecraft continuing operations around Comet 67P/Churyumov–Gerasimenko and ongoing work with Dawn at Ceres, will Comet Hitchhiker open up future options for studying multiple small bodies in a single mission? Much depends on what happens next. Ono and team plan to do further modeling and experiments using materials simulating a comet or asteroid surface. Their work is being supported by a Phase 1 study from the NASA Innovative Advanced Concepts (NIAC) program. Ono’s description of Comet Hitchhiker is available at the NIAC site.

Next post: Equinox at Saturn: Puzzling Out the A Ring