Equinox at Saturn: Puzzling Out the A Ring

I’m really going to miss Cassini when it takes its plunge into Saturn’s atmosphere in 2017. Having an orbiter in the outer system means that periodically we’ve been handed spectacular imagery and vast amounts of data for present and future analysis. Each new encounter now, such as the recent one with Dione, is a poignant reminder of how successful this mission has been, and how much we could gain with similar instrumentation around the ice giants.

Meanwhile, I look at this striking view of Saturn and its rings from 20 degrees above the ring plane, a mosaic built from 75 exposures using Cassini’s wide angle camera, and marvel at the view. The images were made in August of 2009, a day and a half after Saturn equinox, when the Sun was exactly overhead at the planet’s equator. The result is a darkening of the rings from this perspective because of the Sun’s lower angle to the ring plane, with shadows cast across the ring structure. It will be a while before we see this view again — even if we had another spacecraft somehow in place, equinox on Saturn occurs only once every 15 Earth years. 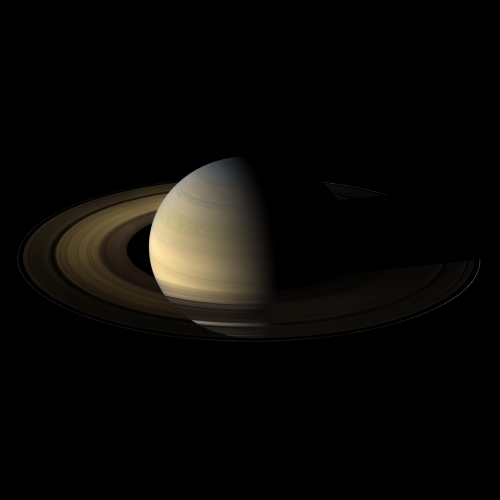 Image: This close to equinox, illumination of Saturn’s rings by sunlight reflected off the planet vastly dominates any meager sunlight falling on the rings. Hence, the half of the rings on the left illuminated by planetshine is, before processing, much brighter than the half of the rings on the right. On the right, it is only the vertically extended parts of the rings that catch any substantial sunlight. With no enhancement, the rings would be essentially invisible in this mosaic. To improve their visibility, the dark (right) half of the rings has been brightened relative to the brighter (left) half by a factor of three, and then the whole ring system has been brightened by a factor of 20 relative to the planet. So the dark half of the rings is 60 times brighter, and the bright half 20 times brighter, than they would have appeared if the entire system, planet included, could have been captured in a single image. Credit: NASA/JPL/Space Science Institute.

What the equinox event gave Cassini scientists was the opportunity to see unusual shadows and wavy structures that appeared during a time when the temperature of the rings’ icy particles began to drop because of the Sun’s position. A recent study in Icarus shows that during the equinox, Cassini’s Composite Infrared Spectrometer found temperatures that matched models of ring particle cooling over much of the expanse of the rings. But the outermost section — the A ring — turned out to be an anomaly, much warmer than the models predicted, with a temperature spike particularly evident in the middle of the A ring.

The JPL researchers believe that differences in the structure of Saturn’s ring particles account for the variation. As this JPL news release explains, most ring particles are thought to have a fluffy exterior something like fresh snow. The A ring seems to be different, however, composed of particles roughly 1 meter wide made up of solid ice, with only a thin outer layer (regolith). Thus we seem to have a concentration of what JPL’s Ryuji Morishima, who led the recent work, calls “solid ice chunks,” a finding the researcher finds unusual. “Ring particles,” he adds, “usually spread out and become evenly distributed on a timescale of about 100 million years.”

“This particular result is fascinating because it suggests that the middle of Saturn’s A ring may be much younger than the rest of the rings,” says Linda Spilker, Cassini project scientist at JPL and a co-author of the study. “Other parts of the rings may be as old as Saturn itself.”

Another possibility: The particles in question are being confined to their present location, perhaps by a moon that existed in the region within the past hundred million years, to be destroyed later by an impact. In this scenario, ring debris might not have had time to diffuse evenly throughout the ring. The researchers also suggest that small ‘rubble-pile’ moonlets could be breaking up in the A ring under the gravitational influence of Saturn and its larger moons.

Cassini is far from finished, despite my musings about its fate. In fact, the spacecraft will measure the mass of the main rings during its last orbits, with the hope that the data will constrain the rings’ age. All of this will give us further insights into how ring structures like these work, with the equinox data showing how short-lived changes can occur that reveal the rings’ deep structure. Until now, we’ve been unable to probe more than a millimeter below the surface of these countless particles, but we’re learning to build models of what must be there.

The paper is Morishima et al., “Incomplete cooling down of Saturn’s A ring at solar equinox: Implication for seasonal thermal inertia and internal structure of ring particles,” Icarus 23 June 2015 (abstract).

Next post: The Shape of Space Telescopes to Come