Hard to believe it’s been 55 days since the New Horizons flyby. When the event occurred, I was in my daughter’s comfortable beach house working at a table in the living room, a laptop in front of me monitoring numerous feeds. My grandson, sitting to my right with his machine, was tracking social media on the event and downloading images. When I was Buzzy’s age that day, Scott Carpenter’s Mercury flight was in the works, and with all of Gemini and Apollo ahead, I remember the raw excitement as the space program kept pushing our limits. I had a sense of generational hand-off as I worked New Horizons with my similarly enthusiastic grandson.

Carpenter took the second manned orbital flight in the Mercury program when Deke Slayton had to step down because of his heart condition, and the flight may be most remembered for the malfunction in Carpenter’s pitch horizon scanner, leading to the astronaut’s taking manual control of the reentry, which in turn led to overshooting the splashdown point by 400 kilometers. Carpenter’s status during reentry was unknown and fear rose as forty minutes passed before his capsule could be located. Exactly how the overshoot happened remains controversial, at least in some quarters.

But back to New Horizons, which hit its targets so precisely that no controversy is necessary. The intensive downlinking of tens of gigabits of data is now fully launched, with the prospect of about a year before we have the entire package. Principal Investigator Alan Stern (SwRI) explains:

“This is what we came for – these images, spectra and other data types that are going to help us understand the origin and the evolution of the Pluto system for the first time. And what’s coming is not just the remaining 95 percent of the data that’s still aboard the spacecraft – it’s the best datasets, the highest-resolution images and spectra, the most important atmospheric datasets, and more. It’s a treasure trove.” 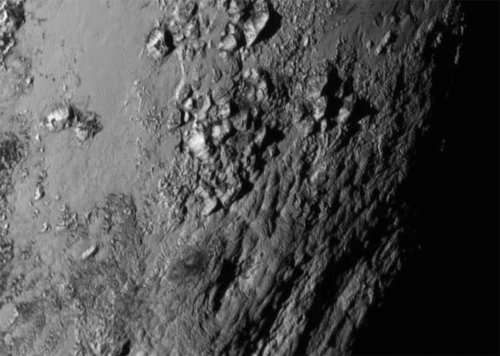 Image: This close-up image of a region near Pluto’s equator captured by New Horizons on July 14 reveals a range of youthful mountains rising as high as 3.4 kilometers above the surface of the dwarf planet. This iconic image of the mountains, informally named Norgay Montes (Norgay Mountains) was captured about 1 ½ hours before New Horizons’ closest approach to Pluto, when the craft was 77,000 kilometers from the surface of the icy body. The image easily resolves structures smaller than 1.6 kilometers across. The highest resolution images of Pluto are still to come, with an intense data downlink phase commencing on Sept. 5. Credit: NASA/Johns Hopkins University Applied Physics Laboratory/Southwest Research Institute.

Given images as rich as the above, the prospect of significantly more detailed views will keep the coming months lively, and after that, we have the possibility of a Kuiper Belt Object flyby in a New Horizons extended mission. Remember that since the flyby, the data being returned has been information collected by the energetic particle, solar wind and space dust instruments. Now we move into higher gear, although it’s a pace that still demands patience. Given the distance of the spacecraft from Earth (as I write, the craft is 65,512,553 kilometers beyond Pluto, and 33.36 AU from the Sun), the downlink rate is no more than 1-4 kilobits per second. 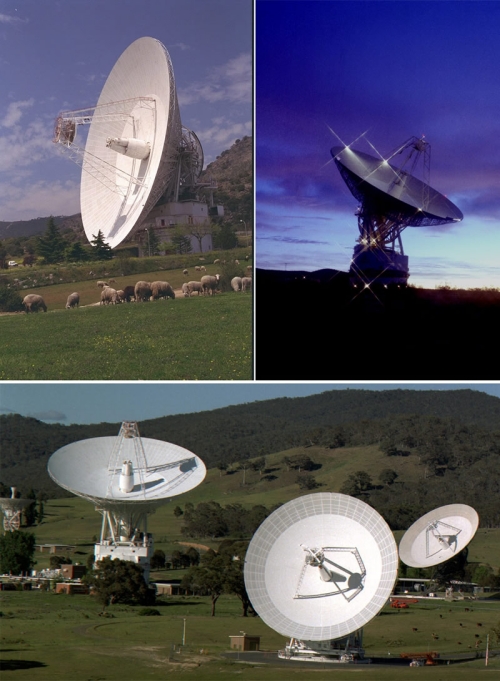 Image: All communications with New Horizons – from sending commands to the spacecraft, to downlinking all of the science data from the historic Pluto encounter – happen through NASA’s Deep Space Network of antenna stations in (clockwise, from top left) Madrid, Spain; Goldstone, California, U.S.; and Canberra, Australia. Even traveling at the speed of light, radio signals from New Horizons need more than 4 ½ hours to travel the 4.83 billion kilometers between the spacecraft and Earth. Credit: NASA.

New Horizons is sometimes described as the fastest spacecraft ever launched, which isn’t correct given the Helios probes, launched in 1974 and 1976, that reached 70 kilometers per second at closest approach to the Sun. Helios II, just slightly faster than its counterpart, can be considered the fastest man-made object in history. But it’s true that New Horizons left Earth traveling outward faster than any previous vehicle. Will it catch up with the Voyagers? No, because although it left Earth faster than either Voyager, it didn’t have the benefit of full-fledged gravitational assists around both Jupiter and Saturn. While Voyager 1 has a heliocentric speed of 17.05 kilometers per second, New Horizons is now at 14.49 kilometers per second.

Unprocessed imagery from New Horizons’ Long Range Reconnaissance Imager (LORRI) becomes available each Friday at the LORRI Images from the Pluto Encounter page, with the next batch due on September 11. And although it’s been widely published, I do want to get the Pluto flyby animation up on Centauri Dreams, and note that Stuart Robbins (SwRI), who created the fly-through sequence, has written up the process in To Pluto and Beyond. Robbins notes that this is a system we’re unlikely to revisit in our lifetimes, but the good news is that we still have an operational craft with the potential for at least one KBO flyby.

Previous post: The Shape of Space Telescopes to Come