Nitrogen Detection in the Exoplanet Toolkit

Extending missions beyond their initial goals is much on my mind as we consider the future of New Horizons and its possible flyby past a Kuiper Belt Object. But this morning I’m also reminded of EPOXI, which has given us views of the Earth that help us study what a terrestrial world looks like from a distance, characterizing our own planet as if it were an exoplanet. You’ll recall that EPOXI (Extrasolar Planet Observation and Deep Impact Extended Investigation) is a follow-on to another successful mission, the Deep Impact journey to comet Tempel 1.

As is clear from its acronym, EPOXI combined two extended missions, one following up the Tempel 1 studies with a visit to comet Hartley 2 (this followed an unsuccessful plan to make a flyby past comet 85P/Boethin, which proved to be too faint for accurate orbital calculations). The extrasolar component of EPOXI was called EPOCh (Extrasolar Planet Observation and Characterization), using the craft’s high resolution telescope to make photometric observations of stars with known transiting exoplanets. But the spacecraft produced observations of Earth that have been useful for exoplanet studies, as well as recording some remarkable views. 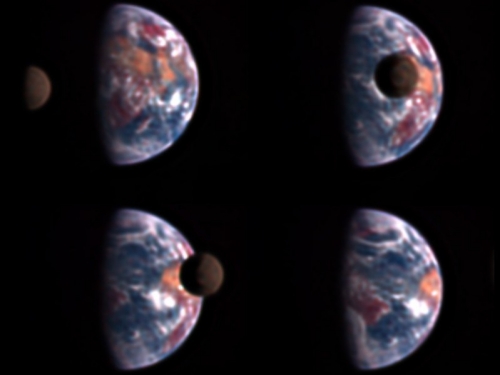 Although communications with EPOXI were lost in the summer of 2013, the mission lives on in the form of the data it produced, some of which are again put to use in a new paper out of the University of Washington. Edward Schwieterman, a doctoral student and lead author on the work in collaboration with the university’s Victoria Meadows, reports on Earth observations from EPOXI that have been compared to three-dimensional planet-modeling data from the university’s Virtual Planet Laboratory. The comparison has allowed confirmation of the signature of nitrogen collisions in our atmosphere, a phenomenon that should have wide implications.

The presence of nitrogen is significant because it can help us determine whether an exoplanet’s surface pressure is suitable for the existence of liquid water. Moreover, if we find nitrogen and oxygen in an atmosphere and are able to measure the nitrogen accurately, we can use the nitrogen as a tool for ruling out non-biological origins for the oxygen. But nitrogen is hard to detect, and the best way to find it in a distant planet’s atmosphere is to measure how nitrogen molecules collide with each other. The paper argues that these ‘collisional pairs’ create a signature we can observe, something the team has modeled and that the EPOXI work has confirmed.

Nitrogen pairs, written as (N2)2, are visible in a spectrum at shorter wavelengths, giving us a useful tool. The paper explains how this works:

A comprehensive study of a planetary atmosphere would require determination of its bulk properties, such as atmospheric mass and composition, which are crucial for ascertaining surface conditions. Because (N2)2 is detectable remotely, it can provide an extra tool for terrestrial planet characterization. For example, the level of (N2)2 absorption could be used as a pressure metric if N2 is the bulk gas, and break degeneracies between the abundance of trace gases and the foreign pressure broadening induced by the bulk atmosphere. If limits can be set on surface pressure, then the surface stability of water may be established if information about surface temperature is available.

It’s interesting as well that for half of Earth’s geological history, there was little oxygen present, despite the presence of life for a substantial part of this time. The paper argues that given Earth’s example, there may be habitable and inhabited planets without O2 we can detect. Moreover, atmospheres with low abundances of gases like N2 and argon are more likely to accumulate O2 abiotically, giving us a false positive for life.

A water dominated atmosphere lacks a cold trap, allowing water to more easily diffuse into the stratosphere and become photo-dissociated, leaving free O2 to build up over time. Direct detection of N2 through (N2)2 could rule out abiotic O2 via this mechanism and, in tandem with detection of significant O2 or O3, potentially provide a robust biosignature. Moreover, the simultaneous detection of N2, O2, and a surface ocean would establish the presence of a significant thermodynamic chemical disequilibrium (Krissansen-Totton et al. 2015) and further constrain the false positive potential.

Combining the EPOXI data with the Virtual Planetary Laboratory modeling demonstrates that nitrogen collisions that are apparent in our own atmosphere should likewise be apparent in exoplanet studies by future space telescopes. EPOXI, then, demonstrated that nitrogen collisions could be found in a planetary spectrum, and the VPL work modeling a variety of nitrogen abundances in an exoplanet atmosphere shows how accurately the gas can be measured. “One of the interesting results from our study,” adds Schwieterman, “is that, basically, if there’s enough nitrogen to detect at all, you’ve confirmed that the surface pressure is sufficient for liquid water, for a very wide range of surface temperatures,”