In Stephen Baxter’s novel Ultima (Roc, 2015), Ceres is moved by a human civilization in a parallel universe toward Mars, the immediate notion being to use the dwarf planet’s volatiles to help terraform the Red Planet. Or is that really the motive? I don’t want to give too much away (and in any case, I haven’t finished the book myself), but naturally the biggest question is how to move an object the size of Ceres into an entirely new orbit.

Baxter sets up an alternate-world civilization that has discovered energy sources it doesn’t understand but can nonetheless use for interstellar propulsion and the numerous demands of a growing technological society, though one that is backward in comparison to our own. That juxtaposition is interesting because we tend to assume technologies emerge at the same pace, supporting each other. What if they don’t, or what if we simply stumble upon a natural phenomenon we can tap into without being able to reproduce its effects through any known science?

Something of the same juxtaposition occurs in Kim Stanley Robinson’s Aurora (Orbit, 2015), where we find a society that has the propulsion technologies to enable travel at a pace that can get a worldship to Tau Ceti in a few human generations. We’ve discussed Aurora in these pages recently, looking at some of the problems in its science — I’ll let those better qualified than myself have the final word on those — but what I found compelling about the novel was its depiction of what happens aboard that worldship.

Because it’s not at all inconceivable that we might solve the propulsion problem before we solve the closed-loop life support problem, and that is more or less what we see happening in Aurora. A worldship could house habitats of choice, and if you think of some visions of O’Neill cylinders, you’ll recall depictions that made space living seem almost idyllic. But Robinson shows us a ship that’s simply too small for its enclosed ecologies to flourish. Travel between the stars in such a ship would be harrowing, as indeed it turns out to be in the book. Micro-managing a biosphere is no small matter, and we have yet to demonstrate the ability. 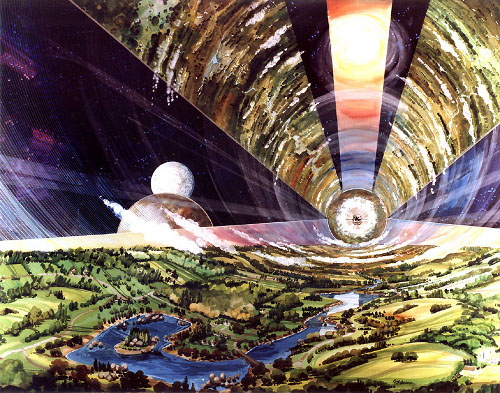 Image: The O’Neill cylinder depicted here is one take on what might eventually become an interstellar worldship. Keeping its systems and crew healthy is a skill that will demand space-based experimentation, and plenty of it. Credit: Rick Guidice/NASA.

In Baxter’s Ultima, what happens with Ceres is compounded by the fact that just as humans don’t fully understand their power source, they also have to deal with an artificial intelligence whose motives are opaque. Put the two together and you can see why the movement of Ceres to a new position in the Solar System takes on an aura of menace. Various notions of a ‘singularity’ posit a human future in which our computers are creating entirely new generations of themselves that are designed according to principles we cannot begin to fathom. What happens then, and how do we ensure that the resulting machines want us to survive?

With Ceres very much in mind, I was delighted to receive the new imagery from the Dawn spacecraft at the present-day Ceres (in our non-alternate reality), showing us the bright spots that have commanded so much attention. Here we’re looking at a composite of two different images of Occator crater, one made with a short exposure to capture as much detail as possible, the other a longer exposure that best captures the background surface. 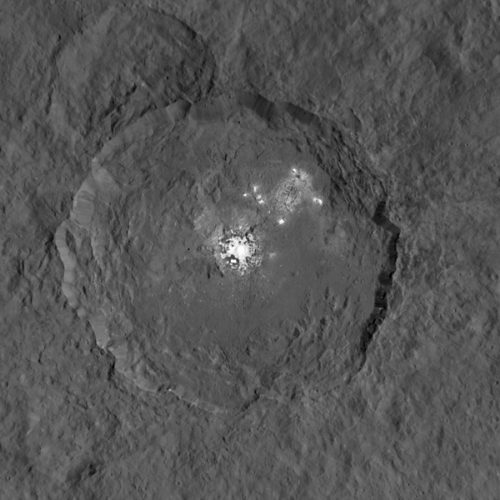 Image: Occator crater on Ceres, home to a collection of intriguing bright spots. The images were obtained by Dawn during the mission’s High Altitude Mapping Orbit (HAMO) phase, from which the spacecraft imaged the surface at a resolution of about 140 meters per pixel. Credit: NASA/JPL-Caltech/UCLA/MPS/DLR/IDA.

We’re looking at the view from 1470 kilometers, with images offering three times better resolution than we had from the spacecraft’s previous orbit in June. Two eleven-day cycles of surface mapping have now been completed at this altitude, with the third beginning on September 9. All of Ceres is to be mapped six times over the next two months, with each cycle consisting of fourteen orbits. Changing angles in each mapping cycle will allow the Dawn researchers to put together 3-D maps from the resulting imagery.

So we’re learning more about the real Ceres every day. Given our lack of Baxter’s ‘kernels’ — the enigmatic power sources that energize his future civilization as well as the unusual but related culture they encounter — we may do better to consider this dwarf planet as a terraforming possibility in its own right, rather than a candidate for future use near Mars. On that score, I remind you of Robert Kennedy, Ken Roy and David Fields, who have written up a terraforming concept that could be applied to small bodies in or outside of the habitable zone (see Terraforming: Enter the ‘Shell World’ for background and citation).

It will be through myriad experiments in creating sustainable ecologies off-world that we finally conquer the life support problem. It always surprises me that it has received as little attention as it has in science fiction, given that any permanent human presence in space depends upon robust, recyclable systems that reliably sustain large populations. Our earliest attempts at closed-loop life support (think of the BIOS-3 experiments in the 1970s and 80s, and the Biosphere 2 attempt in the 1990s) have revealed how tricky such systems are. Robinson’s faltering starship in Aurora offers a useful cautionary narrative. We’ll need orbital habitats of considerable complexity as we learn how to master the closed-loop conundrum.