Given the flow of new imagery from New Horizons, I began to realize that mission data were changing my prose. To be sure, I still lean to describing the system as Pluto/Charon, because given the relative size of the two bodies, this really seems like a binary object to me. I tend to call it a ‘binary planet’ among friends because I still think of Pluto as a planet, dwarf or not. But when New Horizons blew through the Pluto/Charon system, it was finally possible to start talking separately about Charon, because now we were seeing it, for the first time, up close.

Charon as a distinct object from Pluto is a fascinating thought, one I’ve mused over since the days of the smaller object’s discovery in 1978. An enormous moon hanging in the sky, never changing its position, over a landscape unknown — the imagination ran wild. In the event, New Horizons outdid anything I ever conceived, with imagery of both worlds we’ll be debating for a long time. But in some ways my favorite of the images so far is the one just below. 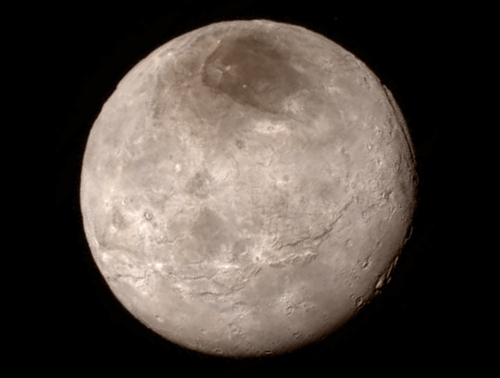 What’s striking about Charon at first glance is the darkening at the north pole, a phenomenon Carly Howett (Southwest Research Institute, Boulder) discussed in a recent blog article for NASA. Redder and darker it is, a circumstance Howett explains by reference to the surface composition of the northern polar region. A working theory is that traces of Pluto’s atmosphere reach Charon on occasion, where the gases come into contact with polar regions with temperatures between -258 and -213° C. This is a range not a lot higher than absolute zero (−273.15° C, or −459.67° Fahrenheit).

Gases arriving at Charon’s winter pole would simply freeze rather than escaping, so we have a deposit of Pluto’s atmospheric nitrogen, with methane and carbon monoxide, gradually building up. This would not occur at Charon’s somewhat warmer equator. When the winter pole re-emerges into sunlight, solar radiation on these ices produces tholins, which form when simple organic compounds like methane are irradiated. With their higher sublimation temperature, these tholins cannot escape back into space. Howett sums it up this way:

Charon likely has gradually built up a polar deposit over millions of years as Pluto’s atmosphere slowly escapes, during which time the surface is being irradiated by the sun. It appears the conditions on Charon are right to form red tholins similar to those shown, although we have yet to figure out exactly why. This is one of the many things I am looking forward to better understanding as we receive more New Horizons data over the next year and analyze it in conjunction with continued laboratory work.

Tholin color depends on the ratios of the molecules involved and the kind of radiation received — various shades have been produced in the laboratory. We don’t find them on Earth outside of our own laboratories, but tholins are thought to be abundant on the icy objects in the outer system, usually taking on a reddish brown hue. You may recall they’ve also been discussed in relation to Titan, where we’ve learned from Cassini measurements that tholins appear higher in the atmosphere than was once believed (see Titan’s Tholins: Precursors of Life?). Think of them not as a single specific compound but a range of molecules with a generally reddish color.

Did tholin-rich comets play a role in delivering the precursor materials needed for life to develop on Earth? It’s a notion we can’t rule out, but for now what we can do is study tholins in the places they naturally occur, and in the case of Charon, we can see that they are part of a mechanism that can explain surface color variations. The object 28978 Ixion, a Kuiper Belt object in orbital resonance with Neptune, appears to be particularly rich in tholins.

Meanwhile, the flow of data from New Horizons in just the last few days has more than doubled what we can see of Pluto’s surface at the 400 meter per pixel level. We’re finding still more puzzles as we push deeper into the imagery, with features that appear to be dune-like, and what seem to be nitrogen ice flows and valleys that could have been carved by such flows over the surface. The processes at work should provide fodder for countless dissertations. Here’s one of the new images — for more, see New Pluto Images from New Horizons: It’s Complicated. 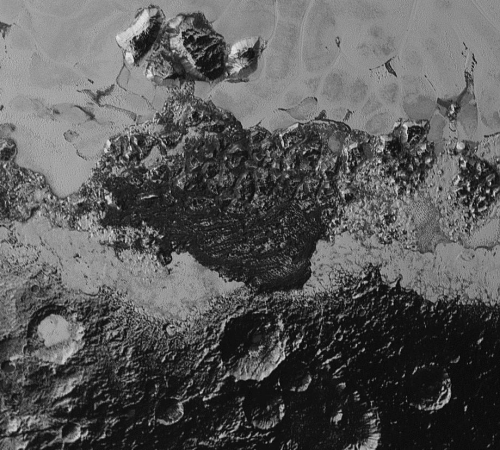 Image: This 350-kilometer wide view of Pluto from NASA’s New Horizons spacecraft illustrates the incredible diversity of surface reflectivities and geological landforms on the dwarf planet. The image includes dark, ancient heavily cratered terrain; bright, smooth geologically young terrain; assembled masses of mountains; and an enigmatic field of dark, aligned ridges that resemble dunes; its origin is under debate. The smallest visible features are 0.8 kilometers in size. This image was taken as New Horizons flew past Pluto on July 14, 2015, from a distance of 80,000 kilometers. Credit: NASA/Johns Hopkins University Applied Physics Laboratory/Southwest Research Institute.

“The surface of Pluto is every bit as complex as that of Mars,” said Jeff Moore, leader of the New Horizons Geology, Geophysics and Imaging (GGI) team at NASA’s Ames Research Center in Moffett Field, California. “The randomly jumbled mountains might be huge blocks of hard water ice floating within a vast, denser, softer deposit of frozen nitrogen within the region informally named Sputnik Planum.”

Heavily cratered terrain next to young icy plains, with the suggestion of dunes on a place whose atmosphere should be too thin to produce them. No wonder William McKinnon (Washington University, St. Louis) calls the latter a ‘head-scratcher.’ The surfaces of Pluto and Charon have delivered complexities galore, and we’re only now learning that Pluto’s atmospheric haze is far more complex than earlier thought, offering a twilight effect that helps light nightside terrain. “If an artist had painted this Pluto before our flyby, I probably would have called it over the top,” says New Horizons principal investigator Alan Stern, “but that’s what is actually there.”

And then there’s this (brought to my attention by Larry Klaes):