Seven years worth of Cassini images of Enceladus have told us what many have long suspected: The intriguing moon does indeed have a subsurface ocean. Not that the presence of water on Enceladus comes as a surprise: The south polar region in the area of the famous ‘tiger stripes’ has long been known to be venting vapor and liquid water from its fractures. The question had become, is this a regional body of water, or is the Enceladus ocean global?

To find out, a team at Cornell University led by Peter Thomas, whose work was just published in Icarus, charted about 5800 surface features, contrasting images taken at different times and at different angles. Using a combination of dynamical modeling and statistical analysis, they sought to find the best values for the interior that would explain an apparent libration or ‘wobble’ (0.120 ± 0.014°) detectable in the imagery, a larger motion by far than would be expected if the surface of Enceladus were solidly connected with its core. The size of the libration tells us that the ocean is indeed global. 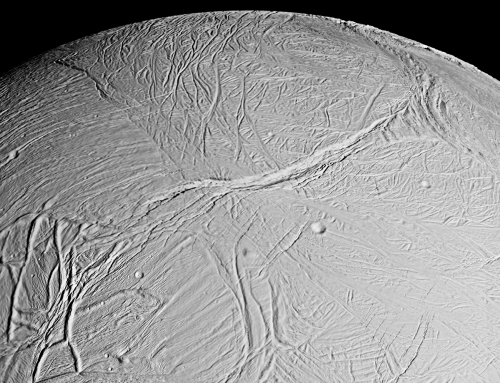 Image: What lies beneath… Now we learn that there is solid evidence for an ocean below this entire surface. Credit: NASA/JPL-CalTech.

Matthew Tiscareno, now at the SETI Institute after working on the Enceladus data at Cornell (he is a co-author of the just published paper), explains the significance of the finding for possible astrobiology:

“This exciting discovery expands the region of habitability for Enceladus from just a regional sea under the south pole to all of Enceladus. The global nature of the ocean likely tells us that it has been there for a long time, and is being maintained by robust global effects, which is also encouraging from the standpoint of habitability.” 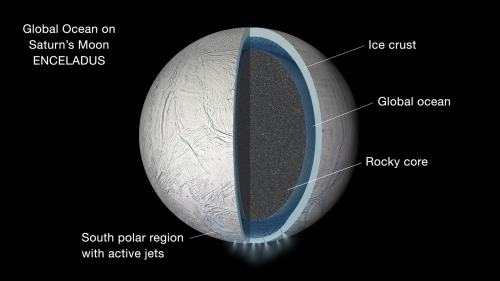 Image: This illustration is a speculative representation of the interior of Saturn’s moon Enceladus with a global liquid water ocean between its rocky core and icy crust. The thickness of layers shown here is not to scale. Scientists on NASA’s Cassini mission determined that the slight wobble of Enceladus as it orbits Saturn is much too large for the moon to be frozen from surface to core. The wobble, technically referred to as a libration, reveals that the crust of Enceladus is disconnected from its rocky interior. Credit: NASA/JPL-Caltech.

We’ve come a long way since the first Cassini discoveries of the plume of water vapor, ice and organic molecules erupting from Enceladus’ south pole. It was in 2009 that we learned by measuring the saltiness of the geyser particles that their source could only be a reservoir of liquid, and by 2014 it was possible to analyze the gravitational pull of the Saturnian moon on Cassini itself, which showed that at least a regional sea must be present under the ice.

Now we have a global ocean to deal with, although the question of how it remains liquid is still unresolved. Are tidal forces from Saturn’s gravity generating more heat than we realize? Much work remains as we try to answer that question. In the near term, Cassini is scheduled for a close flyby at the end of October in which it will pass a scant 49 kilometers above the moon’s surface. This ‘deep dive’ through Enceladus’ active plumes will be the closest yet. With a global ocean spewing material into space, the case for further work at Enceladus is overwhelming.