I have never been exactly indignant about the demotion of Pluto to ‘dwarf planet’ status but I do think it’s curious and in at least one respect too arbitrary for my taste. I’ll buy the idea that a planet needs to be round because of its own gravity, and I’ll sign off on the notion that to be a planet, an object has to be in orbit around the Sun (even though we do have apparent wandering planets in the interstellar deep, far from any star). But the International Astronomical Union also decided in its 2006 deliberations that a planet has to ‘clear’ its neighborhood of debris, thus sweeping out its orbit over time. That one, of course, is controversial.

Assuming the Earth is a planet, why are we worried about things like Near Earth Asteroids (NEAs)? Our planet clearly hasn’t swept out its neighborhood, not when we can number problematic asteroids in the thousands. Jupiter is estimated to have about 100,000 trojan asteroids in its orbital path as well, and Alan Stern, principal investigator for New Horizons, has pointed out on more than one occasion that if Neptune (obviously a planet) had cleared its orbit, Pluto itself wouldn’t be there, and the whole discussion might never have come up.

For that matter, we would not be having this discussion now if not for continuing discoveries in the Kuiper Belt that more or less force the issue. Eris was found in 2005, a world more massive than Pluto and first thought to be larger as well, leading to the temporary designation of it as the ‘tenth planet,’ and raising the question of what to do about a Kuiper Belt that might be stuffed with such objects. Here the matter seems to be one of simple redundancy. Nine, or eight, planets, is acceptable. Several thousand is not — it seems to devalue the notion altogether.

I can see why working this out is still controversial. Meanwhile, from a purely aesthetic point of view, I have a hard time looking at the image below and seeing it as anything other than a planet. Or, as I have said before, the larger component of a binary planetary system. 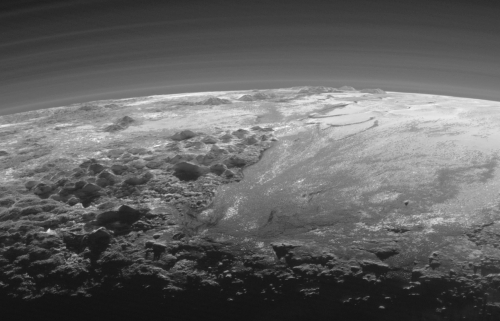 Image: Just 15 minutes after its closest approach to Pluto on July 14, 2015, NASA’s New Horizons spacecraft looked back toward the sun and captured a near-sunset view of the rugged, icy mountains and flat ice plains extending to Pluto’s horizon. The smooth expanse of the informally named Sputnik Planum (right) is flanked to the west (left) by rugged mountains up to 3,500 meters high, including the informally named Norgay Montes in the foreground and Hillary Montes on the skyline. The backlighting highlights more than a dozen layers of haze in Pluto’s tenuous but distended atmosphere. The image was taken from a distance of 18,000 kilometers to Pluto; the scene is 380 kilometers across. Credit: NASA/Johns Hopkins University Applied Physics Laboratory/Southwest Research Institute.

We see mountains here, plains, glaciers, but what really catches the eye is the multi-layered haze in Pluto’s thin nitrogen atmosphere. Here we’re looking at more than a dozen such layers extending all the way from the surface up to 100 kilometers. Mountains falling into shadow at sunset and a bank of low-lying haze near the terminator give us the sense of looking at a place in a constant state of change, a world laden with active patterns of weather. We seem to have the Plutonian version of a ‘hydrological’ cycle here, substituting nitrogen for water ice.

“We did not expect to find hints of a nitrogen-based glacial cycle on Pluto operating in the frigid conditions of the outer solar system,” said Alan Howard, a member of the mission’s Geology, Geophysics and Imaging team from the University of Virginia, Charlottesville. “Driven by dim sunlight, this would be directly comparable to the hydrological cycle that feeds ice caps on Earth, where water is evaporated from the oceans, falls as snow, and returns to the seas through glacial flow.”

Call this world what you will, the imagery is getting better and better. Here are some recent releases. 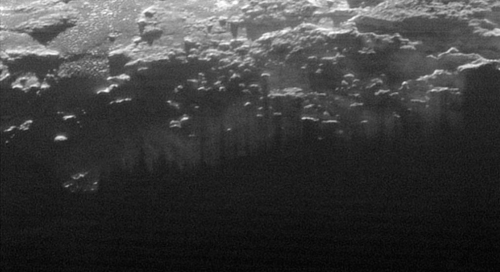 Image: In this small section of the larger crescent image of Pluto, taken by NASA’s New Horizons just 15 minutes after the spacecraft’s closest approach on July 14, 2015, the setting sun illuminates a fog or near-surface haze, which is cut by the parallel shadows of many local hills and small mountains. The image was taken from a distance of 18,000 kilometers, and the width of the image is 185 kilometers. Credit: NASA/Johns Hopkins University Applied Physics Laboratory/Southwest Research Institute. 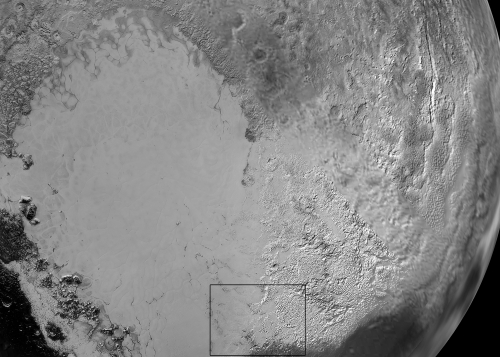 Image: Sputnik Planum is the informal name of the smooth, light-bulb shaped region on the left of this composite of several New Horizons images of Pluto. The brilliantly white upland region to the right may be coated by nitrogen ice that has been transported through the atmosphere from the surface of Sputnik Planum, and deposited on these uplands. Credit: NASA/Johns Hopkins University Applied Physics Laboratory/Southwest Research Institute. 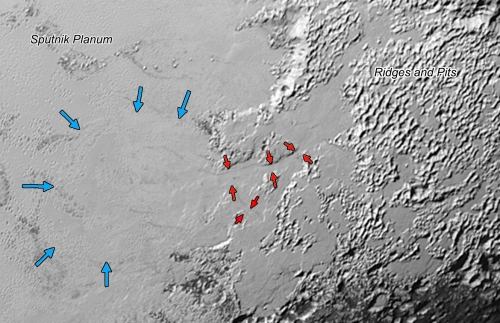 Image: Ice (probably frozen nitrogen) that appears to have accumulated on the uplands on the right side of this 630-kilometer wide image is draining from Pluto’s mountains onto the informally named Sputnik Planum through the 3- to 8- kilometer wide valleys indicated by the red arrows. The flow front of the ice moving into Sputnik Planum is outlined by the blue arrows. The origin of the ridges and pits on the right side of the image remains uncertain. Credit: NASA/Johns Hopkins University Applied Physics Laboratory/Southwest Research Institute. 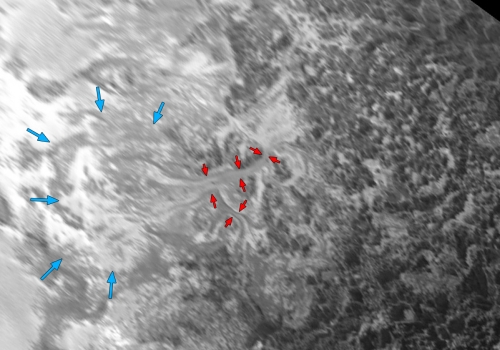 Image: This image covers the same region as the image above, but is re-projected from the oblique, backlit view shown in the new crescent image of Pluto. The backlighting highlights the intricate flow lines on the glaciers. The flow front of the ice moving into the informally named Sputnik Planum is outlined by the blue arrows. The origin of the ridges and pits on the right side of the image remains uncertain. This image is 630 kilometers across. Credit: NASA/Johns Hopkins University Applied Physics Laboratory/Southwest Research Institute.