On Habitability around Red Dwarf Stars

Learning that there is flowing water on Mars encourages the belief that human missions there will have useful resources, perhaps in the form of underground aquifers that can be drawn upon not just as a survival essential but also to produce interplanetary necessities like rocket fuel. What yesterday’s NASA announcement cannot tell us, of course, is whether there is life on Mars today, though if the detected water is indeed flowing up from beneath the surface, it seems a plausible conjecture that some form of bacterial life may exist below ground, a life perhaps dating back billions of years.

I’ve speculated in these pages that we may in fact identify life around other stars — through studies of exoplanet atmospheres — before we find it elsewhere in our Solar System, given the length of time we have to wait before return missions to places like Enceladus and Europa can be mounted. Perhaps the Mars news can help us accelerate that schedule, at least where the Red Planet is concerned.

Meanwhile, we continue to construct models of habitability not just for Martian organisms, but for more advanced creatures on planets around other suns. As witness today’s topic, recent work out of the University of Washington that is showing us that what seemed to be a major problem for life on planets around red dwarfs may in some cases actually be a blessing.

Of Tides and Magnetic Fields

Our understanding about planets around red dwarf stars is that potentially habitable worlds are close enough to their star to be tidally locked, with one side always facing the star. We’re seeing interesting depictions of such worlds in recent science fiction, such as Stephen Baxter’s Proxima (Roc, 2014), where a habitable planet around Proxima Centauri undergoes ‘winters’ due not to axial tilt but varying levels of activity on the star itself. But tidal locking is problematic, as is the process of getting into it. Circularizing an orbit creates tidally generated heat that can affect surface conditions as well as any magnetic field.

Will planets like these have magnetic fields in the first place?According to Rory Barnes (University of Washington), the general belief among astronomers is that they’re unlikely, a conclusion the new work rejects. It’s an important issue because magnetic fields are believed to protect planetary atmospheres from the charged particles of the stellar wind, thus preventing them from being dissipated into space. Such fields can also protect surface life from dangerous radiation, as from flare-spitting M-dwarfs. 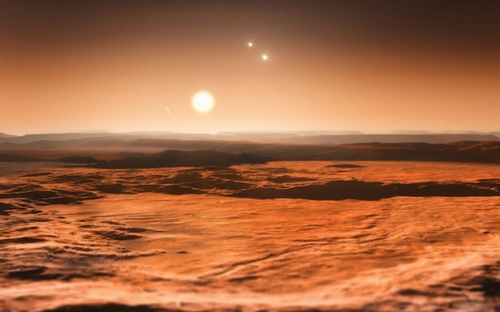 Image: An artist’s impression of the Gliese 667 system from one of the super-Earths that orbit Gliese 667C. Image credit: ESO/M. Kornmesser.

The new paper from Barnes and former UW postdoc Peter Driscoll (now at the Carnegie Institution for Science) takes a look at magnetic fields on planets around red dwarfs. Driscoll began with an examination of tidal effects. In our Solar System, think of Io, its surface punctuated by volcanic activity, to see tidal heating in action. Says Driscoll: “The question I wanted to ask is, around these small stars, where people are going to look for planets, are these planets going to be roasted by gravitational tides?”

And what would be the effect of tidal heating on magnetic fields over the aeons? To find out, Driscoll and Barnes used simulations of planets around stars ranging from 0.1 to 0.6 of a solar mass. Their finding is that tidal heating can help by making a planetary mantle more able to dissipate interior heat, a process that cools the core and thus helps in the creation of a magnetic field.

Thus we have a way to protect the surface of a red dwarf’s planet in an environment that can show a good deal of flare activity in the early part of the star’s lifespan. “I was excited to see that tidal heating can actually save a planet in the sense that it allows cooling of the core,” says Barnes. “That’s the dominant way to form magnetic fields.” A planet in the habitable zone of a red dwarf in its early flare phase may have just the protection it needs to allow life.

But note the mass threshold described in the paper:

…tides are more influential around low mass stars. For example, planets around 0.2 Msun stars with eccentricity of 0.4 experience a tidal runaway greenhouse for 1 Gyr and would be tidally dominated for 10 Gyr. These time scales would increase if the orbits were fixed, for example by perturbations by a secondary planetary companion. We find a threshold at a stellar mass of 0.45Msun, above which the habitable zone is not tidally dominated. These stars would be favorable targets in the search for geologically habitable Earth-like planets as they are not overwhelmed by strong tides.

With stellar mass as the key, as explored in the paper over a range of masses and orbital eccentricities, various outcomes emerge. Planets with low initial eccentricity experience only weak tides, while planets on highly eccentric orbits experience much stronger effects – high initial eccentricity and tight orbits around low mass stars produce extreme tides that help to circularize planetary orbits. As the mass of the star increases, the habitable zone moves to larger orbital distances and tidal dissipation decreases.

Given all these scenarios, helpful magnetic fields are only one possible outcome, and even when they form, they may not be sufficient to protect life. The Driscoll/Barnes model includes planetary cores that undergo super-cooling, thus solidifying and killing the magnetic dynamo. Also, hotter mantle temperatures and lower core cooling rates can weaken the magnetic field below the point at which it can protect the planet’s surface.

Other possibilities: Planets orbiting close to their star in highly eccentric orbits will experience enough tidal heating to produce a molten surface. Tidal heating can also produce high rates of volcanic eruption, producing a toxic environment for life (the atmospheres of such planets may well be detectable with future generations of space- and ground-based telescopes). Tidal heating effects are most extreme for planets in the habitable zone around very small stars, those less than half the mass of the Sun.

So we don’t exactly have a panacea that makes all red dwarf star planets in the habitable zone likely to support life. What we do have is a model showing that for worlds orbiting a star of above 0.45 solar masses, the tidal effects do not overwhelm the possibilities for surface life while they do allow the formation of a protective magnetic field. Some of the magnetic fields generated last for the lifetime of the planets.

Needed improvements in the model, the paper suggests, include factors like variable internal composition and dissipation in oceans or internal liquid layers. “With growing interest in the habitability of Earth-like exoplanets, the development of geophysical evolution models will be necessary to predict whether these planets have all the components that are conducive to life.”