Imagine what you could do with a comet at your disposal. In Seveneves, Neal Stephenson’s new novel (William Morrow, 2015), a Musk-like character named Sean Probst decides to go after Comet Grigg-Skjellerup. A lunar catastrophe has doomed planet Earth and humanity is in a frantic rush to figure out how to save at least a fraction of the population by living off-world. Probst understands that a comet would be a priceless acquisition:

“You can’t make rocket fuel out of nickel. But with water we can make hydrogen peroxide — a fine thruster propellant — or we can split it into hydrogen and oxygen to run big engines…. We have to act immediately on long-lead-time work that addresses what we do know. And what we know is that we need to bring water to the Cloud Ark. Physics and politics conspire to make it difficult to bring it up from the ground. Fortunately, I own an asteroid mining company…”

And so on. Lest you think that was a spoiler, be advised that it’s just the tip of a story of Stephensonian complexity. In the world of the novel, even with virtually all the world’s resources committed to putting people and things into space, time is short, and moving a cometary mass will take years. Given today’s technology, we couldn’t move Grigg-Skjellerup the way Probst intends, but I kept thinking about comets and their resources as I pondered the latest news from a comet we’re getting to know very well thanks to Rosetta: 67P/Churyumov–Gerasimenko.

Traveling with a Comet

Rosetta reached Comet 67P/Churyumov–Gerasimenko in August of last year, so we’ve had a year of up-close study, with perihelion of the object’s 6.5 year orbit occurring on August 13 of this year. Watching a comet in action as it reaches perihelion and then recedes from the Sun is what the mission was designed for, and we’re learning that it was money well spent. As the European Space Agency recently reported, we now see a water ice cycle at work on the comet.

“We found a mechanism that replenishes the surface of the comet with fresh ice at every rotation: this keeps the comet ‘alive’… We saw the tell-tale signature of water ice in the spectra of the study region but only when certain portions were cast in shadow. Conversely, when the Sun was shining on these regions, the ice was gone. This indicates a cyclical behaviour of water ice during each comet rotation.”

The data come from September of 2014, focusing on a single square kilometer region on the comet’s ‘neck,’ an area that at the time was one of the comet’s most active. Rotating roughly every twelve hours, the studied block on 67P/Churyumov–Gerasimenko moved into and out of sunlight. The researchers believe that water ice on the surface and just below it sublimates when illuminated by the Sun, the gases flowing away from the comet into space. As the region again darkens, the surface cools, and subsurface water ice that briefly continues sublimating freezes out again as the vapor reaches the surface. A new layer of ice is formed, only to sublimate as the cycle starts again when the Sun illuminates that part of the surface. 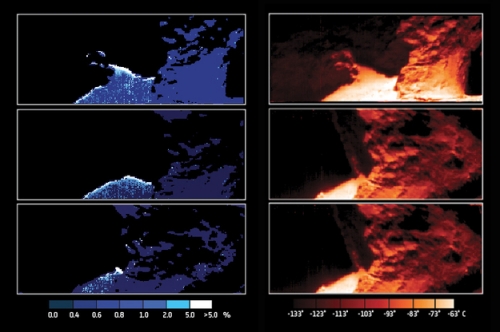 So we now have observational proof of the suspected water ice cycle on a cometary surface. The patch of the comet under study accounted for about three percent of the total amount of water vapor being emitted by the whole comet at the same time. Cometary activity, as you would expect, increased as 67P/Churyumov-Gerasimenko neared perihelion, producing abundant data from VIRTIS that will offer a further look as the object’s surface changes.

Further work appearing in Nature (and like the previous paper, discussed at the ongoing European Planetary Science Congress in Nantes, France) gives us a good reading on how the comet wound up with its unusual shape. The culprit: A low-speed collision between two separately formed comets. Lead author Matteo Massironi (University of Padova, Italy), an associate scientist of the OSIRIS team, used a 3D model to determine the slopes of over 100 terraced features seen on the comet’s surface, visualizing how they extended into the subsurface. The features were found to be coherently oriented around the comet’s lobes.

“It is clear from the images that both lobes have an outer envelope of material organised in distinct layers, and we think these extend for several hundred metres below the surface. You can imagine the layering a bit like an onion, except in this case we are considering two separate onions of differing size that have grown independently before fusing together.”

The ordered strata uncovered by Massironi and team show that a low-speed collision was the only way for the objects to merge while preserving the ordered strata found deep in the comet. So we can call 67P/Churyumov-Gerasimenko a ‘contact binary,’ one with a history that explains how it got its distinctive shape, which many people liken to a ‘rubber duck.’ Variations in the surface today are likely caused by different rates of sublimation. The frozen gases embedded within individual cometary layers are not necessarily distributed evenly throughout the comet. 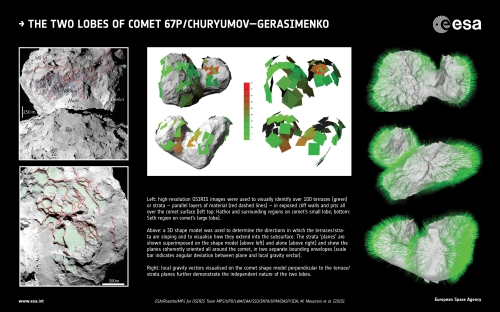 Image (click to enlarge): Left: high-resolution OSIRIS images were used to visually identify over 100 terraces (green) or strata – parallel layers of material (red dashed lines) – in exposed cliff walls and pits all over the comet surface (top: Hathor and surrounding regions on comet’s small lobe; bottom: Seth region on comet’s large lobe). Middle: a 3D shape model was used to determine the directions in which the terraces/strata are sloping and to visualise how they extend into the subsurface. The strata ‘planes’ are shown superimposed on the shape model (left panel) and alone (right panel) and show the planes coherently oriented all around the comet, in two separate bounding envelopes (scale bar indicates angular deviation between plane and local gravity vector). Right: local gravity vectors visualised on the comet shape model perpendicular to the terrace/strata planes further realise the independent nature of the two lobes. Credit: ESA/Rosetta/MPS for OSIRIS Team MPS/UPD/LAM/IAA/SSO/INTA/UPM/DASP/IDA; M. Massironi et al. (2015)

Will we one day use comets the way Neal Stephenson’s character describes in Seveneves? Supporting a human presence in deep space will involve ‘living off the land’ and utilizing resources like these. We’ll doubtless one day look back on the pioneering work of the Rosetta team and remember how much Comet 67P/Churyumov-Gerasimenko had to teach us.