If we had a space-based instrument fully capable of analyzing an exoplanet’s atmosphere in place right now, where would we find our best targets? The goal, of course, is to pluck out the signature of biological activity, which means we’re looking at planets in the habitable zone of their stars, that region where liquid water can exist on the surface. Right now there aren’t many planets that fit the bill, but the day is coming when there will be hundreds, then thousands. How we optimize our search time and choose the targets with the most likely pay-off is a major issue.

Which is where a new metric called the ‘habitability index for transiting planets’ comes into play. Developed by Rory Barnes and Victoria Meadows (University of Washington), working with research assistant Nicole Evans, the index is an attempt to prioritize the selection process, looking at those exoplanets that should be at the top of our list. Says Barnes:

“Basically, we’ve devised a way to take all the observational data that are available and develop a prioritization scheme, so that as we move into a time when there are hundreds of targets available, we might be able to say, ‘OK, that’s the one we want to start with.’”

Kepler has already given us a taste of what’s ahead, with its datasets rich in planets, but when we launch TESS (Transiting Exoplanet Survey Satellite) and later PLATO (PLAnetary Transits and Oscillations of stars), we’ll be looking at a much broader field. Bear in mind that Kepler took its ‘long stare’ out along the Orion Arm, where 156,000 stars were in range to be analyzed for the lightcurves that identify planetary transits. That’s a way of using brute force methods to get a statistical reading on how common various kinds of planets are in the galaxy.

But most of the stars in the Kepler field of view are hundreds if not thousands of light years away — fewer than one percent of them are closer than 600 light years. So the starfield in Cygnus and Lyra that gave us such sensational results with Kepler will now be supplanted with the search for planets closer to home, and a TESS field of view that will cover 400 times as much sky. TESS should be a good target-finder for the James Webb Space Telescope, whose launch in 2018 will open up the possibility of studying the atmospheres of such worlds. 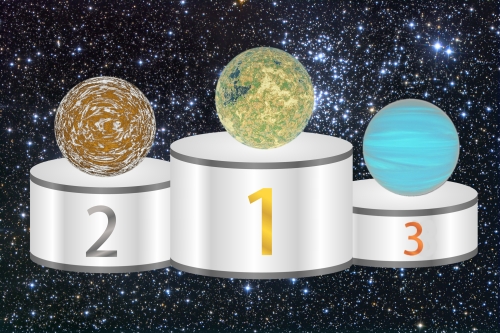 Image: UW astronomers Rory Barnes and Victoria Meadows of the Virtual Planetary Laboratory have created the “habitability index for transiting planets” to compare and rank exoplanets based on their likelihood of being habitable. Credit: Rory Barnes.

Barnes and Meadows presented their habitability index in a paper for The Astrophysical Journal called ‘Comparative Habitability of Transiting Exoplanets.’ The goal is to move well beyond what has thus far been the ‘first cut’ for habitable planets, the question of whether they can have liquid water on the surface. The index takes particular account of the planet’s ‘eccentricity-albedo degeneracy,’ which examines the energy reflected off its surface (albedo) and weighs it against the circularity of its orbit.

This gets into an interesting balancing act. High albedo means a great deal of light and energy being reflected back into space, so that less is available at the surface. And eccentric orbits can create intense periods of energy influx, during which the planet passes closest to its star. As the paper notes, there is an equilibrium that marks the most life-friendly zone given these factors. In the excerpt below, H refers to the habitability index number:

Our approach to comparative habitability assessments parameterizes the eccentricity-albedo degeneracy by calculating the fraction of all possible (A, e) [albedo, eccentricity] pairs that could produce a clement climate. We must also assess “rockiness” probabilistically based on inferences from the few planets with well-known masses and radii. Despite these assumptions, H can provide more insight into a planet’s potential to support life than simply comparing its orbit to that of its host star’s HZ.

Applying the index to the Kepler dataset produces some interesting results:

We ranked the known Kepler and K2 planets for habitability and found that several have larger values of H than Earth. This does not mean these planets are “more habitable” than Earth – it means that an Earth twin orbiting a solar twin that is observed by Kepler would not have the highest probability of being habitable. The best candidates have incident radiation levels, assuming circular orbits, of 60–90% that of Earth’s. These levels are about in the middle of the HZ, which is not surprising as our flux limits are derived from the models that produced the HZ. Our method is grounded in the fundamental observables and can, when applicable, fold in eccentricity constraints, and is therefore more powerful than the HZ for transiting exoplanets.

The age of the star can also be a useful data point when it comes to habitability. Here we look at the timescale on which life arises, a challenging issue because all we have to work with is what we know of life’s development on Earth. In general, the paper notes, planets in the habitable zone of F, G or K stars should see the last wave of giant impacts on their young surfaces at around 100 million years. Given that impacts likely sterilized our planet for several million years, this is an important issue, and stellar age, if known, can factor into the question of habitability.

A habitability index like this one isn’t designed for a single mission, but anticipates creating a target list we’ll want to investigate with a variety of technologies. The James Webb Space Telescope will be the first spacecraft that can perform transit transmission spectroscopy, but the paper notes that planets with high values of H could well be unobservable by JWST because of its detection capabilities. Barnes and Meadows examined four candidates for JWST spectroscopy — these were all Kepler or K2 detections — and found that even detecting water bands on these would be challenging for JWST. What TESS may identify as the best target for JWST won’t necessarily be the best target for later missions with different instrumentation.

Next post: AU Mic: Intriguing Features in a Protoplanetary Disk