The European Southern Observatory’s SPHERE instrument is turning up interesting things around the star AU Microscopii. Surrounded by a large dusty disk, the star is young enough to raise the interest of those studying how planets form. What has turned up are structures that Anthony Boccaletti (Observatoire de Paris) describes as ‘arch-like, or wave-like,’ a structure that his research team has never seen before. The issue is addressed in a new paper in Nature, which discusses five wave-like arches at different distances from the star.

Fortunately, AU Mic is a well studied star, with abundant Hubble imagery taken in 2010 and 2011 available for comparison. The results of that comparison are striking: The features do indeed show up on the Hubble imagery, but they show distinct change with time, meaning they are in rapid motion. “We reprocessed images from the Hubble data and ended up with enough information to track the movement of these strange features over a four-year period,” explains team member Christian Thalmann (ETH Zürich, Switzerland). “By doing this, we found that the arches are racing away from the star at speeds of up to about 40 000 kilometres/hour!” 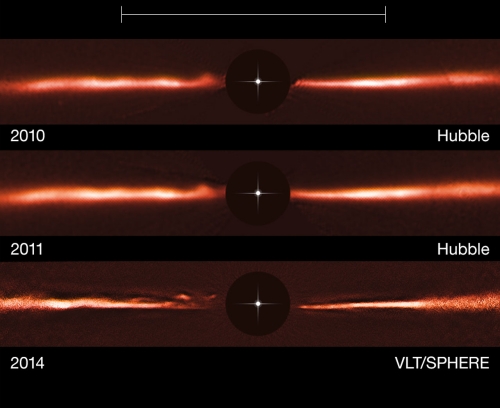 Image: Using images from ESO’s Very Large Telescope and the NASA/ESA Hubble Space Telescope, astronomers have discovered never-before-seen structures within a dusty disc surrounding a nearby star. The fast-moving wave-like features in the disc of the star AU Microscopii are unlike anything ever observed, or even predicted, before now. The origin and nature of these features present a new mystery for astronomers to explore. The results are published in the journal Nature on 8 October 2015. Credit: ESO.

Disturbances in a protoplanetary disk are always intriguing — think of the star Beta Pictoris, another object whose disk is well studied, with observations showing disk anomalies that flagged the presence of at least one fledgling planet. But what’s happening at AU Mic is challenging to understand. The arch-like features furthest from the star appear to be moving faster than those closer in, with at least three of them moving fast enough to escape AU Mic entirely. The team believes that they could not be caused by planets disturbing disk material as they orbit, nor do spiral waves triggered by disk instabilities offer an explanation.

Complicating the observations is the fact that we see AU Mic’s disk edge-on, making an examination of its three-dimensional structure all the more difficult. Is stellar activity the answer? Perhaps, says co-author Glenn Schneider (Steward Observatory, University of Arizona):

“One explanation for the strange structure links them to the star’s flares. AU Mic is a star with high flaring activity — it often lets off huge and sudden bursts of energy from on or near its surface. One of these flares could perhaps have triggered something on one of the planets — if there are planets — like a violent stripping of material which could now be propagating through the disc, propelled by the flare’s force.”

But the range of possibilities is large. From the paper:

Another case of interest may involve the presence of a planetary magnetosphere. Planetary magnetic field lines reconnect with the magnetized stellar wind creating a magnetotail which can lead to cyclical ejections of plasma out of the tail. Dust particles interacting with the ejected plasma are accelerated by the Lorentz force which is dominant over gravity. This would yield an outflow pointed away from the star, and may explain the super-Keplerian velocities of a few tens of km/s and possibly vertical transport with respect to the disk midplane. Such magnetotail ejections are observed in the solar system from Jupiter and Saturn 1–2 au away from the planet.

Just 32 light years from Earth, AU Mic is obviously going to receive a great deal of further observation, with the Boccaletti team planning to extend its work to the Atacama Large Millimeter/submillimeter Array (ALMA), located in the Atacama desert of northern Chile. SPHERE, meanwhile, is quickly proving itself in its first year of observation. An acronym for Spectro-Polarimetric High-contrast Exoplanet REsearch instrument, SPHERE takes as its domain the realm of direct exoplanet imaging, which of course includes debris disks.

To make these observations, the instrument, which is mounted on Unit Telescope 3 of the Very Large Telescope at ESO’s Paranal Observatory, uses a coronagraph to block out the bright central star as it examines planets or disks. The system also uses differential imaging, which plays off the fact that starlight is unpolarized, while starlight reflected off the surface of a planet or a dusty disk is partially polarized. SPHERE is designed to pick out the polarized signal, isolating it from the stream of unpolarized light by using special filters. Throw in adaptive optics to correct for turbulence in the Earth’s atmosphere and you get an instrument that can provide a sharp view of objects close to the central star, such as the now mysterious disk around AU Mic.