A Comparative Look at Solar Systems

With almost 2000 exoplanets now confirmed, not to mention candidates in the thousands, it’s amazing to recall that it was just twenty years ago that the first planet orbiting a main sequence star beyond the Solar System was found. Continued work on the world revealed that 51 Pegasi b is about half as massive as Jupiter, though 50 percent larger. Orbiting its star in roughly four days, the planet is some fifty light years from Earth. Thus we began to learn not just that exoplanets were out there, but that their environments could be truly extreme — remember that it was just in 1992 that planets were found around the pulsar PSR 1257+12.

Without any evidence other than my imagination, I grew up believing that most stars should have planets, and just assumed that their stellar systems were more or less like our own. There should be a few planets too close to their star for life to exist, and several gas giants out at the outskirts of the system, and somewhere in between there should be a world not so different from Earth. It was a naive view, but not completely implausible, and anyway, we lacked data.

Discovering ‘hot Jupiters’ is one way we began to realize that other configurations could exist, and the number of ‘super-Earths’ has made the same case. Just how ‘normal’ is our Solar System in the first place? A new paper from Rebecca Martin (University of Nevada, Las Vegas) and Mario Livio (Space Telescope Science Institute) tackles the question, comparing what we see in our Solar System to our growing database of exoplanetary information.

Obviously, this is a work in progress, for we’re not only still examining abundant Kepler and K2 data but continuing a robust planet hunt that looks forward to space-based missions like TESS (Transiting Exoplanet Survey Satellite) and PLATO (PLAnetary Transits and Oscillations of stars), surveys of considerable scope that should build our catalog of ‘nearby’ planets. Nonetheless, we can draw some conclusions based on what we see in the image below. 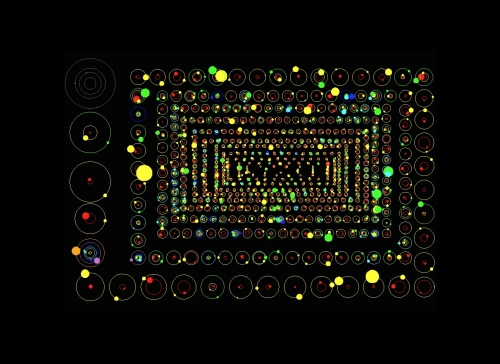 Image (click to enlarge): Model of all the multi-planet systems found by Kepler as of November 2013; our terrestrial planets are shown in grey at the top left for comparison. A new study examines how our solar system compares to the exoplanetary systems we’ve found. Credit: NASA/Kepler/Dan Fabricky.

Our Solar System is composed of a good deal more than planets, of course, which leads to an important caveat, one that Martin and Livio mention early on in the paper. We have two belts orbiting the Sun, the main asteroid belt and the Kuiper Belt. The problem is that although we can see a number of debris and dust belts around other stars, belts with as little mass as ours would not be observable to us around other stars. So a study like this one has to base its findings solely on planets. It can be mentioned, though, that hundreds of debris disk candidates are now in play, and about two-thirds of these are best modeled as two component disks.

That’s a plus for the idea that our Solar System isn’t all that atypical. What about the planets? The authors use a mathematical transformation that allows them to set up a statistical comparison. The low mean eccentricity of planets around our Sun is one area where we differ from other multi-planet systems — our planets move in largely circular orbits — but as the paper notes, our observation methods are biased toward finding high eccentricity planets. Circular orbits work to our benefit, for planets with low eccentricity are more likely to be dynamically stable. Indeed, the terrestrial planets in our system are thought to be stable until that distant time when the Sun becomes a red giant and disrupts the entire inner system.

What about age? The Sun is about half the age of the Milky Way disk, hardly setting up our system as special, and at least one study has found that about 80 percent of existing Earth-like planets were already formed when the Earth came into existence. We also know that terrestrial planets in the habitable zone of their host star appear to be common. The paper notes, for example, the work of Courtney Dressing and David Charbonneau, which uses Kepler data for M-dwarfs and finds an occurrence rate for Earth-sized planets in the habitable zone of 18% to 27%, a conservative estimate that Martin and Livio say could be as high as 50 percent (see How Common Are Potential Habitable Worlds in Our Galaxy?)

If we’re not unusual in terms of age or habitability, we do differ considerably from other systems in two respects. First, we have no planets inside the orbit of Mercury, in contrast to systems with rocky worlds on far closer orbits. Moreover, the Solar System lacks a super-Earth, a category of planet now turning out to be common.

The paper summarizes its findings this way:

We find that the properties of the planets in our solar system are not so significantly special compared to those in exosolar systems to make the solar system extremely rare. The masses and densities are typical, although the lack of a super-Earth-sized planet appears to be somewhat unusual. The orbital locations of our planets seem to be somewhat special but this is most likely due to selection effects and the difficulty in finding planets with a small mass or large orbital period. The mean semi-major axis of observed exoplanets is smaller than the distance of Mercury to the Sun. The relative depletion in mass of the solar system’s terrestrial region may be important. The eccentricities are relatively low compared to observed exoplanets, although the observations are biased toward finding high eccentricity planets. The low eccentricity, however, may be expected for multi-planet systems. Thus, the two characteristics of the solar system that we find to be most special are the lack of super-Earths with orbital periods of days to months and the general lack of planets inside of the orbital radius of Mercury.

So while we’ve had quite a few surprises in the past twenty-five years, going from no exoplanets known to planets around pulsars and then main sequence stars, and moving from those early detections to thousands of candidates, we’re not seeing anything that would peg us as being unique. In terms of habitability, the authors see nothing in the Solar System that would make it especially conducive to life’s formation as opposed to other planetary systems:

If exosolar life happens to be rare it would probably not be because of simple basic physical parameters, but because of more subtle processes that are related to the emergence and evolution of life. Since at the moment we do not know what those might be, we can allow ourselves to be optimistic about the prospects of detecting exosolar life.

The paper is Martin and Livio, “The Solar System as an Exoplanetary System,” The Astrophysical Journal Vol. 810, No. 2 (3 September 2015). Full text.