Kepler-47 is an eclipsing binary some 4900 light years from Earth in the direction of the constellation Cygnus. It’s a system containing two transiting circumbinary planets, meaning the planets orbit around the binary pair rather than around one or the other star. That configuration caught the eye of Simon Porter, a postdoc at the Southwest Research Institute, because the configuration is so similar to another circumbinary system, the one involving four small moons around Pluto/Charon. In both cases, we have a binary at the center of the orbit. Porter writes about the configuration in this post from the New Horizons team.

In the case of Pluto, the binary could be considered a binary planet, with Charon the other half of the duo. Both are orbited by a system of four moons, each of them less than 50 kilometers in diameter, the moons orbiting around the system’s center of mass. New Horizons, the gift that keeps on giving, has already sent some striking images of these small moons, but we have even better imagery yet to come as we continue to download data from the craft’s Long Range Reconnaissance Imager (LORRI), the high resolution camera that has given us so so many unforgettable images already. But I’ll open the week with an image not from LORRI but from the Multispectral Visible Imaging Camera, just to provide a sense of context and a bit of awe. 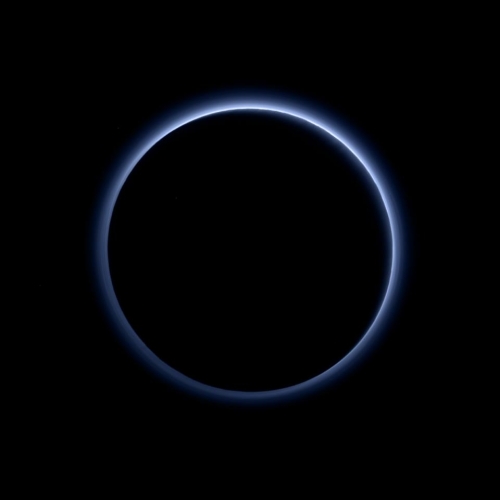 Image: Pluto’s haze layer shows its blue color in this picture taken by the New Horizons Ralph/Multispectral Visible Imaging Camera (MVIC). The high-altitude haze is thought to be similar in nature to that seen at Saturn’s moon Titan. The source of both hazes likely involves sunlight-initiated chemical reactions of nitrogen and methane, leading to relatively small, soot-like particles (called tholins) that grow as they settle toward the surface. This image was generated by software that combines information from blue, red and near-infrared images to replicate the color a human eye would perceive as closely as possible. Credit: NASA/JHUAPL/SwRI.

Blue atmospheric haze in the Kuiper Belt is not something anyone was expecting. SwRI’s Carly Howett offers a read on what we’re seeing:

“That striking blue tint tells us about the size and composition of the haze particles. A blue sky often results from scattering of sunlight by very small particles. On Earth, those particles are very tiny nitrogen molecules. On Pluto they appear to be larger — but still relatively small — soot-like particles we call tholins.”

This JHU/APL news release has more, explaining current thinking that tholins form in the upper atmosphere as ultraviolet light breaks nitrogen and methane molecules apart, allowing them to form increasingly complex negatively and positively charged ions that recombine to form macromolecules. Small particles can grow out of the process, with volatile gases condensing to coat their surfaces before they fall back to the surface, adding to its reddish hue.

But back to the system of moons. The closest to New Horizons during the July encounter was Nix, of which LORRI has delivered three close-ups so far. Have a look at the object as, in the second view, it reveals its ‘potato-like’ aspect — the elongation is lost in the first image because we’re looking down the long axis. What stands out here is the size of that crater. Are we looking at a fragment of an older moon, as Porter speculates, or was Nix just lucky to have survived a shot that could leave a crater of that size on such a small surface? A crescent Nix shows up on the far right, which may yield information on the surface of the diminutive moon. 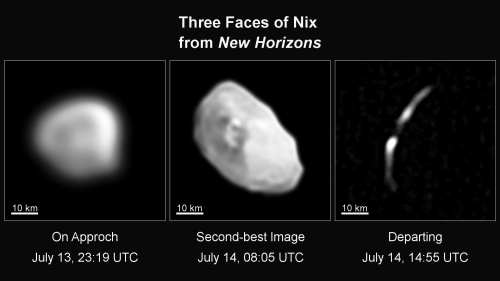 Now have a look at Nix as seen through the Ralph/Multispectral Visible Imaging Camera. Here we’re working with only a quarter of LORRI’s resolution, but we’ve got color now and can discern that most of Nix is white, while that provocative crater and the ejecta it produced show up as reddish. It’s a natural assumption that Nix’s interior is made up of much darker material than the surface. “We don’t actually know what either the dark or the light material is,” writes Porter, “nor will we be able to tell until we download the Nix data from the Ralph-Linear Etalon Imaging Spectral Array (LEISA) composition mapping spectrometer.” 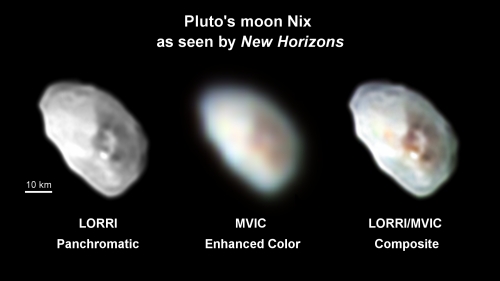 Below is Hydra as seen through LORRI, with the caveat that this moon was on the other side of Pluto during close approach, so we don’t have the same level of resolution we had for Nix. Porter notes a certain similarity in aspect with another object that caught our attention this summer: Comet 67P/Churyumov-Gerasimenko, around which the ESA’s Rosetta spacecraft continues its operations. In both cases, we have the possibility of a low-speed collision which melded two originally separate objects. The images of Styx and Kerberos that we’ll get later in the year, by the way, should be of roughly the same resolution as this image of Hydra. 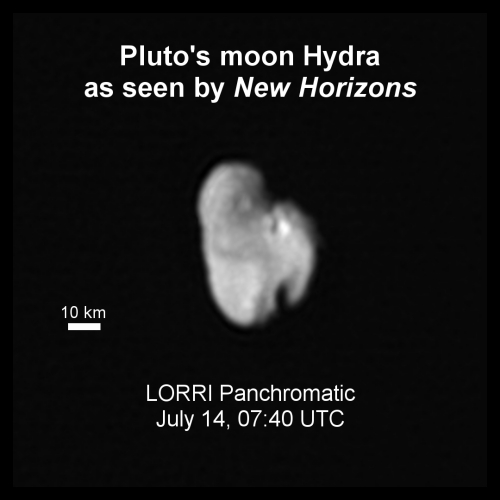 New Horizons also detected surface water ice on Pluto, with areas showing the most apparent water ice signatures corresponding to areas that appear red in other recent images of Pluto. Figuring out how water ice interacts with the reddish tholins is going to take some work.

Image: Regions with exposed water ice are highlighted in blue in this composite image from New Horizons’ Ralph instrument, combining visible imagery from the Multispectral Visible Imaging Camera (MVIC) with infrared spectroscopy from the Linear Etalon Imaging Spectral Array (LEISA). The strongest signatures of water ice occur along Virgil Fossa, just west of Elliot crater on the left side of the inset image, and also in Viking Terra near the top of the frame. A major outcrop also occurs in Baré Montes towards the right of the image, along with numerous much smaller outcrops, mostly associated with impact craters and valleys between mountains. The scene is approximately 450 kilometers across. Note that all surface feature names are informal. Credit: NASA/JHUAPL/SwRI.

In addition to the sheer thrill of seeing places as tiny as Nix at some level of detail, not to mention the often startling and mesmerizing views of Pluto and Charon themselves, I note the fact that exoplanets have become so common that we can draw analogies from our catalogues to describe what we see in our own system, as Simon Porter did in his description of Pluto’s moons. The world has changed so much in the past twenty years of exoplanet hunting, meaning that our view of ourselves and our place in the universe has been much enriched, and we have a panoply of planetary configurations to draw on as we consider how solar systems are made.