Catching Up with the Outer System

We now pivot from Dysonian SETI to the ongoing exploration of our own system, where lately there have been few dull moments. Today the Cassini Saturn orbiter will make its deepest dive ever into the plume of ice, water vapor and organic molecules streaming out of four major fractures (the ‘Tiger Stripes’) at Enceladus’ south polar region. The plume is thought to come from the ocean beneath the moon’s surface ice, and while Cassini is not able to detect life, it is able to study molecular hydrogen levels and more massive molecules including organics. Understanding the hydrothermal activity taking place on Enceladus helps us explore the possible habitability of the ocean for simple forms of life. 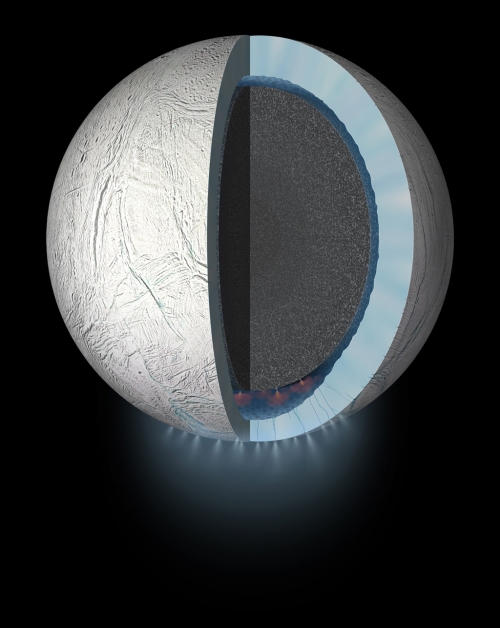 Image: This artist’s rendering showing a cutaway view into the interior of Saturn’s moon Enceladus. NASA’s Cassini spacecraft discovered the moon has a global ocean and likely hydrothermal activity. A plume of ice particles, water vapor and organic molecules sprays from fractures in the moon’s south polar region. Credit: NASA/JPL-Caltech.

Cassini’s cosmic dust analyzer (CDA) instrument can detect up to 10,000 particles per second, telling us how much material the plume is spraying into space from the internal ocean. Another key measurement in the flyby will be the detection of molecular hydrogen by the spacecraft’s INMS (ion and neutral mass spectrometer) instrument, says Hunter Waite (SwRI):

We’re also going to get a better picture of the plume’s structure — individual jets or ‘curtain’ eruptions — that may clarify how material is making its way to the surface from the ocean below. Cassini will move through the plume at an altitude of 48 kilometers, which is about the distance between Baltimore and Washington, DC. “We go screaming by all this at speeds in excess of 19,000 miles per hour,” says mission designer Brent Buffington. “We’re flying the deepest we’ve ever been through this plume, and these instruments will be sensing the gases and looking at the particles that make it up.” Cassini has just one Enceladus flyby left, on December 19.

NASA’s online toolkit for the final Enceladus flybys can be found here.

Meanwhile, in the Kuiper Belt…

Although its mission at Pluto/Charon has been accomplished, there are a lot of reasons to be excited about New Horizons beyond the data streaming back from the spacecraft. On October 25th, mission controllers directed a targeting maneuver using the craft’s hydrazine thrusters, one that lasted about 25 minutes and was the largest propulsive maneuver ever conducted by New Horizons. The burn, the second in a series of four, adjusts the spacecraft’s trajectory toward Kuiper Belt object 2014 MU69.

If all goes well (and assuming NASA signs off on the extended mission), the encounter will occur on January 1, 2019. The science team intends to bring New Horizons closer to MU69 than the 12500 kilometers that separated it from Pluto on closest approach. Two more targeting maneuvers are planned, one for October 28, the other for November 4. Every indication from data received at the Johns Hopkins University Applied Physics Laboratory is that the Sunday burn was successful. We now have a new destination a billion miles further out than Pluto. 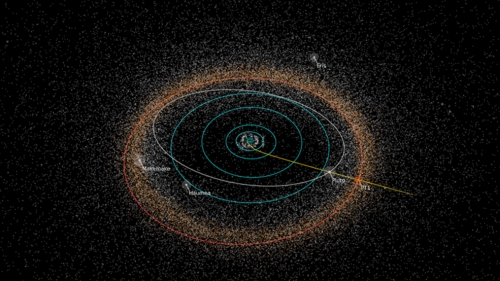 Image: Path of NASA’s New Horizons spacecraft toward its next potential target, the Kuiper Belt object 2014 MU69. Although NASA has selected 2014 MU69 as the target, as part of its normal review process the agency will conduct a detailed assessment before officially approving the mission extension to conduct additional science. Credit: NASA/Johns Hopkins University Applied Physics Laboratory/Southwest Research Institute/Alex Parker.

Remember that this is a spacecraft that was designed for operations in the Kuiper Belt, one that carried the extra hydrazine necessary for the extended mission, and one whose communications system was designed to operate at these distances. The science instruments aboard New Horizons were also designed to operate in much lower light levels than the spacecraft experienced at Pluto/Charon, and we should have enough power for many years.

Principal investigator Alan Stern commented on the choice of this particular Kuiper Belt object (also being called PT1 for ‘Potential Target 1’) at the end of the summer, noting its advantages:

“2014 MU69 is a great choice because it is just the kind of ancient KBO, formed where it orbits now, that the Decadal Survey desired us to fly by. Moreover, this KBO costs less fuel to reach [than other candidate targets], leaving more fuel for the flyby, for ancillary science, and greater fuel reserves to protect against the unforeseen.”

What we know about 2014 MU69 is that it is about 45 kilometers across, about ten times larger than the average comet, and 1000 times more massive. Even so, it’s only between 0.5 and 1 percent of the size of Pluto, and 1/10,000th as massive. Researchers consider objects like these the building blocks of dwarf worlds like Pluto. While we’ve visited asteroids before, Kuiper Belt objects like this one are thought to be well preserved samples of the early Solar System, having never experienced the solar heating that asteroids in the inner system encounter.

We also have a newly received image of Pluto’s tiny moon Kerberos, which turns out to be smaller and much more reflective than expected, with a double-lobed shape. The larger lobe is about eight kilometers across, the smaller approximately 5 kilometers. Mission scientists speculate that the moon was formed from the merger of two smaller objects. Its reflectivity indicates that it is coated with water ice. Earlier measurements of the gravitational influence of Kerberos on the other nearby moons were evidently incorrect — scientists had expected to find it darker and larger than it turns out to be, another intriguing surprise from the Pluto system. 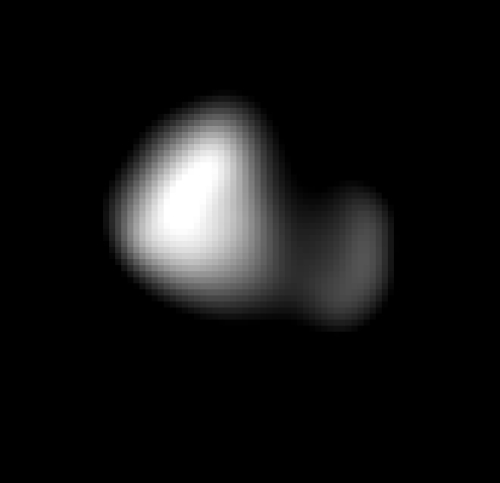 Image: This image of Kerberos was created by combining four individual Long Range Reconnaissance Imager (LORRI) pictures taken on July 14, 2015, approximately seven hours before New Horizons’ closest approach to Pluto, at a range of 396,100 km from Kerberos. The image was deconvolved to recover the highest possible spatial resolution and oversampled by a factor of eight to reduce pixilation effects. Kerberos appears to have a double-lobed shape, approximately 12 kilometers across in its long dimension and 4.5 kilometers in its shortest dimension. Credit: NASA/Johns Hopkins University Applied Physics Laboratory/Southwest Research Institute.