No one interested in the prospects for life on other worlds should take his or her eyes off Europa for long. We know that its icy surface is geologically active, and that beneath it is a global ocean. While water ice is prominent on the surface, the terrain is also marked by materials produced by impacts or by irradiation. Keep in mind the presence of Io, which ejects material like ionized sulfur and oxygen that, having been swept up in Jupiter’s magnetosphere, eventually reaches Europa. Irradiation can break molecular bonds to produce sulfur dioxide, oxygen and sulfuric acid. And we’re learning that local materials can be revealed by geology.

A case in point is a new paper that looks at infrared data obtained with the adaptive optics system at the Keck Observatory. The work of Mike Brown, Kevin Hand and Patrick Fischer (all at Caltech, where Fischer is a graduate student), suggests that the best place to look for compounds indicative of life would be in the jumbled areas of Europa called chaos terrain. Here we may have materials brought up from the ocean below.

“We have known for a long time that Europa’s fresh icy surface, which is covered with cracks and ridges and transform faults, is the external signature of a vast internal salty ocean,” says Brown, and our imagery of these areas taken by Galileo shows us a shattered landscape, with great ‘rafts’ of ice that have broken, moved and later refrozen. The clear implication is that water from the internal ocean may have risen to the surface as these chaos areas shifted and cracked. And while a direct sampling of Europa’s ocean would be optimal, our best bet for studying its composition for now may well be a lander that can sample frozen deposits. 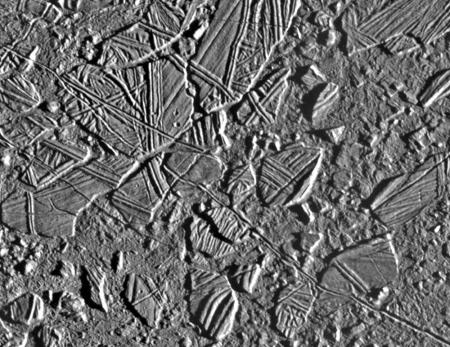 Image: On Europa, “chaos terrains” are regions where the icy surface appears to have been broken apart , moved around, and frozen back together. Observations by Caltech graduate student Patrick Fischer and colleagues show that these regions have a composition distinct from the rest of the surface which seems to reflect the composition of the vast ocean under the crust of Europa. Credit: NASA/JPL-Caltech.

Brown and team, whose work has been accepted at The Astrophysical Journal, examined data taken in 2011 using the OSIRIS spectrograph at Keck, which measures spectra at infrared wavelengths. Keck is also able to bring adaptive optics into play to sharply reduce distortions produced by Earth’s atmosphere. Spectra were produced for 1600 different locations on the surface of Europa, then sorted into major groupings using algorithms developed by Fischer. The results were mapped onto surface data produced by the Galileo mission.

The result: Three categories of spectra showing distinct compositions on Europa’s surface. From the paper:

The first component dominates the trailing hemisphere bullseye and the second component dominates the leading hemisphere upper latitudes, consistent with regions previously found to be dominated by irradiation products and water ice, respectively. The third component is geographically associated with large geologic units of chaos, suggesting an endogenous identity. This is the first time that the endogenous hydrate species has been mapped at a global scale.

We knew about Europa’s abundant water ice, and we also expected to find chemicals formed from irradiation. The third grouping, though, being particularly associated with chaos terrain, is intriguing. Here the chemical indicators did not identify any of the salt materials thought to be on Europa. The paper continues:

The spectrum of component 3 is not consistent with linear mixtures of the current spectral library. In particular, the hydrated sulfate minerals previously favored possess distinct spectral features that are not present in the spectrum of component 3, and thus cannot be abundant at large scale. One alternative composition is chloride evaporite deposits, possibly indicating an ocean solute composition dominated by the Na+ and Cl− ions. 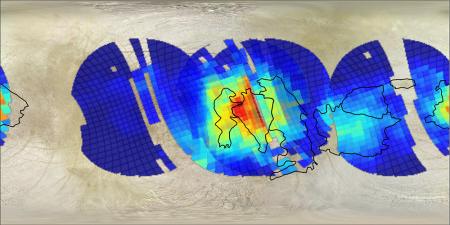 Image: Mapping the composition of the surface of Europa has shown that a few large areas have large concentrations of what are thought to be salts. These salts are systematically located in the recently resurfaced “chaos regions,” which are outlined in black. One such region, named Western Powys Regio, has the highest concentration of these materials presumably derived from the internal ocean, and would make an ideal landing location for a Europa surface probe.
Credit: M.E. Brown and P.D. Fischer/Caltech , K.P. Hand/JPL.

The association with chaos areas is significant. Because these spectra map to areas with recent geological activity, they are likely to be native to Europa, and conceivably material related to the internal ocean. In this Caltech news release, Brown speculates that a large amount of ocean water flowing out onto the surface and then evaporating could leave behind salts. As in the Earth’s desert areas, the composition of the salt can tell us about the materials that were dissolved in the water before it evaporated. Brown adds:

“If you had to suggest an area on Europa where ocean water had recently melted through and dumped its chemicals on the surface, this would be it. If we can someday sample and catalog the chemistry found there, we may learn something of what’s happening on the ocean floor of Europa and maybe even find organic compounds, and that would be very exciting.”

So we’re learning where a Europa lander should be able to do the most productive science in relation to astrobiology and the ocean beneath the ice. Keep your eye on the western portion of the area known as Powys Regio, where the Caltech team found the strongest concentrations of local salts. Powys Regio is just south of what appears to be an old impact feature called Tyre. The image below, with the concentric rings of Tyre clearly visible, reminds us that an ocean under a mantle of ice is vulnerable to surface activity and external strikes that would break through the ice and deposit ocean materials within reach of the right kind of lander. 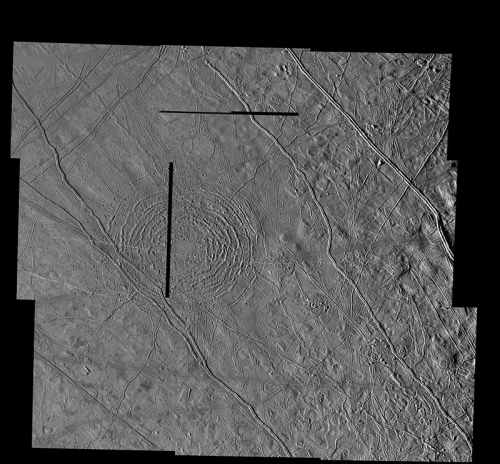 The paper is Fischer, Brown & Hand, “Spatially Resolved Spectroscopy of Europa: The Distinct Spectrum of Large-scale Chaos,” accepted at The Astrophysical Journal (preprint).